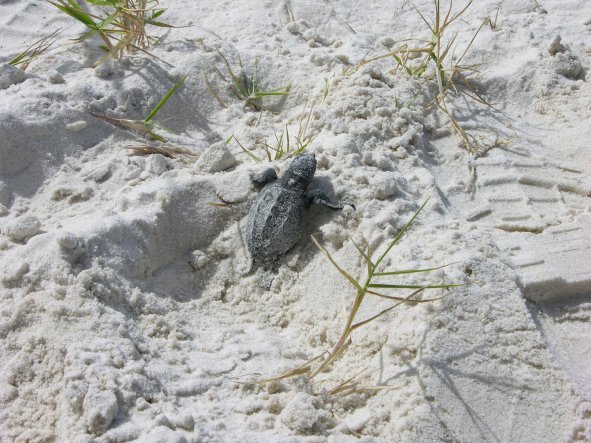 Yesterday, Center for Biological Diversity and Turtle Island Restoration Network* filed their 60-day intent to sue BP over the deaths of endangered sea turtles in during “controlled burns” BP uses to consume oil slicks. Thus far, there have been 275 burns consuming 10 million gallons of oil. The intent to sue got plenty of media attention, but there’s another legal action that may change BP’s interactions with sea turtles faster. Yesterday, Meyers, Glitzenstein, & Crystal (MG&C) filed for an immediate injunction of BP’s controlled burns until wildlife safety can be assured. The injunction says BP is violating the Endangered Species Act with the burns, (“corralling and burning alive endangered and threatened sea turtles”) and by doing so, is in also in violation of its lease with MMS and the Outer Continental Shelf Lands Act.

What’s interesting is that when MG&C initially filed the complaint yesterday, they only named BP as the defendant. BP’s legal team pushed back, noting that they weren’t the only ones responsible for the burns: the Coast Guard was liable too. So this morning, MG&C filed an amended complaint (PDF) naming both parties. (See a list of legal documents related to BP here.) It’s curious that BP named the Coast Guard as being partially responsible for the burns, when BP seems to be running the entire show down in the Gulf.

BP hasn’t been conducting burns this week: rough waves from Hurricane Alex are a safety hazard for smaller boats. But it seems that burning sea turtles alive has been confirmed: the UK Guardian reports that “the Obama administration confirmed” that sea turtles like the endangered Kemp’s Ridley are “burnt alive in operations intended to contain oil.” There’s also new information from Captain Mike Ellis, subject of the controversial video that surfaced earlier this month. He gave written testimony (PDF) in support of the previously mentioned injunction that:

“On the trip…where approximately 10 endangered turtles were rescued, we were very near multiple burns, and, more importantly, those burns were on the same oil line as the turtles that we were able to rescue. As any marine scientist or professional sea fisherman knows, species of marine animals that are found on one part of an oil line… are very likely to be found going in either direction on that same line… Because BP has refused to let me and other boat captains get close enough to examine the burn boxes prior to igniting the fires, I expect that turtles will continue to be burned.”

Dr. Mike Ziccardi, who’s heading rescue operations in the Gulf, said last week that there was a pilot program for turtle biologists or other wildlife experts to accompany burn unit team. But as turtle rescues are temporarily suspended due to weather, we’ll have to wait and see how that program is implemented. In the meantime, rescuers are moving turtle eggs: about 700 to 800 nests of them. The eggs will be incubated in Styrofoam boxes  and the hatchlings released to the Atlantic Ocean. Although Audubon has said that it’s likely turtles would use their internal homing device to return to the Gulf, moving the eggs seems to be the only way to protect them from oil washing up on the beach, as well as foot-traffic from clean-up teams. It was announced today that FedEx will partner with the National Fish and Wildlife Foundation to transport the eggs, which will “travel exclusively in FedEx Custom Critical air-ride, temperature-controlled vehicles.” Safe travels.

*Full disclosure: Mother Jones publisher Steve Katz is on the Board of the Turtle Island Restoration Network/Sea Turtle Restoration Project