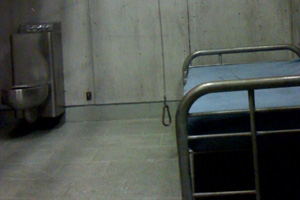 In the past few weeks, we’ve seen two separate stories of prisoners who died alone in their cells, while their moans of pain and cries for help were ignored by prison staff. If this isn’t cruel and unusual punishment, it’s hard to see what would be.

At the Onondaga County Justice Center in upstate New York, 21-year-old Chuniece Patterson died last year from a ruptured ectopic pregnancy. What is described by the local news station as “a blistering report” on the death has just been issued by the New York State Commission of Correction; it states: “Had Patterson received adequate and competent medical care, her death would have been prevented.”

Chuniece Patterson was pregnant and complaining of abdominal pain in her cell at the Justice Center jail in Syracuse. Fourteen hours later, she was dead.

The jail’s records of Patterson’s medical care give no indication that anyone examined her abdomen. No pelvic exam. No ultrasound. Any of them would’ve shown she had an ectopic pregnancy in her fallopian tube and would’ve probably indicated that it had ruptured, according to a doctor. Surgery could’ve saved her life, he said.

The records of Patterson’s two-day stay at the Justice Center in November describe a night of torment, with Patterson screaming and rolling on the cement floor of her cell for most of those 14 hours. Patterson leaned against her cell toilet, scooping water out with a cup and splashing it onto her face, a deputy reported.

On the night before she died, Patterson had severe abdominal pain and vomiting; a nurse checked her three times but took no action. Early the next morning, the paper reports, a guard was told that Patterson “had been moaning overnight and complaining that she was having trouble breathing.” Making her rounds, the guard “saw Patterson on the floor four times between 7 a.m. and 7:45 a.m.,” but again took no action. The Post-Standard story describes the report made by the guard, Deputy Diane Stech, of her repeated visits to the dying woman’s cell:

At 7:30 a.m., Stech found Patterson on the floor again. The deputy went into the cell, saw the plastic cup in the toilet and removed it, the report said. “I looked down at inmate Patterson, again told inmate to get off the floor,” Stech wrote. “It looked as if the inmate looked at me. I continued with my tour.”

On her last visit to Patterson’s cell, Stech found her unresponsive, the report said. Stech called in other deputies and medical workers, who tried to revive her, the records show.

At 8:30, Chuniece Patterson was pronounced dead at a local hospital. Patterson had been arrested on a bench warrant after missing a court appearance, on charges that involved stealing beer and smashing the counter in a convenience store. She had not been convicted of the crime. The jail where she died had been cited by the Justice Department in the 1990s for “grossly inadequate” medical care. And 14 years ago, another inmate died of a ruptured ectopic pregnancy there, after three nurses and a doctor “repeatedly failed to monitor [her] worsening condition,” according to the Commission of Correction

Just a week after the state of New York issued its report on the death of Chuniece Patterson, the Associated Press put out a story on the death of an inmate last fall at Pekin Federal Prison in Illinois. The case was recently investigated by the FBI, and the Justice Department is now deciding whether the prisoner’s civil rights were violated.

For days before he died from internal bleeding in a federal prison, Adam Montoya pleaded with guards to be taken to a doctor, pressing a panic button in his cell over and over to summon help that never came.

An autopsy concluded that the 36-year-old inmate suffered from no fewer than three serious illnesses—cancer, hepatitis, and HIV. The cancer ultimately killed him, causing his spleen to burst. Montoya bled to death internally.

But the coroner and a pathologist were more stunned by another finding: The only medication in his system was a trace of over-the-counter pain reliever.

That means Montoya, imprisoned for a passing counterfeit checks, had been given nothing to ease the excruciating pain that no doubt wracked his body for days or weeks before death…

The coroner said guards should have been aware that something was seriously wrong with the inmate. And outside experts agree that the symptoms of cancer and hepatitis would have been hard to miss: dramatic weight loss, a swollen abdomen, yellow eyes.

During Montoya’s final days, he “consistently made requests to the prison for medical attention, and they wouldn’t give it to him,” said his father, Juan Montoya, who described how his son repeatedly punched the panic button. Three inmates corroborated that account in interviews with The Associated Press.

The younger Montoya was taken to the prison clinic one day for “maybe five, 10 minutes,” his father said. “And they gave him Tylenol, and that was it. He suffered a lot.”…

The last time a staff member visited Montoya, about 10 p.m. on Nov. 12, he reported having trouble breathing and complained that he could no longer feel his fingers, Rader said in the e-mail interview. The staff member told Montoya that he would try to get help the next day.

Around 6:30 a.m., prison officials found Montoya’s body in his cell.

Montoya, who was serving a two-year sentence for counterfeiting checks and credit cards, was at Pekin for only a few weeks before he died. “The inmates around him say he spent much of that time pleading for help from his cell,” according to the AP. The prisoner in the next cell said prison staff told Montoya he had the flu. “That man begged these people for nine days locked behind these doors,” he wrote in a letter to his mother following Montoya’s death.

Apparently, the conventional wisdom among prison staff is that a certain percentage of inmates who claim to be physically or mentally ill are actually faking it, or “malingering,” in order to get some kind of special treatment. It’s still hard to believe that guards would ignore such persistent cries of agony—except in a society like ours, where prisoners are no longer viewed as human beings.