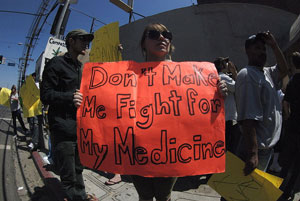 It may come as no surprise that in nearly every California county, young black people are arrested for possessing marijuana at higher rates per capita than white people.  That’s despite evidence that black people use marijuana at lower rates than white people. But this data on state arrests which was released in June by the Drug Policy Alliance [PDF] has motivated groups like the California NAACP, the California Black Chamber of Commerce, and the National Black Police Association to publicly endorse Proposition 19, the November ballot initiative that would legalize pot possession and use among adults in California.

The report points out that a reason for the racial disparity in marijuana arrests is the heavier placement of narcotics and patrol officers in certain neighborhoods deemed “high crime.” “High crime” neighborhoods are usually disproportionately poor and populated by people of color. In 2008, for example, police departments in California arrested more than 60,000 people for possessing marijuana, according to the report. Across the state’s 25 largest counties, black people represented 7 percent of the population but 20 percent of arrests for marijuana possession. That year alone in Santa Cruz County, where black people comprised less than two percent of the total population (that’s about 3,012 black folks),  black people made up five percent of marijuana arrests. The full 12-page report which includes more county stats is available here [PDF].

Alice Huffman, president of the California NAACP, recently took to the San Francisco Chronicle’s op-ed page with this data to make a case on why marijuana reform is a civil rights issue. Huffman wrote:

We believe whatever potential harms may be associated with using marijuana are more than outweighed by the immediate harms that derive from being caught up in the criminal justice system.

Not all black organizations are on board Huffman’s legalization train of thought however. Patrick R. Melvin, president of the National Organization of Black Law Enforcement Executives (NOBLE), which bills itself as “the conscience of law enforcement,” stated in a press release:

NOBLE has and continues to be concerned about disparities in sentencing and treatment in the criminal justice system, however, this legislation will not eradicate that issue. Instead of proposing to legalize drugs, I feel there should be a movement afoot to address underlying systemic issues that affect our communities and the issue of bias-based policing across this country.

The NOBLE release then goes on to label marijuana a gateway drug that children need to be protected from. To decide for yourself, you can read the entirety of Proposition 19 here.