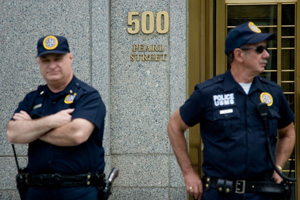 Police outside the Manhattan courthouse where Ahmed Ghailani is being tried. John Mantel / Zumapress.com

The first morning of the trial of Ahmed Ghailani, the sole Guantanamo detainee to stand trial in a civilian court to date, began with a change in policy. “No newspapers, phones, or liquids” as of today, the security guards informed us as they removed BlackBerrys and bottles of water from our purses and briefcases with latex-gloved hands. But inside the courtroom, little had changed. Mr. Ghailani was wearing his powder blue sweater and coordinating tie. The defense attorney, Peter Quijano, sported his usual designer suit with a silk handkerchief in his breast pocket. The prosecutors stood businesslike at the lectern ready to call their witnesses. The only difference on day two of the trial was the half-empty visitors’ area, populated by just over 50 people—families of victims, journalists, interested lawyers, and NGO observers like myself. On opening day the benches had been packed; during the months of pre-trial hearings that preceded it, they were almost entirely empty.

Witness after witness recalled the bombing of the American Embassy in Dar es Salaam in August of 1998. They described the intensity of the blast—”the sound went right through my body,” the way the explosion stopped all the clocks, the sight of blood and bodies and body parts, the friends they never saw again. The defense asked very little, careful perhaps not to allow the jury to dwell on the suffering any further; its few questions seemed aimed at establishing the kinds of security—public, private, American, and Tanzanian—that were responsible for protecting the embassy.

Throughout the day, Judge Lewis Kaplan made it clear that not a detail escapes him. “Excuse me,” he interrupted a translator at one point. “I don’t know any Swahili but I heard [the prosecutor’s] question and when you translated it [into Swahili], you used the English term control group, which was not mentioned in the question… Be careful.” So, too, it was the judge who extracted critical clarifications about the position of parked cars and the orientation of the Embassy and the guardhouses.

The detailed testimony took us on a journey into a world in which those attending the trial will likely be immersed for several months—especially given that the defense, in its opening statement, said it wanted to demonstrate how different Tanzania is from the United States. Understanding that difference, Ghailani’s attorneys had argued, would convince the jurors of their client’s innocence.

All told, the day was a good reminder of something that both defense attorneys and prosecutors have said about the importance of civilian trials for terrorism suspects: The public can learn immensely from these trials. Not just about the nature of the threat—the United States learned a great deal about al Qaeda and Osama bin Laden from the trial of the first World Trade Center bombers—but also about how the details of a crime can contextualize it. Destruction that seemed incomprehensible from a distance becomes, up close, both more human and more real.