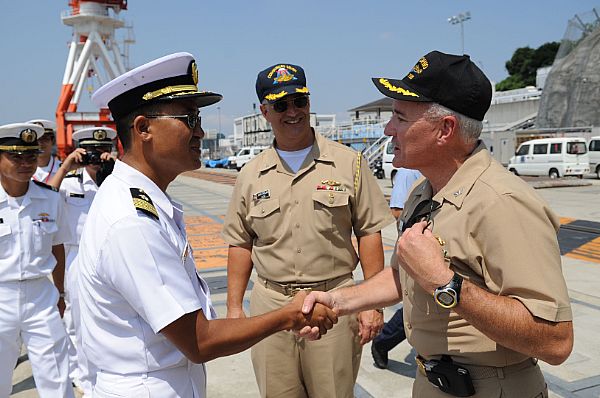 Capt. Ronald Murray Gero has had a hard month, and far be it from me to pile on him personally. But you’d think that the 35-year veteran of the service, a captain of two different nuclear subs who trains other sub skippers, would know better than to flirt on the phone while steering his Tomahawk missile-laden boat through hazardous Hawaiian waters.

The Navy yanked Gero from his job as commanding officer of the USS Ohio last month for what, at the time, it called a “loss of confidence” in his leadership, owing to “improper personal behavior that eroded good order and discipline.” New details unearthed by Navy Times this week show that the married Gero was engaging in a strange relationship with a female officer, to the point that he’d sloughed off his work. As right-wingers continue to insist that gays will corrupt the military and women will sink subs, an embarrasingly straight Gero goes down as the 15th ship’s captain to be fired this year for not-gay misconduct.

Pity Gero. If his biography and the comments on this submariner’s blog are indication, he had been a good officer. But in a (sometimes petty-sounding) report, the Navy insisted his affection for a mystery heartthrob clouded his ability to command a multibillion-dollar lethal weapon:

Then came the phone calls. During surface transits, Gero sometimes made calls on his government cell phone from the bridge atop the ship’s sail, in close proximity to others. They recalled Gero starting conversations with a vague greeting like “Hey you,” to avoid saying the person’s name, while covering the handset and speaking in a hushed tone. Sometimes, Gero would even say things like, “Our bosses wouldn’t be very happy if we did that.” This was in marked contrast to conversations with his wife, to whom he spoke in normal tones, shipmates said…

Calls to the woman distracted him July 24 when his vigilance was needed most: a transit out of port, according to phone records and the ship’s schedule, which were reviewed by investigators.

“It appears that Capt. Gero also lost focus of his mission on at least one occasion, where he was spending time talking to [name redacted] while piloting the [submarine] through Pearl Harbor’s restricted waters,” their report states.

Got all that? OK, now, consider this: Tony Perkins, head of the Family Research Council, lobbies against gays in the military by citing what he calls “legitimate worries about the consequences of increased sexual tension,” which “would threaten the readiness of the force.” And the Navy itself has defended its ban on women in subs by arguing (PDF) that making the boats gender-neutral “would significantly impact the submarine force’s already strained ability to meet valid operational requirements.” Translation: Gays and ladies would leave America’s military less prepared, and America less safe.

You know, like jabbering on a cell phone to your schoolboy crush while trying to keep a 560-foot nuke boat in its safe-driving lane.

Once, in happier times, Gero gave a speech extolling the virtues of his straight-dude colleagues in the sub service. “Keep these men in mind,” he said, “for they are the present, and the future, of our country’s defense.”

Don’t you feel safer knowing Gero’s guys are on patrol? God forbid we should mess that up with queers and chicks.