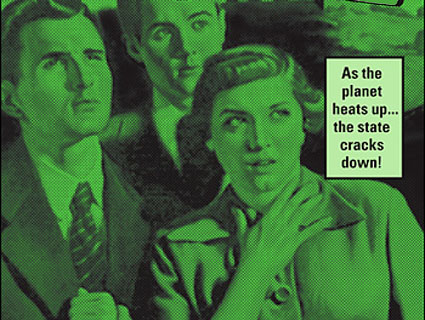 One morning back in 2002, Will Potter, a young newspaper reporter on the metro desk at the Chicago Tribune, heard three heavy knocks on his apartment door. When he opened it, two FBI agents flashed their badges. They told Potter he could either come outside and talk with them, or they would visit him at work.

Downstairs in the alley, the agents brought up a demonstration that Potter and his girlfriend, Kamber Sherrod, had participated in a month earlier. They had joined in an animal rights leafleting campaign in the high-class suburb of Lake Forest, dropping flyers on the doorsteps of houses around the home of an executive in an insurance company that covered an animal testing laboratory. Both were arrested, along with numerous others, and charged by the local police with misdemeanor disorderly conduct. The charges weren’t serious, but the agents warned Potter of other possible consequences if he didn’t cooperate with them.

“He told me I could help them by providing more information about the other defendants and other animal rights groups,” Potter told me in an interview in Washington. “I had two days to decide.” Potter has described in writing what happened next: “He gave me a scrap of paper with his phone number, written on it underneath his name, Chris. ‘If we don’t hear from you by the first trial date,’ he said, ‘I’ll put you on the domestic terrorist list.'”

Potter was stunned. “I felt as if I was staring blankly ahead,” he said, “but my eyes must have shown fear. ‘Now I have your attention, huh?,'” Chris said. The agent went on to tell him, “‘after 9/11, we have a lot more authority now to get things done and get down to business. We can make your life very difficult for you. You work at newspapers? I can make it so you never work at a newspaper again.'”

Potter left, and threw away the FBI’s number. The charges against him and the other demonstrators were dropped—but for years afterwards, small incidents recalled the FBI’s threats. When Kamber Sherrod went to the DMV in another state to renew her drivers’ license, “I was detained by several police officers as I was trying to leave the building, because, according to them, my name was ‘flagged’ in the system,” she told me. Before they finally let her go, they asked, “What happened in Chicago?” and “I overheard one cop mention a ‘t-list.'” When J. Johnson’s car broke down years later in Arkansas and a cop idly ran his license plates, “flashing letters burst forth in bold: ‘member of terrorist organization, animal rights extremists, approach with caution.” And Kim Berardi, also arrested along with Potter, was blocked from boarding a flight at the Seattle airport, handcuffed, and questioned by “two SEATAC security officers, two FBI agents, two Homeland Security operatives, and two officers from the federal Joint Terrorism Task Force.”

For Will Potter, the FBI’s visit marked the beginning of what would become a career as an independent journalist, tracking the government’s prosecutions—and persecutions—of environmental and animal rights activists, which one FBI deputy director, at the height of the war on terror in 2004, identified as “our highest domestic terrorism investigation priority.” Because of this campaign’s similarities to the anti-communist witch hunts of the 1940s and 1950s, Potter dubbed his blog on the subject, launched five years ago, “Green Is the New Red.”

Potter’s book, published last month and also titled Green Is the New Red, documents the scare tactics used by the government, often in concert with large corporations, against even patently non-violent activist groups, which they dub “animal rights extremists and eco-terrorists.” Prime targets were the Animal Liberation Front (ALF), Earth Liberation Front (ELF) and especially Stop Huntingdon Animal Cruelty (SHAC). Far from targeting only their clandestine operations (which focused on corporate property damage), the FBI “argued that terrorism laws must be radically expanded to include the above-ground campaigns of groups like SHAC,” Potter writes. In November 2006, George W. Bush signed into law the Animal Enterprise Terrorism Act.

Activists prosecuted under AETA have in several cases ended up in the “Communications Management Units” at two federal prisons. Created secretly during the Bush administration, these “experimental” units were supposedly designed to hold high-risk inmates, including terrorists, whose crimes warrant heightened monitoring of their external and internal communications. But the reality, as a current lawsuit by the Center for Constitutional Rights asserts, is that many prisoners end up in the CMUs “for their constitutionally protected religious beliefs, unpopular political views, or in retaliation for challenging poor treatment or other rights violations in the federal prison system.”

Even attempting to communicate with those in a Communications Management Unit can subject a person to surveillance and harassment, as Potter learned early this year when he received some documents from Public Intelligence, a Wikileaks-style organization. The documents included what appeared to be a running report to law enforcement officials around the nation from the federal Bureau of Prison’s Counter-Terrorism Unit, which monitors correspondence in and out of CMU’s. (Sample reports appear here and here).

On his blog, Potter wrote about the reports’ contents. Acknowledging that even “mundane” prisoner letters could include “coded threats,” Potter argues “that’s not what’s going on with the reports on environmentalists labeled ‘eco-terrorists.'” In these documents, “government officials make clear they are much more concerned about bad PR.” In one instance, “The Counter-Terrorism Unit notes an August 7, 2009 email received by Daniel McGowan, an Earth Liberation Front prisoner, regarding a possible vigil to raise awareness” about the CMUs. McGowan is part of the Center for Constitutional Rights’ lawsuit against the prison units. The report also describes an email to McGowan from CCR attorney Matthew Strugar, discussing efforts to raise awareness about the CMUs and challenge them. And here, Potter discovered his own name. According to the report:

Strugar described attending the animal rights conference in Los Angeles two weeks prior, in which an individual identified as Will spoke about inmate McGowan and his co-defendants’ cases, as well as the Communications Management Units (CMU). Will is believed to be Will Potter, an independent journalist based in Washington, DC…

In his email, Strugar wrote to McGowan: “Will was on four panels, I think, and talked a bit about you and your co-defendants’ cases and the situation with the CMUs. He’s a good advocate on that issue. There is still a lot of organizing and discussion about the Green Scare generally, which is good, and I talked a bit about green scare speech repression and the like. It was interesting.”

Potter writes that “It’s unsettling to see my name in documents produced by the Counter-Terrorism Unit. What’s even more disturbing, though, is the thought of scarce government resources being wasted on such reports…Lectures, public websites and First Amendment activity by journalists and attorneys should not be the purview of the Counter-Terrorism Unit. And even if you think that it should be, and even if you think I am some kind of potential terrorist, this “intelligence briefing” is absolutely useless. Any intern could have created the same report using Google.”

When I phoned the Bureau of Prisons media relations office to ask about this report, a spokeswoman said I would have to request the documents under the Freedom of Information Act. “I know what you mean,” she said, “but I can’t comment on it.”