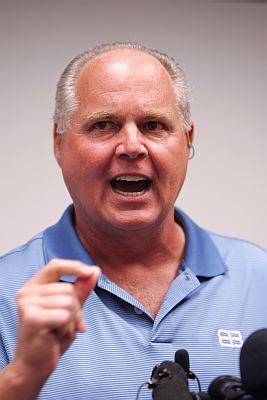 It was too good—nay, too impossible—to be true.

A number of media outlets today seized on comments made by Rush Limbaugh in which the king of conservative talk radio appeared to praise President Barack Obama for his leadership in the killing of Osama bin Laden in Pakistan on Sunday. “Rush Limbaugh: ‘Thank God for President Obama,'” read a headline at Politico, which went on to report that “Limbaugh credited the president with the strategy that led to the killing of Al Qaeda leader Osama bin Laden.” In a post titled “And Hell Freezes Over,” Andrew Sullivan at the Daily Beast noted Limbaugh’s “going out of his way to celebrate Obama’s singular role” in the bin Laden assassination. And the site Mediaite wrote that “Limbaugh opened his show today with huge praise for his President, his military, and his country. That’s right, folks. America can still get along.”

Well, not quite. At first listen, Limbaugh does in fact sound like he’s praising Obama for being the leader who “single-handedly came up with the technique in order to pull this off.” But then you remember: This is Rush Limbaugh, people. That’s not praise; it’s sarcasm at its very thickest. Here’s the video of Limbaugh’s remarks with an excerpt below it:

“You see, the military wanted to go in there and bomb as they always do. They wanted to drop missiles and drop bombs and a number of totally destructive techniques here. But President Obama, perhaps the only qualified member in the room to deal with this, insisted on the Special Forces. No one else thought of that. President Obama. Not a single intelligence adviser, not a single national security adviser, not a single military adviser came up with the idea of using SEAL Team 6 or any Special Forces.”

Limbaugh’s not lauding Obama’s role here. He’s mocking it. If you’re still not convinced, listen to Limbaugh’s reaction later in the day upon reading the reports citing his praise of the president, per Media Matters:

The guy can’t stop laughing. Even if hell had frozen over, Rush Limbaugh would still find a way to bash Obama for it.