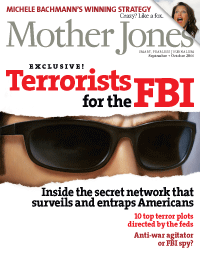 Maybe you’ve wondered, on occasion of a press conference announcing another major terrorism bust: Why does it seem as if the FBI’s undercover operatives actually encouraged—even thought up—the plot? Why do the targets come off as hapless losers unable to organize so much as a poker game? How come it was the government that provided the fake conspiracy, the fake car bomb or missile, even the fake Al Qaeda oath?

Trevor Aaronson wondered, too, and because he’s an investigative reporter, he decided to do something about it: look at every terrorism case the government has prosecuted since 9/11 and dig through the evidence and testimony. The result is the lead story in our new magazine cover package, “Terrorists for the FBI.”

Among the project’s conclusions:

In all, this investigation reviewed more than 500 domestic terror prosecutions (for more details, see our charts page and searchable database). How did we identify them? The federal government unwittingly helped with this research in a huge way: Attorney General Eric Holder in March 2010 testified before Congress as the Obama administration sought to put 9/11 mastermind Khalid Sheikh Mohammed on trial in Manhattan—a plan it ultimately abandoned. One of the documents submitted to Congress was a list of all successful terrorism prosecutions from 9/11 through 2009.

Aaronson took that document, then applied the DOJ’s criteria for defining terrorism cases to new federal prosecutions and brought the case list up to date as of summer 2011. Together with researcher Lauren Ellis, he went through court documents for every case—tens of thousands of pages. “We wanted an understanding of what happened in each case,” Aaronson says. “But we also wanted to ferret out patterns and connections between cases. This allowed us to identify some informants by name and then link multiple cases to specific informants. It also allowed us to see how sting operations have grown steadily, year after year, since 9/11.”

But documents never tell the full story—for that you need human beings. So Aaronson set out to interview the FBI agents behind the sting operations. Here he got a key assist from Lowell Bergman, the head of the Investigative Reporting Program at the University of California-Berkeley, where Aaronson was a fellow. Bergman, whose career as an investigative reporter includes as just one of its highlights being played by Al Pacino in The Insider, provided critical introductions to law-enforcement sources. “Through these interviews with FBI officials,” Aaronson says, “I came to understand what was happening behind the scenes in terrorism cases: how informants are recruited and used and how and why agents are pursuing these aggressive sting operations.”

In addition to Aaronson’s yearlong investigation, our FBI package includes a piece by Mother Jones news editor Nick Baumann that confirms, for the first time, that the federal government has been using foreign regimes to detain and interrogate Americans. And MoJo reporter Josh Harkinson looked at how the FBI’s aggressive anti-terror tactics play out among left-wing activists, profiling radical-turned-snitch Brandon Darby. To allow you to make up your own mind about these cases, we’ve also published the underlying data for the package: A searchable database of terror cases, numerous documents we discovered in our research, even an FBI surveillance video. Look at them for yourself and decide: Is having the government make up terror plots the price we pay for safety?