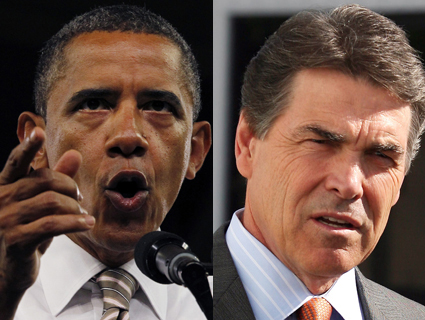 On Monday, the Department of Justice will file a legal brief explaining whether it believes Texas’ new Congressional map is legal under the Voting Rights Act (VRA), which outlaws discriminatory, racist voting practices that disenfranchise minorities. Back in June, Texas Republicans in the state legislature passed a map that creates four new House seats. Democrats promptly slammed the new lines, alleging that they don’t reflect the increase in the state’s Hispanic voting population by adding new majority-minority districts.

The map must to be ready to go at least 30 days before the November 12 filing deadline for next year’s primaries, leaving little time to wrangle over potential legal problems. The DOJ could either approve the new map, request more information about the disputed districts, or reject part or all of the map altogether, Roll Call‘s Shira Toeplitz reports.

The DOJ’s decision could serve as an early indicator of how tough Obama will fight for Hispanic votes. That’s not all: if the Obama administration decides to challenge the map, the resulting fight would pit the president against GOP frontrunner Gov. Rick Perry:

Obama stands to gain if the Justice Department battles the Texas map, staging a symbolic fight with his surging rival, Perry. Polls show the president’s standing with Hispanic voters continues to slip, and a strong effort in court will show that his administration is on their side.

“It sends Hispanic voters a message that this Justice Department is ready to fight to defend the Voting Rights Act — and not just Hispanic voters, but African-Americans voters,” [Democratic strategist Matt] Angle said.

Perry signed the map into law, so he benefits if courts pre-clear it without much hassle. Many Republicans see Perry as the party’s best shot to compete for Hispanic voters in 2012, and an easy trial reinforces that notion.

“He’s one of the candidates that truly understands the Hispanic community given that almost 40 percent of the state is Hispanic,” said Bettina Inclán, the former national executive director of the Republican National Hispanic Assembly. “They have a huge part of the state that is Latino, and he also has one of the largest borders with Mexico.”

In its brief, the DOJ will assess whether the change in the voting map would dilute the power of minority voters. If the new lines don’t pass muster, the stage is set for Obama and Democrats around the country to challenge GOP-driven disenfranchisement charges in other states.

UPDATE: The DOJ’s Civil Rights division ruled that it needs more information on the proposed redistricting plan for the state House and Congressional seats doesn’t comply with the VRA. Now it’s up to a special three-judge panel to make the final call. All sides are due in court in Washington on Wednesday for a hearing—so stay tuned.