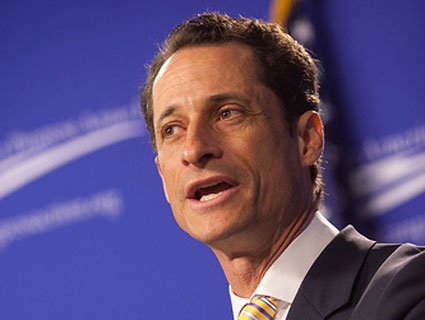 When prosecutors charged executives from the precious metals company Goldline with fraud on Tuesday, it marked an unusual victory for someone who hasn’t had many wins lately: former New York congressman Anthony Weiner.

Before he became infamous and ultimately resigned for tweeting photos of his private parts to women he met on the internet, Weiner had earned a reputation as a defender of consumer rights. Among his biggest campaigns was an effort to rein in sleazy gold dealers, from those who were taking advantage of the recession with dubious “cash for gold” deals to shady coin operations like Goldline, who, as Mother Jones reported last year, made millions by peddling their wares on the talk shows of right-wing hosts like Glenn Beck.

In May of last year, Weiner released a report highlighting many of the issues that ultimately ended up being part of the prosecutors’ charges Tuesday. His outspoken criticism of the company sparked a very public feud with Beck, who refused to distance himself from Goldline, which had been one of his most loyal sponsors. Beck asked his listeners to send in doctored photos of Weiner showing the congressman with “his nose as a wiener.” He said he welcomed any “Weiner facts” or photos of the congressman “in front of the wienermobile in front of his house, with his wiener dog, with his little wiener children.” Beck set up a website called weinerfacts.com just to post all the photos.

The day after Weiner resigned, Beck gloated about his nemesis’ downfall in a lengthy on-air rant, saying, “We’re going to have to do without, without one of the most unlikable figures in American political history. Remember, there is a guy who was capable of being completely unlikable. Even when he was arguing for healthcare, for 9/11 responders, he was unlikable…He could say anything, look and sound the exact same way. It didn’t matter if he was lying about Goldline or health care or his own wiener shots.”

And Beck continued to defend Goldline, claiming that his personal investment in the company was up 40 percent, even as Weiner’s stock had crashed. “At the exact same time [Weiner] was flexing naked in the congressional mirror and sending pictures to girls half his age, he was trying to destroy my business and the business of my clients with lies, half truths, and smears…I don’t feel bad for him. He did this to himself.”

Fast forward a year, and now Beck, like Weiner, has disappeared from the limelight after getting kicked off Fox News. And it looks like Beck’s favorite gold executives, some of whom regularly appeared on his show with him, could be facing some jail time for doing exactly what Weiner said they were doing.

It’s a bittersweet ending for Weiner, of course. He declined to comment, but Yuri Beckelman, a former staffer who worked on the Goldline investigation and wrote the report for Weiner, says that he’s not surprised to see the charges filed against Goldline. “It’s a business model built on a scam,” he explains. “Those defending them or hawking their products on the radio or television are complicit. Someone jokingly suggested to me that if they’re taking investment advice from Glenn Beck it’s their own fault. I couldn’t disagree more. This is about ordinary Americans having their life savings devastated by con men who haven’t let up just because we’re in a recession.”