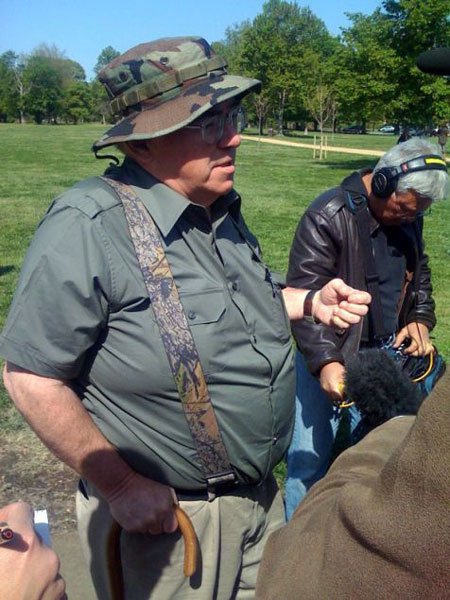 It’s not unusual for people cooking up a terrorist plot to take their inspiration from a novel. Timothy McVeigh was reportedly inspired to blow up the Oklahoma City federal building by the book The Turner Diaries. The Georgia seniors meeting at Waffle House who were recently apprehended by the FBI for allegedly plotting to kill millions of Americans to save the Constitution also seem to have had a literary influence: Mike Vanderboegh, and his novel, Absolved.

Vanderboegh is a longtime militia activist, often associated with the Oath Keepers (thought he says he’s not a member), and he’s been active in the Minutemen group that “patrols” the US border to keep illegal immigrants out of the country. His book is about small groups of underground miliita groups who plot to assassinate key law enforcement and judicial officials as a way of fighting back against gun control and gay marriage. Vanderboegh has called it “a combination field manual, technical manual and call to arms for my beloved gunnies of the armed citizenry.”

I wasn’t too surprised to see Vanderboegh’s name pop up in the Georgia case. That’s because I saw him in action last year when he spoke at an “open carry” gun rally in Ft. Hunt, Virginia, where a handful of gun nuts and Oath Keeper-types had assembled as close as they could to the District line with a loaded weapon to press for looser gun laws.

Vanderbough claimed to be just “a fat, old scribbler with congestive heart failure and diabetic feet.” But he gave a fiery speech at the event that was an invitation to violence. Vanderboegh proclaimed that he was trying to “get the attention of people who are pushing the country towards civil war and that they should back off before someone gets hurt.” He led the crowd in cheers of “Oh HELL no!” and warned that “there are going to be consequences for pushing people like us back.”

At the time, Vanderboegh was reveling in a spate of media attention he’d gotten thanks to his online calls for followers to throw bricks through the windows of congressional Democrats for passing health care reform. On his blog, the Sipsey Street Irregulars, he had written:

Vanderboegh expressed surprise when some people actually took him seriously and did throw bricks through the windows of congressional offices. But he wasn’t sorry. He told the Washington Post that there were a lot of Americans who “are not only willing to resist this law to the very end of their lives, but are armed and are capable of making such resistance possible and perhaps even initiating a civil war.”

Today again, though, he seems a bit shocked to hear that his book, which isn’t even published except for a few chapters online, may have inspired some old people in Georgia to allegedly plot a bioterror attack. He has written some angry blog posts arguing that his book is in no way connected to the Waffle House Four:

Absolved is fiction. I hope it is a “useful dire warning.” However, I am as much to blame for the Georgia Geriatric Terrorist Gang as Tom Clancy is for Nine Eleven.

Vanderboegh, though, seems to be enjoying the attention. He kindly linked to the Mother Jones story on the Georgia indictments in a roundup of all of his media coverage. He’s even posted some stock quotes for lazy journalists seeking comment. Here’s a good one:

I congratulate the FBI on their ability to sniff out and entrap old, feeble minded Georgia morons with dreams of terrorist grandeur. Now if they could just apply some of that industry to telling us the truth about the murder of Border Patrol Agent Brian Terry, we’ll all be better off.