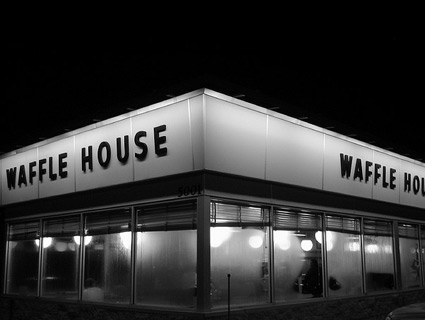 Four senior citizens walk into a Waffle House planning to go on a killing spree in order to “save the Constitution.”

That’s not the beginning of a joke, it’s the scenario outlined by the FBI in a criminal complaint filed against four Georgia men yesterday who allegedly sought to use the online novel of a frequent Fox News guest named Mike Vanderboegh as a model for a terrorist plot against US government officials. The four men, Samuel Crump, Frederick Roberts, Ray Adams, and Dan Roberts, who named themselves “the covert group” (subtle!) allegedly fantasized about dispersing the toxic agent ricin over Washington DC and Atlanta, and hoped to ultimately obtain botulinium toxin, which Adams believed could kill millions of people in small doses.

“We need somebody to back us with some damn money so we can make that other shit,” Crump said at a Waffle House in Toccoa, Georgia. according to the criminal complaint. Crump added that botulinium toxin was “worse than anthrax.”

What was the ostensible purpose of all this killing? Saving the country of course. “There is no way for us, as militiamen, to save this country, to save Georgia, without doing something that’s highly, highly illegal: murder,” Thomas reportedly said. “When it comes time to saving the Constitution, that means some people have got to die.” The FBI also alleges that “Thomas, Roberts and others discussed the need to obtain unregistered silencers and explosive devices for use in attacks against federal government buildings and employees, as well as against local police.”

So how much more operational was this plot than your average FBI sting involving some hapless al-Qaeda fanboy? That’s not really clear. While the group demonstrated an ability to independently manufacture ricin, which is made from widely available castor beans, the criminal complaint begins with a meeting surveilled by an FBI “confidential human source” in March. While the FBI recordings showing the four men expressing an eagerness to kill large numbers of people in pursuit of their political goals will likely preclude any entrapment defense, there’s no way to know from the criminal complaint what level of involvement the FBI’s confidential human source had in putting together the whole plan, or even the existence of the group itself, or whether the source came upon the plot by other means.

Bottom line: At first glance this appears to be the right-wing extremist version of the sort of al-Qaeda wannabe stings we’ve become so familiar with.