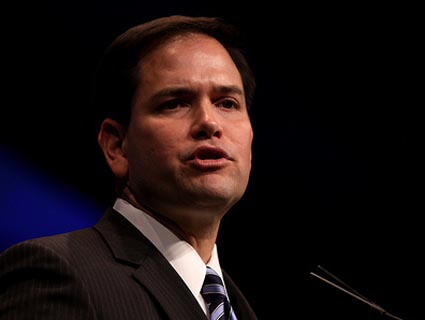 After non-white Americans voted overwhelmingly for Democrats in the 2012 election, prominent conservative pundits like Sean Hannity and Charles Krauthammer began signalling a willingness to shift on immigration reform. At the time, Republicans were still sitting shiva for Mitt Romney’s campaign, so it’s possible all the talk of compromise was just post-election despair. But the right wing media’s reaction to Florida GOP Sen. Marco Rubio’s new immigration proposal—a plan that resembles the one put forth by the White House—suggests conservatives may really be changing their tune on immigration reform.

As Rubio elaborated on his pitch for immigration reform, which would include a pathway to citizenship for unauthorized immigrants already in the US, to Fox News’ Bill O’Reilly Wednesday, O’Reilly listened and said “that seems pretty fair.” Likewise, when Rubio showed up on Laura Ingraham’s show Wednesday, Ingraham sought to put distance between Rubio and the White House saying, that “Obama’s going to seek citizenship in one fast push,” whereas Rubio’s plan would be more “piecemeal.” (Ingraham’s wrong: How long any undocumented immigrant would have to wait for citizenship under either plan actually remains undetermined.) Meanwhile, Rubio, in both instances, said he didn’t really know where the White House stood on the issue. Rubio also appeared on Sean Hannity’s radio show Thursday, and Hannity called Rubio’s immigration plan “the most thoughtful bill I have heard heretofore.”

Here’s why this is important: When George W. Bush sought to pass immigration reform, his plan was killed by the GOP base, who had been whipped up by conservative media and talk radio. Hannity himself was key to the effort. With some exceptions, conservative media seems more inclined to cover for Rubio this time around. That could all change pretty quickly, but given how much influence Fox News and talk radio have on the conservative base (remember when they convinced Republicans Mitt Romney was on the verge of a landslide victory?), how the right-wing media approach this issue could determine whether immigration reform actually has a chance of passing. For the moment, conservative pundits are playing up a distance between Rubio’s proposal and the Democrats that doesn’t really exist. That could make a potential compromise seem more palatable to the Republican base. “Why do I think regardless of what you propose that would solve the problem Democrats are going to demagogue it?” Hannity asked Rubio Thursday. “Well, that may be the case,” Rubio replied solemnly.

Immigration reform advocates have noticed—and are elated by—conservative media’s new tone on immigration. “It shows the power of the messenger,” says Frank Sharry, who runs the pro-immigration reform group America’s Voice. “It’s going to be hard for the right-wing echo chamber to get whipped up the way they did in 2007.”

Contra Hannity, Democrats have already signalled they’re willing to work with Rubio. “I expect that the Judiciary Committee will devote most of our time this Spring working to pass comprehensive immigration reform,” Senator Patrick Leahy (D-Vt) said during an appearance at the Georgetown University Law Center Wednesday. “I have a lot of respect for Marco Rubio,” Leahy added. “We disagree on some things, but we agree on others, but I found him to be very open in his views and I’ll seek that.”

Rubio told Ingraham yesterday that “I’ll work with anybody” on immigration reform. That claim will be tested in the next few months.