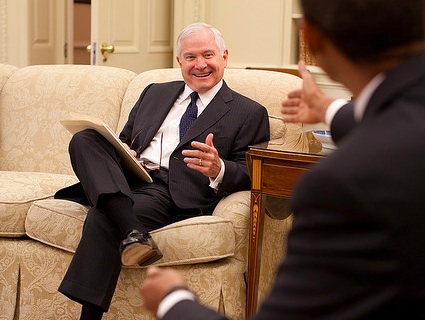 Two former top Obama administration officials have added their voices to those calling for some form of judicial oversight over the use of targeted killing.

In the New York Times, former Obama acting solicitor general Neal Katyal suggests that a panel of national security staffers could form “a ‘national security court’ housed within the executive branch itself” that would evaluate targeting decisions, which “would later be given to the Congressional intelligence committees for review.”

Among Katyal’s key points is that the Foreign Intelligence Surveillance Court, the secret court that approves surveillance on suspected foreign agents, often cited as a model for a potential targeted killing court, rarely refuses the government’s requests. “[T]he odds of getting a request rejected, around 1 in 3,000, approximately the same as those of being struck by lightning in one’s lifetime,” Katyal writes. That of course, hasn’t stopped presidents from doing end-runs around it.

Katyal isn’t the only Obama official warming to the idea of a targeted killing court. Former Obama defense secretary Robert Gates said during a February 10 interview on CNN (flagged by Jack Goldsmith at Lawfare) that he believes more oversight of the killing of Americans may be warranted. “A panel of three judges or one judge or some—something that would give the American people confidence that there was, in fact, a compelling case to be—to launch an attack against an American citizen…is something worth giving serious consideration to,” Gates told CNN.

Americans, however, make up a tiny percentage of the targeted killing program’s targets. Senator Lindsey Graham (R-S.C.) reportedly told an audience in his home state Wednesday that the number of casualties from drone strikes was 4,700, far higher than previous estimates collected by the Council on Foreign Relations Micah Zenko, which pegged drone casualties at around 3,500. Of those thousands of casualties, just four are confirmed to be Americans: Terror suspects Kamal Derwish, Samir Khan, and Anwar al-Awlaki, as well as al-Awlaki’s teenage son Abdulrahman, who was never accused of a crime. If some kind of adversarial panel, internal to the executive branch or otherwise, were only to evaluate whether Americans should be placed on the kill list, it wouldn’t be very busy.

The American Civil Liberties Union, for its part, hates the secret court idea, which the ACLU argues may be “intended to limit the executive branch’s claimed killing authority, but threatens instead to legitimize it.”