Authorities have identified the deceased suspect in the bombing of the Boston marathon, which killed three and injured more than 170, as Tamerlan Tsarnaev. A user by that name has posted a video to his YouTube playlist extolling an extremist religious prophecy associated with Al Qaeda. It is not clear yet whether the user is the same Tsarnaev as the deceased suspect. 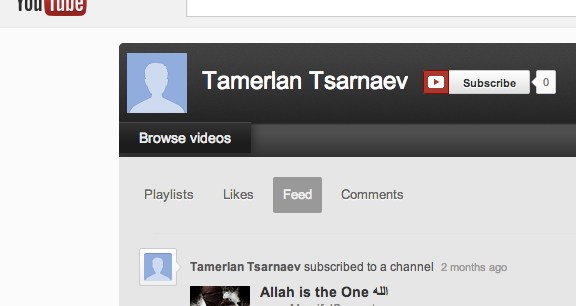 The YouTube page includes religious videos, including one of Feiz Mohammad, a fundamentalist Australian Muslim preacher who rails against the evils of Harry Potter. One playlist includes a video dedicated to the prophecy of the Black Banners of Khurasan, which is embraced by Islamic extremists—particularly Al Qaeda. The prophecy states that an invincible army will come from the region of Khurasan in central Asia.

“This is a major hadith (reported saying of the prophet Muhammad) that jihadis use; it is essentially an end-time prophecy,” says Aaron Zelin, a fellow at the Washington Institute for Near East Policy. “This is definitely important in Al Qaeda’s ideology.” In The Black Banners, the book by former FBI agent Ali Soufan that is named after this prophecy, Soufan describes it this way:

Khurasan is a term for a historical region spanning northeastern and eastern Iran and parts of Turkmenistan, Uzbekistan, Tajikistan, Afghanistan, and northwestern Pakistan. Because of the hadith, jihadists believe that this is the region from which they will inflict a major defeat against their enemies—in the Islamic version of Armageddon.

The videos were posted on a playlist called “Islam” four months ago under the username “muazseyfullah.” According to Zelin, “Mu’az is usually a name,” and “Sayf Allah means sword of God.” Here is the video:

According to Soufan’s book, “It’s not a coincidence that bin Laden made al-Qaeda’s flag black; he also regularly cited the hadith and referenced Khurasan when recruiting, motivating, and fund-raising.” Soufan adds that Al Qaeda operatives he interrogated were often convinced that by joining the extremist group they were fulfilling the prophecy. Soufan states that the origin of the “black banners” hadith—and whether the prophet Muhammad ever said it—is questionable. 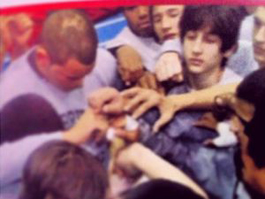 This YouTube page also contains other indications of an interest in Islamic fundamentalism and jihadism. Its owner subscribed two months ago to a channel called “Allah is the One.” In recent months, he liked a video described as a telephone conversation with a famous sheikh that covers “collaboration” with the Sufis of Chechnya. Five months ago, he added two videos to his playlist under the heading “Terrorists.” But each video has been deleted with the message: “This video is no longer available because the YouTube account associated with this video has been terminated.”

In a comment posted two months ago regarding another video, the user assails a Muslim for not being a pure adherent of the faith:

You are not a grand Michael but the same Misha that you were before Islam. You accepted Shiism not because it convinces you, but because of the fears, and interests (about which Allah knows) which you’ve followed. Just like you entered into Islam, so to you flew out of it. You betrayed yourself, Misha. Well anyways…farewell.

Update: This post has been updated to clarify that the YouTube user’s identity is not confirmed. The video “Who wants to be a militiaman?” Also appears to be a music video that expresses opposition to the actions of Vladimir Putin’s government in Russia. The title is a play on the American game show “who wants to be a millionaire” and a word for “policeman” in Russian.