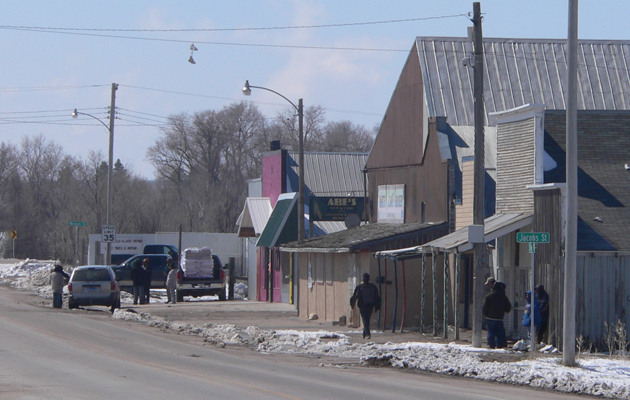 White Clay, Neb. sells more beer per capita than any town in America. <a href="http://en.wikipedia.org/wiki/File:Whiteclay,_Nebraska_from_N_2.JPG">Ammodramus</a>/Wikimedia Commons

Update, August 14, 2013: Although an initial vote-count gave repeal supporters a slim 151-vote victory, the referendum is still officially too close to call because 438 votes have been challenged.

Whiteclay, Nebraska, sells more beer per capita than any town in America. In 2009, the most recent year for which we have statistics, the four liquor stores in the town of about a dozen full-time residents sold 4.6 million cans of beer. Or roughly 383,333 cans per person. Or 1,009 cans of beer per resident, per day. But the beer isn’t being consumed by the residents of Whiteclay. The town’s economy is built on the flow of booze two miles across the South Dakota border into the Oglala Sioux Pine Ridge reservation, where the sale and possession of alcohol has been illegal for more than a century. On Tuesday, the residents of Pine Ridge will hold a referendum on whether to put Whiteclay out of business.

Activists in Pine Ridge and their allies have tried for years to shut down Whiteclay. For the most part, those efforts have focused on the creation of a dry buffer zone that would extend across into Nebraska (the reservation ends at the state line). Congress had mandated the 50-mile buffer upon creation of the reservation in 1889, but in 1904, the liquor lobby successfully persuaded President Theodore Roosevelt to eliminate that buffer by executive order (which may have not been legal). Lawmakers could have extended the buffer on their own but chose not to, and despite repeated requests, no administration in Washington has been willing to consider reversing Roosevelt’s order.

Tuesday’s vote would lift the prohibition on beer sales in Pine Ridge entirely (hard liquor would still be prohibited), and put the tribe in charge of sales, the profits from which it could invest in things like alcoholism treatment centers. The theory is pretty straightforward, and consistent with the idea behind repealing prohibition everywhere else: The current legal structure has only served to enrich distributors in Whiteclay while doing nothing to curb addiction. With 8 out of 10 households on the reservation (which has a population of somewhere between 18,000 and 40,000) impacted by alcoholism, it’s hard to imagine legalization making things much worse.

Or maybe it’s not. The success of the measure is no sure thing, with a number of powerful opponents, such as tribe president Bryan Brewer, opposing legalization on the grounds that it would bring the worst of Whiteclay to the community’s doorstep. If the referendum passes, one opponent told the Rapid City Journal, “we would have a Whiteclay in every district in this reservation.”