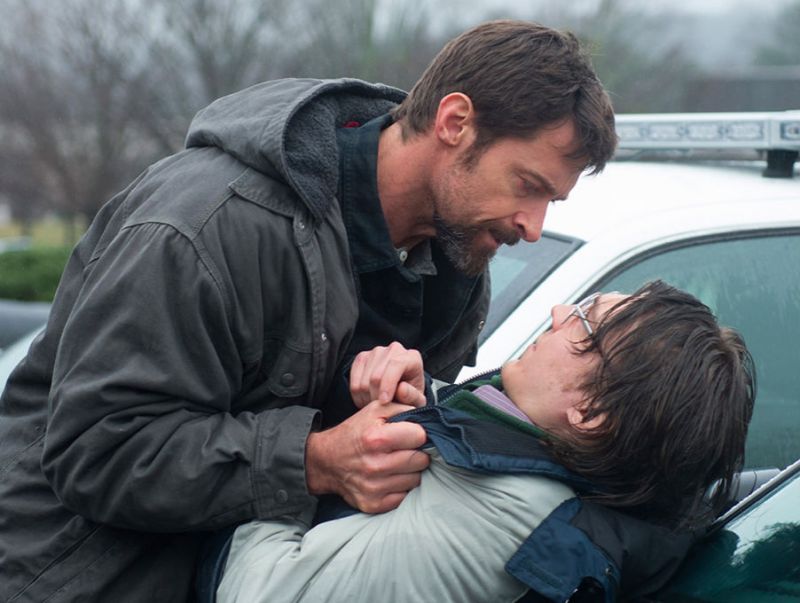 Prisoners is one of the year’s finest films. It’s a riveting and superbly acted two-and-a-half hours, carefully and smartly crafted by director Denis Villeneuve and screenwriter Aaron Guzikowski.

The film focuses on the Thanksgiving kidnapping of two daughters, one from the Dover family and one from the Birches. Hugh Jackman commands the screen as Keller Dover, a father who abducts and terrorizes Alex Jones (played by Paul Dano), a mentally impaired young man who Keller is convinced took the girls and knows where they’re being held. The police investigation is led by the ultra-dedicated Detective Loki (Jake Gyllenhaal). The movie scores high marks as a gripping mystery, and as a terrifying human drama. It’s also the best argument against torture that has emerged from the film industry in a long time.

Last year, a lengthy debate began regarding Zero Dark Thirty‘s depiction of the United States’ use of torture during the Bush administration. Some anti-torture commentators were rather generous. “It is an exposure of torture,” Andrew Sullivan wrote. “It removes any doubt that war criminals ran this country for seven years and remain at large, while they scapegoated the grunts at Abu Ghraib who were, yes, merely following their superior’s own orders.” This point, made by Sullivan and many others at the time, is (to put it politely) excessively generous, given that ZDT offers a severe mangling of recent history that gives the viewer the impression that torture was crucial in tracking down Osama bin Laden. (It simply wasn’t.) With Prisoners, however, there is no hedging on the matter. The film has nothing to do with politics or the abuses of the War on Terror, but it does depict the prolonged, illegal, and sloppy interrogation of someone for vital information.

Very quickly, Keller (Jackman) looks more like a villain than a determined and sympathetic family man. Alex’s face is swollen and bloodied beyond recognition. Shards of glass protrude from his flesh. He’s been drenched in streams of scalding water. There are serious doubts about whether Alex had anything to do with the abduction, and Keller’s “hurt him until he talks” policy grows increasingly unsuccessful and problematic.

It is an ugly, frightening, and self-defeating act that is committed out of love and desperation. And it’s a punishing depiction handled responsibly and masterfully by Villeneuve, and his cast and crew. It addresses a question we’ve heard many times before. For instance, in a 2006 episode of HBO’s Real Time with Bill Maher, the panel discussed the issue of Bush-era torture and “enhanced interrogation.” Actor Jason Alexander stated that if a prisoner had information on the location of his kidnapped child, he would without hesitation go “Quentin Tarantino” on him. That seems like something many parents would say, and it’s not hard to understand why. But Prisoners intelligently explores the failings of that logic. What if you have the wrong person? Is this undermining effective police work? What do you lose of yourself if you go down this road? Prisoners strips any hint of heroism or romanticism from the notion of doing “whatever it takes” to save your family. Take that, Jack Bauer.

Here’s a trailer for the powerful film:

Prisoners gets a release on Friday, September 20. The film is rated R for disturbing violent content including torture, and language throughout. Click here for local showtimes and tickets.