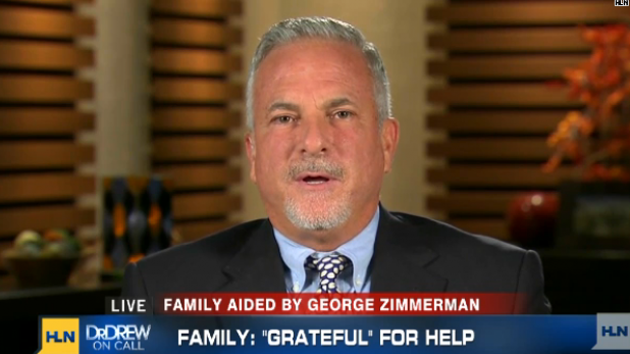 During George Zimmerman’s trial for the alleged murder of Trayvon Martin, the media relied mostly on one man for pro-Zimmerman commentary: his friend and fellow neighborhood watch volunteer, Frank Taaffe. It has since come to light that Taaffe is an ex-con and fervent white supremacist who believes that whites and blacks have no business mingling and claims that “the only time a black life is validated is when a white person kills them.” He also hosts a white-power podcast. On one episode last fall he argued that all women who married black men would probably meet the same fate as Nicole Brown Simpson. (“I always say, you lie down with dogs you’re going to get fleas—especially if they’re black dogs.”)

Nevertheless, the cable news networks have continued to give Taaffe airtime. Most recently, CNN’s sister network, HLN, has been tapping him for commentary on the case of Michael Dunn, who, like Zimmerman, stands accused of murdering a black teenager in Florida. In the last few days, Taaffe has appeared on HLN at least six times, and he says on his Facebook page that he’s slated to make nightly appearances on two HLN shows, Nancy Grace and Dr. Crew on Call, for the remainder of the week.

Taaffe’s task is defending Dunn, who shot 17-year-old Jordan Davis outside of a Jacksonville gas station after arguing with the teen and his friends over loud music. Dunn claims he saw Davis holding what looked like a shotgun and that he fired at the boys in self-defense, but witnesses maintain that Davis was unarmed. On air, Taaffe has argued that the killing was justified, even if Davis wasn’t pointing a firearm, because young black men are prone to violence. Here’s a snippet from his exchange with an African American guest on Dr. Drew on Call last week:

You talk about the white man being the devil—well, here’s a fact…According to the FBI, and the US Department of Justice, African Americans make up 12 percent of the population, yet they commit the most disproportionate amount of violent crimes. Over 60 percent of the murders were convicted by African Americans. And 32 percent were under the age of 18. So, when Michael Dunn pulled into that gas station, you know, you wonder why we have these premonitions…

In other media appearances, Taaffe has stressed that the driver of the car in which Davis was killed had a criminal record. And he has argued that that teen’s death had less to do with racism than with a lack of education in the black community. As he told Dr. Drew on Monday:

You know white racism is not America’s biggest problem. I feel the biggest problem is education…There’s a distinct gap between the graduation rate of African Americans versus white or Latinos in the country…And this was simply a matter of loud music, a man asking them to turn it down and they did not oblige and then it escalated.

He added that Davis was clearly “the provoker” in this situation.

Taaffe deployed similar tactics during Zimmerman’s trial. He played up blacks’ supposed criminality, for example, and seized on peripheral details to paint Martin as a hoodlum. As Mother Jones has noted, these arguments are more than a little ironic, given his own history. According to the Florida Department of Law Enforcement and the Orange County, Florida, Clerk of Courts, Taaffe has been arrested or faced criminal charges at least a dozen times, including for drunk driving, stalking, domestic violence, and child abuse. In 2000, he pleaded guilty to trespassing after swiping papers from his ex-wife’s home, and was sentenced to nine months in jail. HLN and the other networks that feature him make no mention of his criminal record or white-separatist ties. Perhaps during Zimmerman’s trial they felt his perspective as the accused’s friend and neighbor deserved a hearing, regardless of his shortcomings. But what qualifies Taaffe to comment on the Dunn case—except his own lengthy rap sheet?