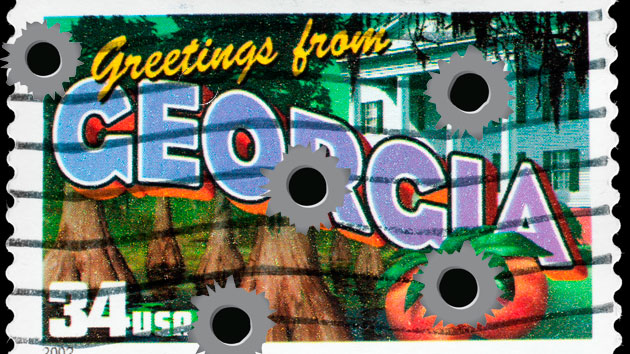 Update April 24, 2014 5:40 p.m. EDT: Georgia Gov. Nathan Deal signed HB 60 into law on Wednesday. “Our nation’s founders put the right to bear arms on par with freedom of speech and freedom of religion,” Deal said in a statement. “Georgians cherish their Second Amendment rights, and this law embodies those values.” The new regulations—which allow guns to be carried in airports, bars, and K-12 schools, and expand Stand Your Ground protections—will take effect on July 1.

Update March 21, 2014 4:15 p.m. EDT: Last night, in the final minutes of its annual legislative session, the Georgia House passed a bill with the “guns everywhere” bill attached; HB 60 now goes to Gov. Nathan Deal’s desk for a signature. The state Senate had sent the bill back to the House with a few minor amendments earlier in the week; Among the tweaks was a provision allowing religious leaders to decide whether guns may be carried in their houses of worship; the fine for not respecting those wishes can be no more than $100. Another change permits the use of silencers while hunting on some public land and on private property if the owners approve.

Otherwise, the final bill was largely the same as the one previously passed by the House. A copy of the final bill is not yet available, but according to the list of Senate amendments, changes were not made to sections providing for the expansion of Stand Your Ground. Opponents of the bill say the SYG provisions would allow convicted felons or others using guns illegally to claim a Stand Your Ground defense.

If Gov. Deal signs the bill, it will go into effect on July 1. “We expect Governor Deal to sign the bill as he has always stated that he will sign any pro 2A [2nd Amendment] bill that reaches his desk,” the pro-gun group Georgia Carry stated on its website this morning. Deal has an A rating from the National Rifle Association.

Soon gun owners in the state of Georgia may be allowed to pack heat almost anywhere—including K-12 schools, bars, churches, government buildings, and airports. The “Safe Carry Protection Act” (HB 875) would also expand Georgia’s Stand Your Ground statute, the controversial law made famous by the Trayvon Martin killing, which allows armed citizens to defend themselves with deadly force if they believe they are faced with serious physical harm.

The bill could pass as soon as next week, before the current legislative session ends March 20. It is the latest effort in the battle over gun laws that continues to rage in statehouses around the country. It is perhaps also the most extreme yet. “Of all the bills pending right now in state legislatures, this is the most sweeping and most dangerous,” Laura Cutiletta, a staff attorney with the Law Center to Prevent Gun Violence, told PolitiFact. Americans for Responsible Solutions, the gun reform advocacy group founded by former congresswoman Gabby Giffords after she was shot in the head, has deemed it the “guns everywhere” bill. For its part, the National Rifle Association recently called HB 875 “the most comprehensive pro-gun reform legislation introduced in recent state history.”

In addition to overturning current state laws and dramatically rolling back concealed-carry restrictions, HB 875 would loosen other gun regulations in the state. The law would:

The sweeping bill would also expand the state’s Stand your Ground law into an “absolute” defense for the use of deadly force in self-protection. “Defense of self or others,” the bills reads “shall be an absolute defense to any violation under this part.” In its current wording, the bill would even allow individuals who possess a gun illegally—convicted felons, for example—to still claim a Stand Your Ground defense.

The Stand Your Ground provision has drawn some notable opposition: Lucia McBath, a resident of Marietta, Georgia, and the mother of Jordan Davis, the 17-year-old victim in another high-profile Stand Your Ground case, spoke out against the bill at a Senate hearing Wednesday. She also published an op-ed in the Savannah Morning News to express her opposition to the gun bill.

“I believe Florida’s Stand Your Ground law, and the aggressive culture it fosters, is the reason my son is not here today,” she wrote, regarding her son’s death in Jacksonville in 2012. “Our legislature is looking to expand this dangerous law even further. Legislation here in Georgia, HB 875, would extend our state’s Stand Your Ground law to protect felons who kill using illegal guns…The last thing our families need is for criminals to be shielded by this law.”

The legislation passed the House overwhelmingly in February and moved to the state Senate, where it went into committee. But in a strategic move on Tuesday, House Republicans revised the bill and then tacked it onto a separate piece of legislation, HB 60, which would allow some judges to carry guns. The move accomplished two things: First, it allowed the bill to bypass committee and go to the Senate floor for an immediate vote because HB 60 had already been approved by both the House and Senate. Second, the revision did away with a provision that would have decriminalized carrying guns on college campuses—the bill’s supporters knew that the Senate had struck down a similar legislative effort at the end of last year’s session due to a campus carry statute.

“If the Senators were hiding behind campus carry, they can’t hide behind campus carry now,” Rep. Alan Powell, one of the bill’s sponsors, told Atlanta’s WSB radio. Meanwhile, Georgia Gov. Nathan Deal has a robust record of supporting pro-gun policies, and an “A” rating from the NRA.

The Georgia bill is one of several recent efforts to push for laxer concealed-carry laws. A bill now moving through Indiana’s Legislature would allow guns to be kept locked inside cars on school property, while a South Carolina bill that passed last month allows concealed carry in bars and restaurants.*

For more, see our special reports: Newtown: One Year After and America Under the Gun: The Rise of Mass Shootings.

Correction: An earlier version of this article said that the South Carolina concealed carry bill did not pass.