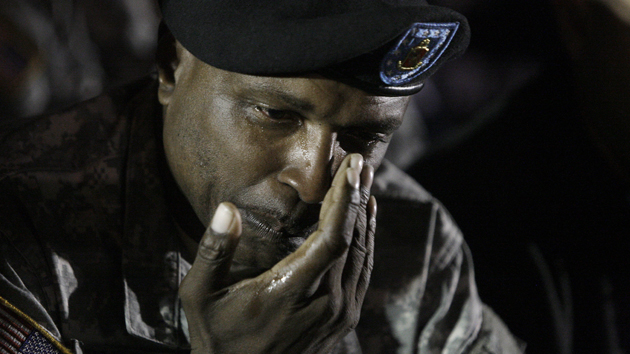 A soldier wipes tears from his eyes during a vigil at Fort Hood, Texas in November 2009. AP Photo/LM Otero

Another member of Congress has joined the chorus of officials calling on the Pentagon to give victims of the 2009 Fort Hood shooting the same benefits as soldiers killed or wounded in combat.

In a recent letter to Secretary of Defense Chuck Hagel that cited our reporting, Rep. Patrick Meehan (R-Pa.) detailed the “Orwellian” situation survivors and families of the dead face because of how the incident has been labeled:

Major Nidal Hasan admitted he was the attacker. He is an avowed Jihadist who since 2008 had communicated more than a dozen times with al Qaeda-linked cleric Anwar al-Awlaki….And yet, the Department of Defense has classified the incident as “workplace violence,” depriving the survivors and families of the fallen of medical and disability benefits and combat-related pay. This Orwellian designation also makes them ineligible for the Purple Hearts.

Beyond this unfairness, a recent article in Mother Jones magazine outlined how shabbily the injured were being treated by their own government. One Army reservist who was shot in the head and back was discharged rather than placed in a Warrior Transition Unit, as is commonplace for reservists wounded overseas. She lost her military health insurance. Only after the kindness of strangers was she able to seek treatment at the Mayo Clinic, where the doctors found multiple bullet fragments in her skull that had gone unnoticed and led to crippling headaches. Another survivor, a 22-year Army veteran who was shot seven times in the attack, was turned away from an Army post-traumatic stress clinic in Texas because his wounds were not combat-related. He was eventually able to seek treatment at a Navy clinic in California at his own cost rather than the Army’s. There are other stories that can only be described as shameful.

As a former prosecutor, I can appreciate the Department’s concern that designating the shooting an act of terrorism and the subsequent injuries as combat-related could prejudice the case against Hasan. But the court martial is over, and Hasan sits on death row. The appeals process is likely to last years. Meanwhile, the killed and wounded in this attack are being denied the benefits and honors they have earned.

Other lawmakers have made similar pleas. In May 2013, Reps. Chaka Fattah (D-Pa.), Frank Wolf (R-Va.), and Thomas Rooney (R-Fla.) sent Hagel a letter calling the government’s decision to classify the shooting as workplace violence an “irresponsible, indefensible breach of our nation’s sacred pledge to our service members.” The lawmakers urged the Pentagon to “swiftly reclassify the victims’ deaths and injuries as ‘combat-related.'” 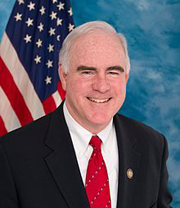 Rep. John Carter (R-Texas), whose district includes part of Fort Hood, has been trying for nearly five years to push through legislation that would make Hasan’s victims eligible for the same benefits and honors as soldiers killed or wounded in combat, including Purple Hearts. The measure has garnered broad support, with more than 220 co-sponsors, and a variation was included in the defense-spending bill that passed the House last year. But it was stripped out of the Senate version after the White House and the Army voiced opposition.

Since Hasan’s conviction on murder charges last August, Carter, who chairs the House Homeland Security Subcommittee on Appropriations, has redoubled his efforts. “I support Representative Meehan’s letter to Secretary Chuck Hagel and hope that President Obama, Secretary Hagel and the DoD will finally recognize the shooting for what it is—an act of terror,” he told Mother Jones. “The fight for the victims of the Fort Hood shooting will not be over until it is won.”

In an email, Army spokeswoman Lt. Col. Alayne P. Conway defended the decision not to label the incident terrorism saying, “There has been no evidence or information indicating that Nidal Hasan was a member of an international terrorist organization or that his attack was directed by such an organization.” Conway added that, in late 2013, after several inquiries from members of Congress, the Army “agreed to review the record of Nidal Hasan’s court-martial and determine whether it provides any additional or new evidence that would establish a sufficient nexus between Hasan and an international terrorist organization.” But the Army judge who oversaw the proceedings refused to admit information relating to Hasan’s Jihadist ties—including dozens of emails between the Army psychiatrist and Anwar al-Awlaki, a radical cleric with Al Qaeda ties. So there’s virtually no chance of the review finding that the deadly rampage was an act of terrorism, and victims will continue struggling to get the benefits Meehan and other lawmakers feel they deserve.