The current issue of the National Rifle Association’s American Warrior magazine just hit, and in it, the gun lobby comes out squarely in favor of warrior cops. An article titled, “If You Were a Cop, What Would You Drive?” opens with a photo of an armored personnel carrier-style vehicle juxtaposed with a Volkswagen van. Rick Stewart, the host of the NRA’s Life of Duty Patriot Profile series, wonders, “Why should SWAT teams be forced to deploy in a glorified bread-truck?” (It is unclear why a hippie bus is the other alternative.) 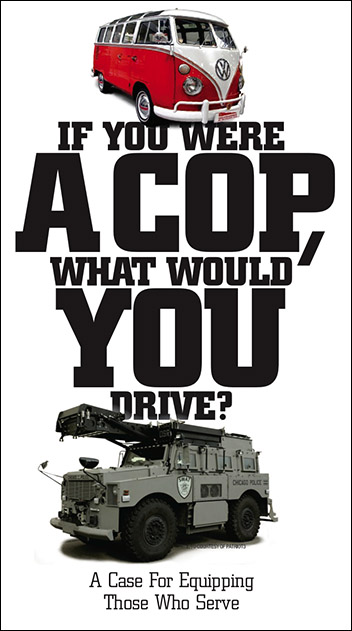 The NRA has long walked a delicate line between glorifying law enforcement and fanning fears of big, tyrannical government. In 1995, NRA executive vice president Wayne LaPierre infamously wrote of “jack-booted government thugs” and “federal agents wearing Nazi bucket helmets and black storm trooper uniforms,” and he still routinely warns of imminent crackdowns on gun owners. As Stewart coyly acknowledges, “For many there is a certain Orwellian level of mistrust in government and law enforcement.”

Yet the NRA is also a trade lobby for firearms manufacturers, which may explain its soft stance on the militarization of American police. As I detail in the current issue of Mother Jones, a multibillion dollar industry has sprung up to provide ever-bigger weapons and military-style equipment to law enforcement. Since 2002, the Department of Homeland Security has given local police departments $41 billion to buy new gear.

This puts the NRA in a tricky position. Ever since the Ferguson protests, people from  all political persuasions have become wary of efforts like the Pentagon’s 1033 program, which has transferred $5.1 billion worth of equipment to local law enforcement. Stewart’s article makes the NRA’s position on 1033 clear: “The program is not evil; it is responsible.” He also defends the police’s use of camouflaged battle dress “for tactical advantage,” especially for those who “serve on the frontline of illegal activity along our southern border.” It is “unconscionable,” he maintains, to make cops wear their “everyday duty uniforms” in “extremely dangerous situations”—such as protests.

The American Warrior article depicts police as victims: “Nobody seems more ‘targeted’ these days than those who serve in law enforcement.” Not the communities where SWAT teams are routinely deployed; not people of color, who are targeted in 71 percent of of SWAT raids even though whites are more likely to be active shooters or hostage takers. The fact is police work is safer than it’s been in decades. Assaults on cops are down 45 percent since their peak in 1971. Violent crime has fallen by nearly half since 1991.

The real problem, according to the article, is not police abuse or an over-hyped need for military-like equipment, but the words we use. Terms like “armor,” automatic” and “assault vehicles” are improperly used to demonize law enforcement, writes Stewart. The other issue is some Americans’ tendency to criticize police abuse: “In the long run, we don’t need a ‘knee-jerk’ reaction to every use of force situation caught on camera.”