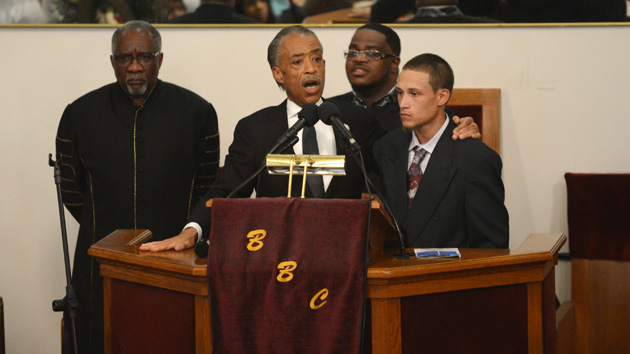 Update: Ramsey Orta was released from Rikers Island on Friday night and is now with his family, according to his lawyers. Earlier on Friday, the Staten Island district attorney’s office canceled Orta’s “bond source” hearing after reviewing paperwork submitted by the bail bondsman regarding the crowd-funded bail money. “We were satisfied that it met the requirements of the statute,” said Daniel Master, the chief assistant district attorney.

It’s been a rough eight months for the man who shot the video of Eric Garner’s death. Since Garner was killed by a police officer’s chokehold on a Staten Island sidewalk last July, Ramsey Orta, the 23-year-old who filmed the scene, has been arrested twice and has spent the past two months in Rikers Island. According to his attorneys, Orta believes he has been targeted by New York police in retaliation for having shot the video, which became a flash point for the growing civil-rights movement against police brutality.

Orta also fears that jail officials will try to poison him. “He’s not eating the food that Rikers provides him,” one of his attorneys, William Aronin, says. “Instead, he’s surviving right now off of candy bars, chips, things he can get on the vending machine or the commissary. He’s hungry, he is not happy, and he is scared.”

Last month, 19 other inmates at the jail filed a lawsuit alleging that they had fallen ill after being served meatloaf with blue-green pellets in it. They say the pellets were rat poison, a claim which New York City Department of Correction officials have dismissed. Orta has not eaten any food served at the jail since the incident, his attorneys say. Department of Correction officials were not immediately available to respond to requests for comment.

About two weeks after Garner’s death, Orta was arrested for allegedly passing a gun to a 17-year-old girl. He was sent to Rikers Island and was subsequently released. He was later arrested for allegedly selling drugs. His attorneys say it is likely Orta’s cases will go to trial. “We have to get him out of jail as soon as possible so that one, he’s safe, and two, he can prepare for his defense,” Aronin says.

On Thursday morning, Orta posted $16,250 bail with donations that he’d received on a crowdfunding website. His family has been trying to raise $100,000 for bail and legal fees, and over the past month more than 1,800 people have contributed more than $47,000.

“He should have been out today,” says Ken Perry, another of Orta’s lawyers. But the Staten Island district attorney’s office isn’t letting Orta leave just yet. The assistant district attorney prosecuting the case against Orta has requested a bail source hearing to “determine the funds being used did not come from an illegal or illicit source,” explains a spokesman from the DA’s office said. The bail source hearing is scheduled for this afternoon.

Orta’s attorneys say they have provided the district attorney’s office with an approximately 115-page packet with names and details about everyone who has donated to their client’s campaign. The packet also includes copies of the transfers from the crowdfunding website to Orta’s aunt, and from her to the bail bondsman. “Why are they keeping him in when it’s so patently obvious where this money came from?” Aronin asks.

Family members were upset by the news of the delay. “My heart is extremely heavy, these past two months have been pure hell for Ramsey,” his aunt, Lisa Mercado, wrote on his crowdthefunding page, which received a flood of donations this morning. “You are not alone, Ramsey,” one donor commented. “You did something brave for all Americans.”

In December, a Staten Island grand jury declined to indict NYPD officer Daniel Pantaleo for his role in Garner’s death. In Orta’s video, Pantaleo can be seen wrestling Garner to the ground and wrapping an arm around his neck.

Orta has reportedly been arrested 27 times since 2009 for alleged offenses including drug possession, robbery, and fare evasion. His attorneys say the majority of the arrests have not led to charges, and that they believe Orta’s claims of being unfairly targeted are viable. “There’s something more going on than would normally be the case were this not Ramsey Orta,” Perry says. “There are things here that are not right.”