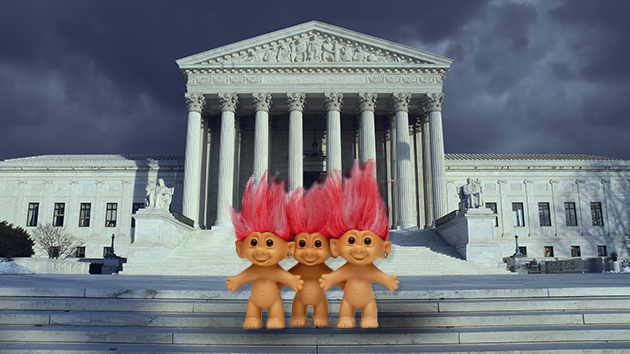 Trolls and libertarians rejoice. In a highly watched case that explored the tough question of what distinguishes protected free speech from illegal threats, the Supreme Court on Monday made it harder for the government to prosecute individuals who are making threatening statements toward others.

The court voided the conviction of Anthony Elonis, who was found guilty of issuing unlawful threats over Facebook with rants that referred to killing his estranged wife. Elonis argued that his posts, which were presented as rap lyrics, were a form of expression protected by the First Amendment. He was convicted in federal district court in Pennsylvania under the “reasonable person” standard: Would a reasonable person consider Elonis’ posts threatening?

In a 7-2 decision, Chief Justice John Roberts ruled that the reasonable person test wasn’t sufficient for a criminal conviction like this one. Avoiding touchy First Amendment questions, the court determined that Elonis’ posts should have been evaluated under a tougher standard that takes his mental state into account. That is, did he intend to follow through on his threats or did he know that his words would be seen as a threat?

“Elonis’s conviction was premised solely on how his posts would be viewed by a reasonable person, a standard…inconsistent with the conventional criminal conduct requirement of ‘awareness of some wrongdoing,'” Roberts wrote. He noted that a criminal conviction could only be supported “if the defendant transmits a communication for the purpose of issuing a threat or with knowledge that the communication will be viewed as a threat.”

The case presented a difficult First Amendment question pitting freedom of expression against the freedom to not be threatened with violence. But the justices ducked the matter. The ruling was predicated on a statutory interpretation.

Elonis was sentenced to 44 months in prison for threatening to harm and even kill his estranged wife in Facebook posts—threats that left his wife afraid for her safety. Elonis fought the charges, arguing that he could not be imprisoned because he never intended to hurt his wife. A criminal conviction for someone who had no intent to harm, he contended, violated the Constitution’s guarantee of freedom of speech. But the trial court disagreed and instructed the jury to use the reasonable-person standard.

The federal government argued that the reasonable person test is the best way to determine whether a statement is a threat. Its lawyers maintained that even if there is no intent to harm, such threats can severely disrupt the lives of those people targeted.

Civil liberties groups, including the American Civil Liberties Union, supported Elonis, fearing an encroachment on free-speech rights. Advocates for victims of domestic violence, though, argued that victims of domestic abuse “suffer the devastating psychological and economic effects of threats of violence, which their abusers deliver more and more often via social media,” according to an amicus brief. This brief, filed by the National Network to End Domestic Violence and a number of state-based anti-domestic-violence groups, argued that threats are often a precursor to actual violence.

The Elonis case was argued before the court in early December and the justices took a full six months to decide the case. Roberts was joined by Justices Antonin Scalia, Anthony Kennedy, and the court’s liberal wing. Justice Samuel Alito joined in part and dissented in part. Justice Clarence Thomas dissented.