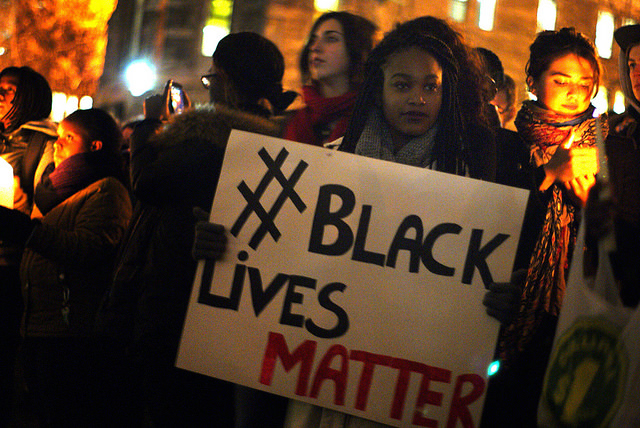 On Wednesday, the Democratic National Committee invited activists from two prominent groups within the Black Lives Matter movement to organize and host a town hall forum on racial justice for the party’s presidential candidates.

In recent months, the movement—which began with protests in response to the August 2014 killing of black teenager Michael Brown but has since grown to political organizing nationwide—has become increasingly influential in shaping the Democratic Party’s stance on racial and criminal justice.

In August, the DNC passed a resolution declaring its support for the movement. Bernie Sanders introduced a criminal justice platform days after activists from the Black Lives Matter network, which was founded after the 2012 shooting of Trayvon Martin, interrupted him at a rally in Seattle over the summer. And members of the police-reform group Campaign Zero, which is also affiliated with the Black Lives Matter movement, introduced a well-received criminal justice policy agenda.

In one of several letters to leaders of the Black Lives Matter network and Campaign Zero, DNC Chief Executive Officer Amy K. Dacey wrote, “We believe that your organization would be an ideal host for a presidential candidate forum—where all of the Democratic candidates can showcase their ideas and policy positions that will expand opportunity for all, strengthen the middle class and address racism in America.”

The letters, which were obtained by the Washington Post, come a day after leaders of the Black Lives Matter network called on the DNC to hold an additional debate focused exclusively on racial and criminal justice. “We deserve substantive responses and policy recommendations,” Elle Hearns and two other leaders of the collective wrote in an online petition—which, just one day after it was posted, had garnered nearly 10,000 signatures.

While the DNC gave a green light to a racial-justice-themed town hall discussion, committee leaders said the organization would not add another debate to the six presidential debates already scheduled, according to the Post.

Reactions to that news from Black Lives Matter movement leaders were mixed. In her interview with the Post on Wednesday, Hearns called the town hall invitation “unsatisfactory.” Campaign Zero leader DeRay McKesson, however, indicated that he is already in talks with DNC officials to coordinate the town hall and has reached out to potential venues and corporate partners.

He has also been in touch with the Republican National Committee to explore including Republican candidates in the town hall as well. “We want to bring together all of the candidates, not focused on either political party, to have a conversation centered on race and criminal justice,” McKesson said.