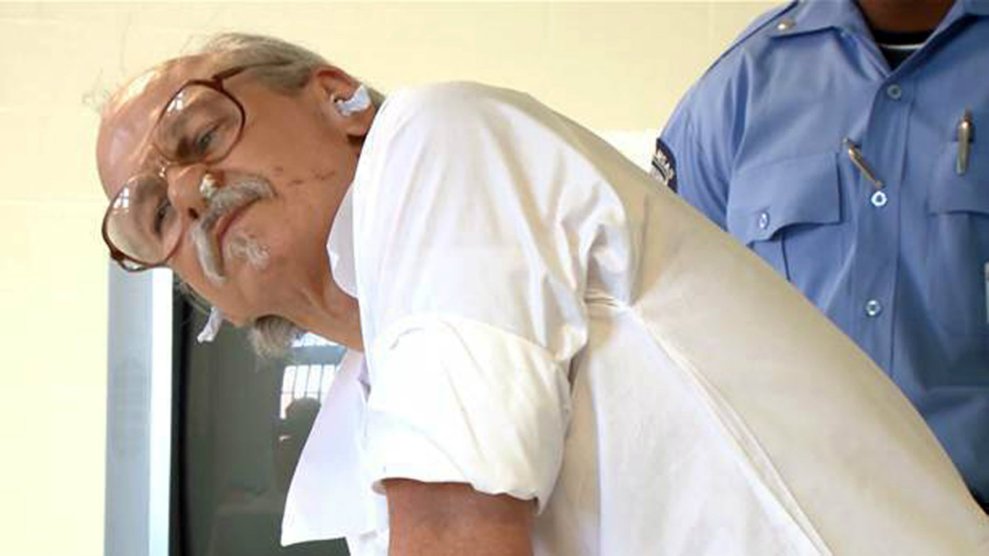 Jack Greene appears before the state parole board in October.Kelly P. Kissel/KTHV-TV/AP

Jack Greene is set to be the first man executed in Arkansas since April, when Arkansas executed four inmates in an eight-day span. Even though Greene suffers from a severe mental illness, his execution for the 1991 murder of Sidney Burnett is scheduled for November 9. Scott Braden, one of his lawyers, said on Friday he is “exactly the kind of person our laws prohibit from execution.”

In April, the state wanted to execute as many inmates as it could before its supply of the controversial sedative midazolam expired at the end of the month. The drug has been behind several botched executions in the last several years. The last man to be executed in Arkansas, Kenneth Williams, reportedly convulsed, jerked, and coughed for 10 to 20 seconds after officials administered the drug. In August, Arkansas secured more drugs after paying $250 in cash to an unknown source. (Prison officials do not have to reveal any details because they are protected by the state’s secrecy laws.) A few weeks later, Republican Gov. Asa Hutchinson scheduled Green’s execution.

In his clemency petition, Greene’s  lawyers said executing him would be a “shame.” Now 62 years old, Greene was born into abject poverty in North Carolina. His father, an alcoholic, committed suicide when Greene was just 18 months old, plunging his family into more dire straits. His grandfather, who was his surrogate father, regularly physically abused him. He accused him of stealing gasoline when Greene was 11 and sent him to the Stonewall Jackson Juvenile Training, a notoriously abusive school for troubled youth in North Carolina. Survivors’ stories of routine physical and sexual abuse have been well documented.

In 1970, Greene and a friend attempted to escape, but their car flipped over. His friend was killed, and Greene suffered a head injury. Family members say he was never the same after returning, and he dropped out of school after failing eighth-grade twice. By 1982, he began exhibiting odd behavior. Three years later he was involuntarily committed to a state mental institution after threatening to kill his brother Tommy.

Greene moved to Arkansas and in July 1991 was living with his girlfriend, Donna Johnson, and their daughter. After Greene threatened her with violence, Johnson took their daughter and left. Greene then went back to North Carolina and killed his brother. A few days later, he returned to Arkansas and killed Burnett, a friend of his ex-girlfriend. First, Greene was tried in North Carolina and given a life sentence. In 1992, he was tried  and sentenced to death in Arkansas.

In solitary confinement since 2003, Greene’s mental state has deteriorated over his last two decades behind bars. According to his clemency petition, Greene is routinely found with blood smeared on his face, and he stuffs his ears and nose with toilet paper. He eats out of his sink and uses his toilet as a desk. Greene is convinced that prison officials are conspiring to make him sick and have inflicted damage on his central nervous system. Medical tests have found no evidence of these injuries and concluded his accusations are a result of his delusional thinking.

Although we personally hold different positions on the death penalty as policy, we are united in the belief that the execution of a man as mentally ill as Jack Greene would be morally and ethically wrong.”

The prison’s medical staff has consistently observed Greene’s strange behavior. One doctor described the inmate as “mentally unstable,” engaging in “yoga-ish contortions of his body.” In one instance, Greene was behaving so bizarrely that the doctor couldn’t complete her physical exam of him. Finally, Greene’s personal writings, according to the clemency petition, “reflect fixed delusions.”

In his last will and testament, Greene asked for his head to be surgically removed after the execution so his brain can be examined. He believes that this examination will prove his imagined injuries are real.

In early October, the Arkansas Parole Board declined to spare Greene’s life. Late last month, 28 mental health officials sent a letter to Arkansas Gov. Asa Hutchinson urging him to halt the execution because of Greene’s illness. “Although we personally hold different positions on the death penalty as policy,” they wrote, “we are united in the belief that the execution of a man as mentally ill as Jack Greene would be morally and ethically wrong.”

Last Friday, Judge Jodi Raines Dennis of the Jefferson County Circuit Court dismissed a complaint Greene’s lawyers filed in September asking to halt his execution, and Gov. Hutchinson cleared the way for him to be put to death. “Jack Greene acknowledged that he understands he is being executed for the murder of Sidney Burnett,” Hutchinson said in a statement. “He is competent to be executed.”