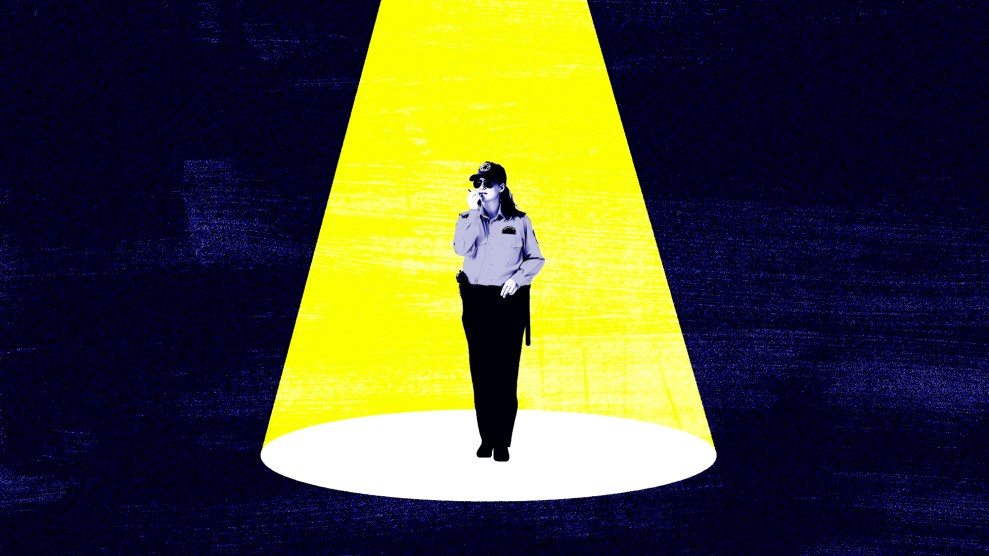 A pair of class-action lawsuits filed recently against the sheriff’s office in Cook County, Illinois, allege that the office has failed to protect female workers and female public defenders against frequent and egregious sexual harassment—by male inmates at the Cook County Jail in Chicago.

Inaction by Sheriff Thomas Dart has left the jail “an objectively abusive and hostile workplace for women,” but not for men, claims a lawsuit filed in federal court last Wednesday by five female guards. The second lawsuit, filed on Sunday by attorneys at the Cook County Public Defender’s Office who visit their clients in the jail, makes a similar claim. Dart’s neglect, both lawsuits say, amounts to sex-based employment discrimination under the Civil Rights Act of 1964 and the Illinois Civil Rights Act and violates the women’s constitutional right to equal protection.

Male supervisors allegedly told female guards that the inmates’ disgusting behavior is what they had “signed up for.”

The guards claimed that male inmates regularly engage in “exhibitionist” masturbation in the presence of female guards, medical staff, and other jail personnel, sometimes aiming at them when they ejaculate; the inmates also grope women’s breasts, press their penises against women’s buttocks, throw feces and urine at them, make lewd comments about their physical appearance, proposition them for sexual favors, target them with sexual slurs, and/or threaten them with violence including rape and murder. One guard was allegedly harassed by members of a prison gang formed specifically to intimidate female staffers. Marni Willenson, an attorney for the guards, told me gang members earn points based on the egregiousness of their behavior. Another guard was confronted by penises inserted through the delivery slot in cell doors as she walked down a tier bringing food from inmate to inmate, according to the suit.

The women in question, both lawsuits assert, fear for their safety—the women also claim male supervisors discourage them from reporting the harassment, and that when they make a report (a frequent occurrence), it is rarely taken seriously.

The guards’ lawsuit says male supervisors have responded to complaints of harassment by telling the women it’s what they had “signed up for,” that the harassment was a “compliment,” or that the masturbation shouldn’t bother them because they have likely seen a penis before. When one guard reported that an inmate had threatened to rape her, a male superior allegedly responded that “men can be raped too.” Male colleagues often don’t intervene when the abuse is happening, Willenson told me, because the jail has a policy against touching inmates—a rule aimed at preventing excessive force lawsuits. (The Cook County Sheriff’s Office did not respond to questions related to this story.)

“This is just way beyond anything that’s tolerable or can be justified.”

The harassment is “everywhere in every context where there’s contact with the inmates,” says Willenson. “For correctional officers, they are directly responsible for the supervision and transport of the detainees. So they are on the floors with them. They have to deliver food and other items to their cells. They have to do well-being checks, so they have to walk up to the cells and look in through the open area of the cell to count people.”

The lawsuits come at a moment of national reckoning with sexual harassment in a range of industries, except the harasser in this case is not a boss or colleague, but a third party. The women are seeking a court order that compels the sheriff’s office to enact policies to curb the harassment and to appoint a monitor to oversee the changes.

The lawsuit filed by the female attorneys also names the Cook County Public Defender’s Office and chief public defender Amy Campanelli as defendants. Among other allegations, the suit faults Campanelli for asking the sheriff’s office to end certain policies aimed at curbing the harassment, such as handcuffing inmates who are waiting to attend court.

A March 2017 letter Campanelli sent to Sheriff Dart said harassment of her staff attorneys had reached a “crisis” point and was “affecting my ability to provide legal counsel to my clients.” She has blamed staffing cuts in the jail for exacerbating the problem. The sheriff’s office has said that budget cuts necessitated the reductions—the county is in the midst of a financial crisis.

The jail, one suit says, “instituted a program rewarding serial masturbators with pizza” if they stopped. But this backfired.

Dart’s office has made some attempts at changing inmates’ behavior. According to the public defenders’ suit, the jail for a time “instituted a program rewarding serial masturbators with pizza” if they stopped for 30 days. But then inmates started jerking off so they could quit and get the pizza. In early 2017, some inmates were required to wear “special jumpsuits to help prevent them from reaching their penises,” but the practice was ended after some “burned the jumpsuits using microwave ovens.”

Guards also began handcuffing inmates waiting to go to court, but stopped after Campanelli complained about the practice. In May, fewer women were harassed after more guards were added to each shift, but the sheriff’s office soon removed the extra staff to save money, according to the attorneys’ suit.

The sheriff’s office supports legislation that would increase penalties for inmates who commit sexual offenses. But Campanelli’s office—whose attorneys often represent the same inmates—has called that a bad idea.

The sheriff’s office does have additional options short of hitting inmates with new charges, Willenson points out. For instance, it could cut off an inmate’s access to “commissary, visits, privileges, probably movement around the jail. There are art activities and other activities, and maybe they don’t get access to some of those…There is also an appropriate use of segregation.”

Charges are warranted when there’s a physical assault, she says—including charging inmates with sex crimes. Some legal advocates argue, though, that stacking charges doesn’t deter people who are already in jail from behaving badly—and they worry that hitting them with offenses that require registration as a sex offender will have long-term consequences. They concur with Dart that the increase in harassment could be detainees’ way of protesting the conditions of their detention, which may have worsened in recent years due to budget cuts. “I think masturbation is a distraction,” Alan Mills, a civil rights attorney who has represented Illinois inmates in lawsuits challenging jail and prison conditions, told the Chicago Reader earlier this month. “It’s not the real problem—it’s just the symptom of the problem.”

Willenson does not disagree that the detainees are lashing out: “They’re inmates in a jail, they’re disempowered, the government has taken them and detained them and put them in a correctional facility and taken away their freedom. And this is a way they’re exercising what power they have.”

Even so, Willenson argues, it’s not okay to let abusive behavior go unchecked. “You have to impose a discipline that is painful for people so they don’t want to do it. There has to be enforcement of the rules of conduct,” she says. “C’mon! Honest to God.”