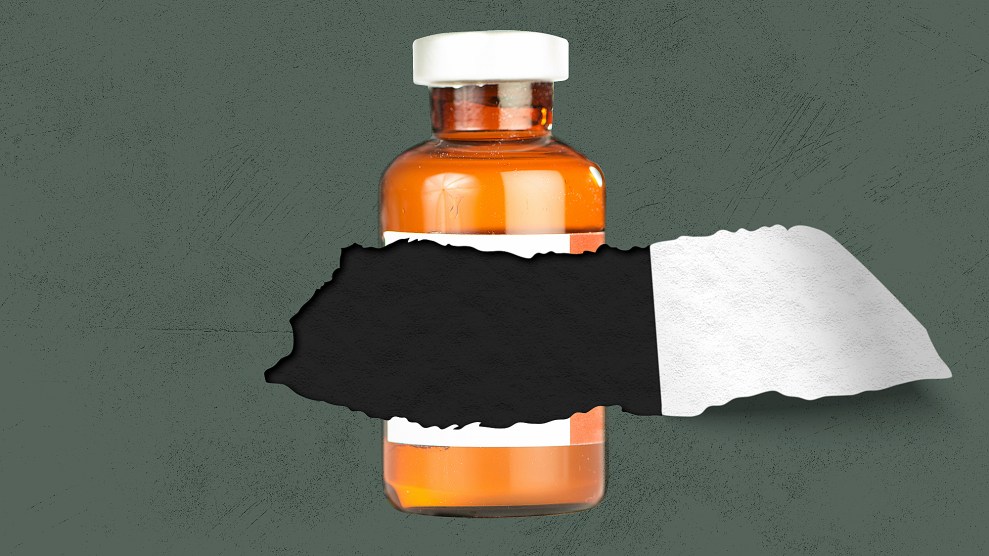 One August afternoon, Wendy Kelley, the director of the Arkansas Department of Corrections, picked up 40 vials of a controversial sedative used in prisons across the country to put inmates to death.

The details of where she picked up the vials and who sold the drugs to the prison are not known, but according to BuzzFeed, Kelley paid an undisclosed supplier $250 in cash for midazolam. Anti-death penalty advocates cried foul, questioning the acceptability of the state paying cash to an unknown seller, for drugs linked to several botched executions in recent years. But Arkansas didn’t have to respond to any questions about the incident, because its secrecy law shields the public from obtaining certain information about executions. Three weeks later, when Arkansas set November 9 as the execution date of Jack Greene, a severely mentally ill man, Greene’s lawyer, John Williams, told Vice how “troubling” it was that now all of Arkansas’ execution drugs “come from these side-of-the-road suppliers.”

But what Arkansas did wasn’t illegal—and, if death penalty states have their way, soon it won’t be out of the ordinary either. Most secrecy laws protect the identity of people involved in the execution—such as the person administering the drugs—but in recent years, states have expanded these laws to include drug manufacturers. “As drugs have become harder to obtain through legitimate means,” Robert Dunham the executive director of the Death Penalty Information Center explains, states have “resorted to secrecy to hide questionable activities.”

“As drugs have become harder to obtain through legitimate means,” states have “resorted to secrecy to hide questionable activities.”

In recent years, drug manufacturers and drug wholesalers have been refusing to sell their products to correctional systems that intend on using the drugs to execute inmates. This has left states either scrambling to come up with alternative drugs, halt executions, or rely heavily on shrouding the whole process in secrecy—an option that legal experts and anti-death penalty activists believe is antithetical to democracy. “Secrecy provisions are undemocratic and a threat to public accountability,” Dunham says. When inmates and lawyers don’t have complete information about drugs used in an execution, it stymies their ability to mount legal challenges, or worse: If something goes wrong during the execution, it’s harder for the inmate’s legal team to investigate.

In Arkansas, for instance, the secrecy law states that information regarding the names and roles of personnel involved in the execution process are not subject to the Freedom of Information Act. After the Arkansas Department of Correction announced that it had obtained more midazolam in August, Steven Shults, a Little Rock lawyer, submitted a FOIA request for information on the drugs, but he was denied. He subsequently filed a lawsuit against the ADC alleging Arkansas had violated the state’s FOIA law.

The case made it all the way to the Arkansas Supreme Court. In early November, the court ruled that the law protected suppliers and sellers—but not manufacturers. Court records revealed that the drugs Kelley had purchased for $250 had been manufactured by Athenex, a company that has agreements with its distributors prohibiting them from selling to prisons for lethal injections. “Athenex does not want any of our products used in capital punishment,” the company said in a statement on its website in November. “Athenex does not accept orders from correctional facilities and prison systems for products believed to be part of certain states’ lethal injection protocols.”

So, how did Arkansas officials finally get their hands on midazolam manufactured by Athenex? The answer is unclear.

“We are investigating the possibility that a pharmacy we service received the product from us and then resold it to the state in violation of our contract.”

The company that sells the drug, AmerisourceBergen, says it did not violate its agreement with Athenex. “We are investigating the possibility that a pharmacy we service received the product from us and then resold it to the state in violation of our contract,” a spokesperson said in a statement. The company says an investigation into how the drug ended up being sold to a prison official has been launched.

South Carolina is one of the many states without any execution drugs, but that didn’t stop it from scheduling Bobby Stone’s execution for December 1. Since he had not yet exhausted his appeals, the procedure was called off, and Republican Gov. Henry McMaster used the thwarted execution to hold a press conference urging legislators at the state house to push through a secrecy law.

They had tried before. In 2015 and 2016, laws to protect the identity of anyone involved in an execution, including drug providers, were introduced in South Carolina, but neither have been voted on by the full assembly. “The [South Carolina] Department of Corrections will remain focused on working with Governor McMaster and the legislature to pass a Shield Law,” spokesperson Jeffrey Taillon said in an emailed statement to the New York Times in November.

Then, there is the state of Nebraska. In 2015, the state Legislature voted to repeal the death penalty. Republican Gov. Pete Ricketts vetoed their vote, but the lawmakers overrode his veto. In response Ricketts, and his GOP megadonor father, Joe Ricketts, spent $400,000 on a campaign to reinstate the death penalty. Last November, Nebraskans voted overwhelmingly in favor of bringing it back.

A state lawmaker then introduced a bill to protect the identities of drug suppliers in January, and lawmakers debated it in April. The law is now pending in the Legislature.

Even with the death penalty reinstated, Nebraska faced a similar drug shortage problem, which officials decided to solve with a highly controversial method. The state has proposed using the narcotic fentanyl as part of the cocktail given to kill an inmate.

In November, death row inmate Jose Sandoval received a letter informing him that the state planned to execute him with four drugs including the yet-untested fentanyl. A date has not yet been set, but Sandoval says he plans on challenging the state’s efforts. The inmate says he will be represented by an American Civil Liberties Union lawyer, but it is unknown if he will have any other representation.

For legal experts, informing the public of every detail of the procedure is of utmost importance. “Transparency is at the heart of holding states accountable.” Amy Rose, the legal director at the American Civil Liberties Union of Nevada, says. “When they try to shut that down, I think the question to ask is ‘why?'”