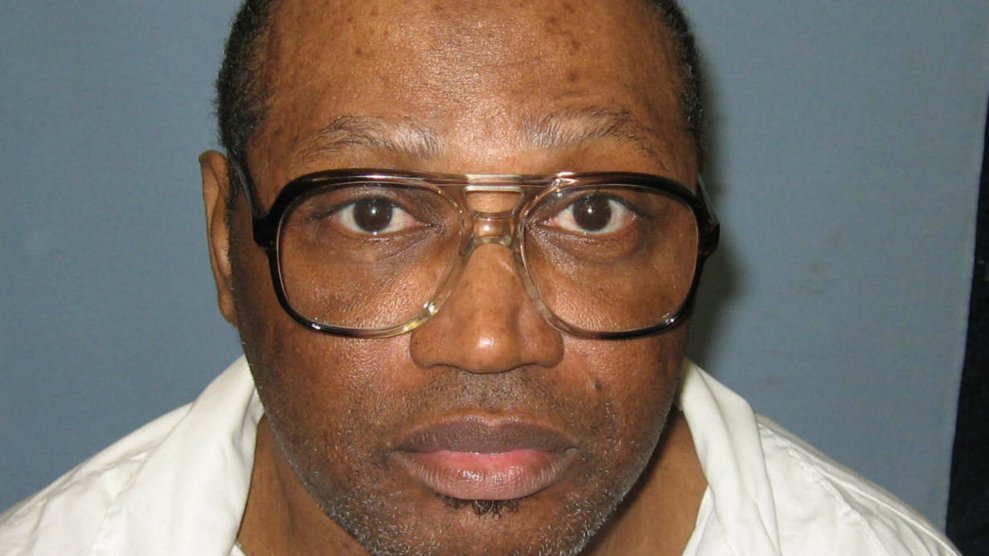 Update, January 26, 2018: On Thursday night, just 30 minutes before Alabama planned to execute Madison, the US Supreme Court stayed his execution while the high court decides whether or not to review his case.

On Thursday, Alabama plans to execute Vernon Madison, an inmate who has been on death row for more than three decades for the 1985 murder of a police officer. Madison was scheduled to die in May 2016, but his lawyers successfully intervened when a rather drastic competency issue presented itself: As as result of several strokes and neurological deterioration, Madison could no longer remember the crime for which he was charged. “I never went around killing folks,” he told a psychologist in 2016.

Madison’s case goes to heart of the question of how competency is judged in death penalty cases. The Supreme Court has ruled that mentally incompetent prisoners cannot be executed, but even that standard is not cut and dry. An inmate with a severe mental illness may be ruled competent to be executed as long as he or she understands their punishment and why it’s happening, leaving states plenty of room for interpretation.

Madison, now 67, has spent almost half of his life on Alabama’s death row. According to court documents he is legally blind, cannot walk without assistance, and slurs his speech. “[Madison] is failing mentally and cognitively,” Angie Setzer, a lawyer for Madison, tells Mother Jones.

In April 1985, Madison, who is black, killed Julius Schulte, a white police officer who had been called to Madison’s residence for a domestic issue. Madison shot Schulte twice before turning his gun on Cheryl Greene, his girlfriend, who survived the shooting. He was charged with capital murder and convicted, and though his case ran into legal complications resulting in three different trials, he was sentenced to death each time.

Madison was no stranger to life behind bars before coming to Alabama’s death row in 1985. He had previously been charged with robbery and assault, and spent 14 years incarcerated in Misssissippi. During his time in prison in Mississippi, Madison received “psychiatric assistance” more than 30 times. A prison doctor concluded that he suffered from “a paranoid illness of profound proportion.”

“He can’t really connect the offense to the punishment. There’s a real disconnect.”

Madison’s case was further complicated by bad luck and incompetence. Madison was first convicted and sentenced to death in 1985, but a state court sent the case back to trial because prosecutors improperly struck black people from the jury. He was tried again in 1990, but the case was sent back to trial yet again because of an improper testimony from an expert witness for the prosecution. At his third and final trial in 1994, the jury recommended life in prison, but Judge Ferrill McRae overruled the panel and sentenced Madison to death. According to court documents, Judge McRae has overruled six life sentences, more than any other judge in Alabama.

Madison’s lawyers believe that his memory problems began when he suffered two major strokes in 2015 and 2016. The 2015 stroke affected his vision and his motor coordination. Afterwards, he asked prison staffers to tell his mother that he had a stroke even though his mother had passed away years before. After the 2016 stroke, medical records indicate that Madison was “very confused” and “disoriented” as well as showing signs of memory loss. In February 2016, after Madison told his legal team that he planned to move to Florida after he was released from prison—a clear sign of confusion given that he was sentenced to death—they decided to ask a state court for a competency hearing.

The hearing was granted and in April 2016, Madison was evaluated by Dr. Karl Kirkland, who was retained by the state of Alabama, and Dr. John Goff, who Madison’s counsel hired. The two conclusions could not have been more different.

Dr. Goff diagnosed Madison with major vascular neurological disorder and said Madison suffered from retrograde amnesia and could not recall certain events that occurred before his stroke in 2016. He said that Madison could not describe the sequence of events from the day of his crime to his arrest or to the trials. According to court documents, Madison said that other people had told him that he had three trials and Judge McRae had overridden the jury. The doctor testified that it didn’t appear that Madison remembered he had murdered Schulte in 1985. Madison was able to tell Dr. Goff that he “must have been” convicted in Mobile and that the crime “must have been a murder” but denies that he actually committed the crime. As a consequence of his memory issues, “he can’t really connect the offense to the punishment,” Madison’s attorney Setzer says. “There’s a real disconnect.”

But Dr. Kirkland offered a different diagnosis. While noting that Madison’s strokes had caused a cognitive decline, according to court documents the prosecution’s doctor said that he could still recall memories from his childhood and could describe his previous appeals and the fact that a judge had overridden the jury during his third and final trial. “Mr. Madison…appears to be able to have a rational understanding of the sentence, the results or effects of the sentence,” Kirkland’s report concluded, “and to still be able to discuss defense and legal theories with his attorneys.”

Kirkland’s report was the more persuasive. A state court ruled that Madison was competent to be executed the following month.

The state supreme court subsequently denied a request for a stay of execution just one day before Madison was scheduled to be put to death on May 12, 2016. But, the 11th Circuit Court of Appeals intervened in the final hours and granted the stay. The same court found Madison incompetent to be executed in March 2017, and the state of Alabama appealed the decision to the US Supreme Court.

In November 2017, the nine Supreme Court justices overturned the 11th Circuit ruling saying that the lower court had overstepped, but did not address the question of whether or not a state may execute an inmate who cannot remember his crime.

In the days leading up to the execution, Madison’s team of lawyers have not stopped trying to get the execution called off. Setzer and her colleagues filed another pleading to the US Supreme Court, this time asking the court to stay the execution based on how his declining health has affected his memory. “At this point,” Setzer says, “We’re hopeful the court will do the right thing.”