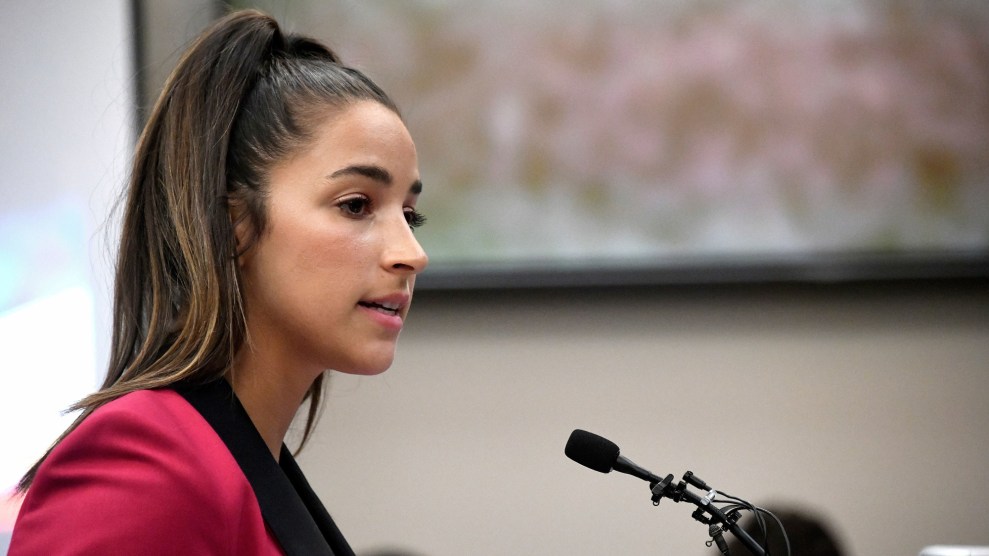 Since last Tuesday, nearly 100 women have confronted Larry Nassar, formerly a team doctor for USA Gymnastics and a doctor at Michigan State University’s sports medicine clinic who has pled guilty to multiple counts of sexual assault and child pornography, one by one recounting harrowing stories of abuse. The number of those giving statements is expected to rise to 144 by the time Nassar is sentenced later this week. They include former patients, college athletes, and gymnasts, as well as several high-profile Olympians, including three members of the gold-medal-winning London 2012 US gymnastics team—Aly Raisman, McKayala Maroney, and Jordyn Wieber. Many of the women are also condemning USA Gymnastics and MSU for their poor handling of the allegations against Nassar.

And yet, the three major cable news channels dedicated just shy of 20 minutes of combined air time to the Nassar hearings, according to an analysis by Media Matters.

Over 100 women spoke out about Larry Nassar’s sexual abuse this week. Cable news spent less than 20 minutes covering it. https://t.co/yqgUoJ8ikU via @LisPower1 pic.twitter.com/sobiafiDxG

To be fair, it was a week dominated by the threat of a government shutdown, but, as Media Matters puts it, this is “one of the largest-scale sexual abuse stories in recent history,” coming “at a time when the #metoo movement is flourishing in some other industries.” Even so, it didn’t really break through on CNN, MSNBC, and Fox News. CNN dedicated just about 12 minutes of coverage to the court proceedings last week, much of it on Friday, when New Day co-anchor Alisyn Camerota spoke to Jamie Dantzscher, a former Olympic gymnast who told the former doctor in court: “You even had the audacity to abuse me in my own bed, in my own room at the Olympics.” Before then, the network had spent just four minutes on Nassar coverage.

What’s more, it wasn’t just coverage of the Nassar hearing that failed to gain air time. Even as scores of protesters flocked the streets over the weekend to rally a year after the Women’s March, Media Matters found that the Sunday talk shows spent little time covering the demonstrations. Apart from a mention from a conservative panelist on CBS’ Face the Nation and acknowledgments from hosts at ABC’s This Week and NBC’s Meet the Press, the most significant discussion came during a 20-second exchange between panelists on Meet the Press, according to Media Matters.