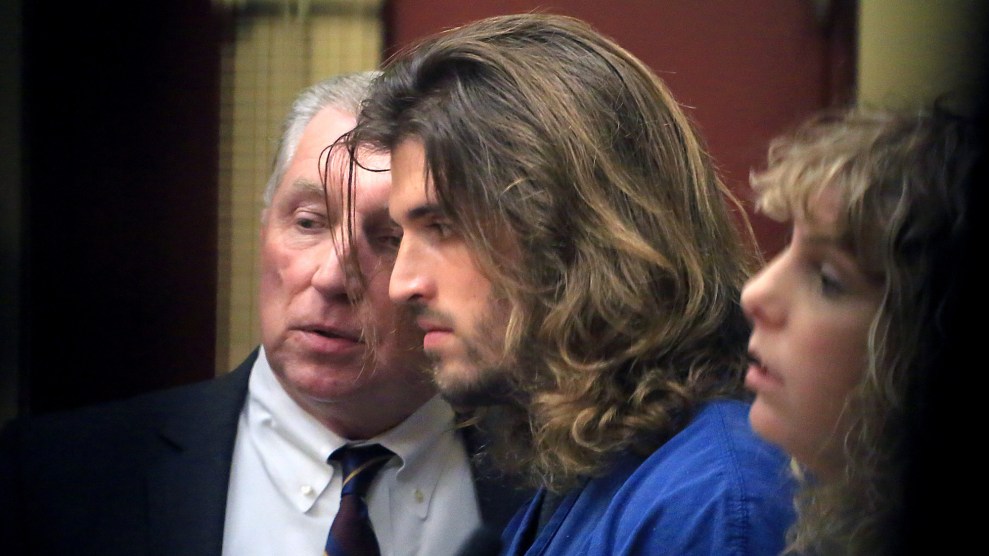 A few weeks into the fall 2016 semester at the University of Wisconsin-Madison, a student was pedaling down a road near campus when she nearly hit Alec Cook with her bike. Cook was 20 years old and a real estate major, and he and the woman hung out about four or five times over the next week or so, she later told police officers. On October 12, they got dinner and headed to the library for a mid-week study session.

That night, the woman agreed to walk back to his apartment but says she told him she didn’t want to move too fast. What started on Cook’s bed as “light kissing,” in her words, quickly turned into a violent sexual assault, according to a description of criminal charges filed a couple weeks later. Over the course of two and a half hours, the woman said, Cook pulled her into “every imaginable position,” hit her in the face, pulled her hair, and choked her till her vision started to blur.

“[I was] telling him he needs to stop with every gulp of air,” the woman later said to an investigator, according to the criminal complaint. Then, she says, “I realized he was bigger and stronger. I thought maybe I could just wait this out and then get away.”

She contacted the City of Madison police a few days later. Cook was arrested on October 17, 2016. His picture quickly began circling on social media and in local news reports, and within a week “dozens” more women had come forward with allegations against him, city police said. “I saw the news story and was empowered by another girl being able to tell what happened to her, that I thought I could now finally tell,” one 20-year-old woman told a detective within days of Cook’s arrest.

Police ultimately filed charges based on 11 women’s cases. Now, more than a year after his arrest, Cook awaits trial for 23 counts of criminal behavior—ranging from sexual assault to stalking to disorderly conduct—that allegedly occurred between September 2014 and October 2016. Four UW-Madison students, including the one who first reported him last year, say that Cook raped them using force or the threat of force, or while injuring them.

The case against Cook still has months to go before trial but was dealt a serious blow today when Dane County Circuit Court Judges John Hyland and Stephen Ehlke ruled that a cryptic black leather journal that police found, read, and photographed in Cook’s apartment was the result of an illegal search, and could not be used as evidence against him. One page of the notebook listed characteristics of the women he was pursuing, including “where met,” “interesting facts/commonalities,” “present goal,” and “last step.” Cook’s attorneys called it “a way to try to keep track of how his social interactions are going.” Police called it an “index” of what Cook wanted to do with women—including statements of sexual desires and a box marked “killed?“ with a faint strikethrough.

Without the journal, prosecutors will have to struggle to paint the charges against Cook as part of a pattern of behavior, a reality they were already facing since earlier this year when the defense persuaded judges to break the charges into a total of seven different jury trials. So unlike in the court of public opinion, where the accusations against powerful figures like Harvey Weinstein, Bill Cosby, and Kevin Spacey ring truer as a greater number of victims speak up, the sheer number of women who have come forward to accuse Cook of sexual assault won’t count for much in criminal court.

If found guilty of the multiple sexual assaults he’s charged with, Cook would become one of the few publicly named and convicted repeat campus rapists—even though many student victim advocates and policymakers, including the Obama White House, have long believed that most campus rapes are the doing of serial offenders. But that’s a conclusion that has become highly controversial among researchers studying sexual assault. The finding traces back to a 2002 study led by retired clinical psychologist David Lisak, who claims that the majority of campus rapes are the work of serial predators. Lisak analyzed data about the behavior of 1,882 men, drawn from surveys of people on a commuter college campus in Massachusetts. He found that 120 admitted to committing or attempting rape at some point in their lives. Of those, 76 men, or 63 percent, admitted to multiple nonconsensual acts and were classified as repeat rapists.

There are problems, though, with Lisak’s methodology, including the fact that some of those surveyed reportedly weren’t students (more on that here). In 2015, JAMA Pediatrics published a study criticizing his analysis and concluding that “exclusive emphasis on serial predation to guide risk identification, judicial response, and rape-prevention programs is misguided.” That paper, led by Georgia State University psychology professor Kevin Swartout, looked at 1,642 male students at two southeastern universities and found that 7.9 percent committed rape during college. For three-quarters of those men, the behavior was limited to one academic year—which, Swartout’s team concluded, meant that most campus rapists did not commit rape consistently across time. The dueling studies have led to intense criticism from both sides, and the issue remains incredibly muddy; it’s still far from clear whether campus rape is caused primarily by serial rapists or are one-time offenses from a broader portion of male students.

Convictions in Cook’s case wouldn’t put an end to the empirical debates, but they would put a face to the shadowy “serial campus rapist” figure present in the scholarship for more than a decade. There aren’t many widely known examples, simply because it’s uncommon for any campus rape case, serial or not, to be prosecuted. Despite numerous studies finding that about 1 in 5 college women are affected by various kinds of sexual assault, including rape, only a fraction of cases are reported to authorities. Fewer still result in formal charges. Even considering rape cases in general, not just on campuses, only between 8 and 37 percent of reported incidents are ever prosecuted, according to one analysis.

Trials of serial campus rape cases are likewise rare; according to a search of news clips, only a handful have made it to court in recent years, and they’ve seen mixed outcomes. One case that did result in multiple convictions happened at the University of Minnesota, where Daniel Drill-Mellum pleaded guilty last summer to raping two women during college parties and was sentenced to 74 months in prison. Meanwhile, John Enochs of Indiana University was accused of two rapes in 2015 but accepted a plea deal the week before trial began last year. The charges in his case were reduced to “battery with moderate bodily injury,” a misdemeanor that carried no prison time. And earlier this year, former Kansas State University student Jared Gihring pleaded not guilty to raping two classmates. According to the Kansas Mercury, he was convicted on one charge for raping an unconscious woman at a fraternity house and sentenced to nearly 13 years in prison, but he was acquitted of the second charge, also involving an intoxicated woman.

This legal landscape is why it’s so surprising that the allegations against Alec Cook have made it as far as they have. The sheer number of women coming forward was surely a factor in the prosecution’s decision, at least for the moment, to pursue the charges at trial rather than make a plea deal. But, as it turns out, the number of accusers won’t actually make this case much easier for the DA’s office. This summer, Dane County judges decided to separate the case into seven different jury trials: one apiece for each of the four women whose experiences led to charges of second-degree sexual assault, one trial for the two women accusing Cook of stalking, and two trials for a combination of lesser allegations. That ruling likely means that each jury won’t hear evidence about incidents that are not specifically on trial.

And now today’s ruling will make it even harder for prosecutors to draw connections between the cases, which they might have done by pointing to Cook’s classification system for women that appeared evident in the black leather journal. And while the judges’ order deemed that the journal was examined in an illegal search, it also has implications for additional evidence. Police used a description of the journal to get a search warrant for Cook’s apartment—and they seized other notebooks with potentially incriminating contents. Evidence found in that second search will also now be excluded. “Getting with the women I want Has Become a MUST. Or else I’ll end up Killing [sic] myself,” Cook wrote in one, according to a court filing, while under “Goals to be accomplished by 7/26/17,” he wrote “Become a master PUA,” or pick-up artist.

The various decisions limiting the exploration of Cook as a potential serial offender will almost certainly make it harder to secure a conviction. For one thing, jurors won’t be allowed to take into account the total number of accusers when deciding whether one individual’s claims are credible. In a brief arguing for a single trial covering most of the charges, prosecutors claimed that Cook waged a “campaign” of attacks tailored to target female students at UW-Madison and that jurors had to hear about the crimes together to understand the larger pattern at work. Separate trials, they wrote, would allow the defense to mount gratuitous attacks on the accusers: that the women were “fabricating the crimes against them, overly sensitive, misinterpreting rude or mere socially awkward behavior as criminal”—or that they had only made allegations because they were following the lead of others. “Isolated from the context of Mr. Cook’s behavior, there are countless attacks on a victim’s credibility that may be based only upon mythology or stereotypes about sexual assault victims,” prosecutors said.

Indeed, Cook’s lawyers have already signaled that they will attack the women’s credibility at trial. In a court filing this summer, the defense team said they would argue that the women actually consented to their encounters—and that the question of consent “turns on the words and actions of the alleged victim.”

“There are no victims unless and until a jury says somebody was victimized,” one of Cook’s attorneys, Christopher Van Wagner, told reporters after an early hearing. “When did somebody decide to become a victim, is the question that’s going to be asked in this case.”

The first trial, involving the woman who says she was assaulted in October 2016, is scheduled to begin in late February. Cook has been expelled from UW-Madison and remains free on bond, according to the Journal Sentinel, after his father posted a $100,000 cashier’s check last year.