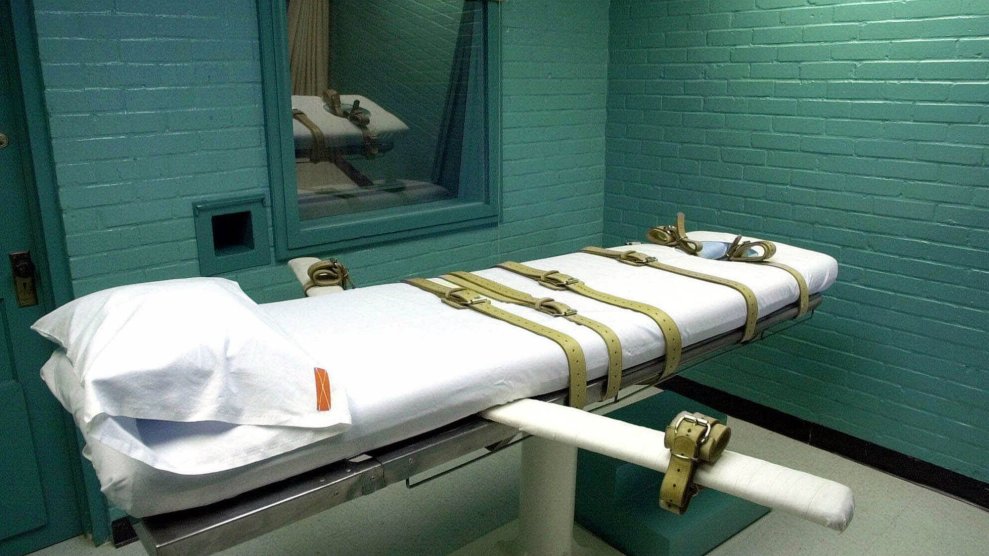 The execution chamber in TexasPat Sullivan/AP

There are several reasons for this, but one of them is that capital punishment has been rapidly falling out of favor with prosecutors—last year also had the second fewest new death sentences since 1976. So it’s remarkable that this month, three people are scheduled to die in a single day. The last time this happened in the US was April 28, 1999, when Texas, Missouri, and Virginia each put a man to death. But barring any intervention from the courts, February 22 could tie that record with executions scheduled in Florida, Alabama, and Texas.

The first person scheduled to die is Florida inmate, Eric Branch, whose execution is set to begin at 6:00 pm. He’s been on death row since 1994 for the 1993 sexual battery and murder of Susan Morris, who was walking to her car on the University of West Florida’s campus.

Last year, lawyers attempted to use a new law to vacate his death sentence. Florida law now requires a unanimous jury in order to sentence someone to death, but Branch was sentenced to death by a vote of 10 to 2. The year he was sentenced became more significant in determining his fate than the non-unanimous jury. His death sentence was handed down in 1994, but only inmates sentenced after 2002—which was the same year the US Supreme Court ruled that a jury not a judge must decide if a defendant is eligible for the death penalty—are eligible to have their sentences commuted. Gov. Rick Scott (R) signed his death warrant on January 19, 2018.

When those efforts failed, Branch’s lawyers tried to use the fact that he was 21 at the time of the offense to get him off death row. In 2005, the US Supreme Court ruled that executing an individual under the age of 18 is a violation of the Eighth Amendment that prohibits cruel and unusual punishment. But, as Branch’s lawyers said in court documents last month, there is an emerging consensus that individuals in their late teens and early 20s are cognitively comparable to juveniles. Branch turned 22 a few weeks after the murder.

Just one hour after Branch is scheduled to die, Alabama prison officials will be preparing to execute Doyle Hamm who has been on death row since 1987 for the murder of Patrick Cunningham, a motel clerk. He is now 61 years old, having spent more than half of his life in prison. Hamm is also suffering from cranial and lymphatic cancers. According to court documents, the cancer was discovered in 2014, and he underwent treatment. But in early 2017, the cancer returned, and a doctor ordered surgery.

In September 2017, a doctor examined Hamm for “accessible veins” which prison staff could use to inject him with the lethal drug cocktail. After an extensive examination, the doctor concluded that because of his illness and previous intravenous drug use, finding a suitable vein would be unlikely. Difficult to access veins can lead to a botched execution, such as when Oklahoma inmate Clayton Lockett died of a heart attack after staffers struggled to find a vein to insert the IV with the drug cocktail. Because of his compromised veins, Hamm’s lawyers say his execution could amount to cruel and unusual punishment.

Hamm was scheduled to have surgery three months after he was examined; instead, the Alabama Department of Corrections canceled it and issued a death warrant.

Hamm’s case took a surprising turn on February 6, when a judge issued a stay of execution. But Alabama’s attorney general quickly filed an emergency appeal challenging the stay and the 11th circuit vacated it, after ordering a medical examination and requesting that the findings be presented at a hearing no later than 5:00 pm Central Standard Time on February 20. “I am confident that the emergency medical examination and emergency hearing will vindicate our position,” Hamm’s lawyer Bernard Harcourt said in a statement.

“I am confident that the emergency medical examination and emergency hearing will vindicate our position.”

If the intervention is unsuccessful however, at the same time Hamm’s execution is scheduled to begin, a few hundred miles west in Texas, prison officials will be preparing to put 38-year-old Thomas Whitaker to death. In 2007, he was convicted of arranging the murder of his family in order to obtain $1 million in inheritance.

In December 2003, Whitaker, his brother, and his parents entered their home in Sugar Land, Texas, after a dinner celebrating his graduation from college. (Records show that Whitaker never actually graduated.) Upon entering the home, each member of the Whitaker family was shot by Christopher Brashear, the gunman Whitaker had hired to give the appearance of an interrupted burglary. In order to avoid suspicion, Whitaker wrestled with the attacker and got shot in the arm. The inmate’s mother Patricia and his brother Kevin died. Whitaker’s father Kent survived.

The police began investigating the crime but could find no leads. In July 2004, Whitaker fled to Mexico and lived there for a year under the name Rudy Rios. But in August 2005, Steven Champagne, who had given the gunman a ride to the house, confessed to police that he was involved and described all the circumstances.

And now his father is fighting to save his remaining child’s life.

In the clemency petition for the inmate submitted in January, his lawyer wrote:

“There is no reason for this particular execution to take place. No one close to the people involved in this case want it to happen. Some passionately oppose it. Others simply wish their lives could be restored to the time before the crime. It is only the State of Texas, through its employees and representatives, that mechanically marches forward onto the date of death.”

Whitaker’s relationship with his father has changed after he arrived on death row. “They have actually grown closer,” Keith Hampton, Whitaker’s lawyer says. “If the parole board recommends clemency and the governor commutes his sentence to life in prison, a dark cloud will be removed from their lives.”

On February 13, Kent Whitaker met with the parole board in an effort to spare his sons life. “I’m going to be thrown into a deeper grief at the hands of the state of Texas,” he said to the media after the meeting. “We’re not asking them to forgive him or let him go, we just want them to let him live.”