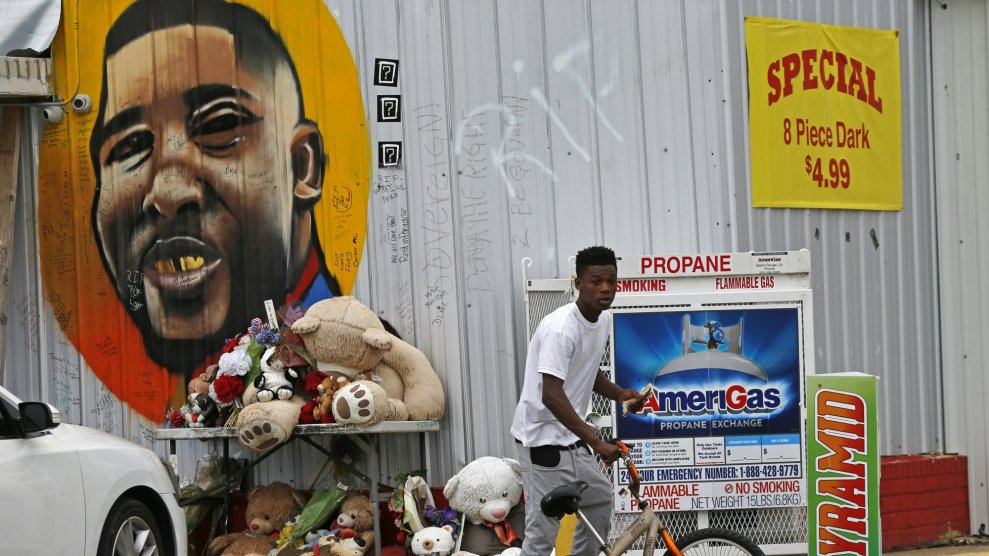 A boy rides his bike in front of a mural of Alton Sterling in Baton Rogue, Louisiana.Gerald Herbert/AP

Two Baton Rouge police officers involved in the high-profile shooting death of Alton Sterling will not face criminal charges, Louisiana Attorney General Jeff Landry announced Tuesday morning. Landry said that officer Blane Salamoni acted lawfully when he shot the 37-year-old Sterling in July 2016 and that officer Howie Lake, who was also involved in the incident, acted appropriately, as well. The announcement comes amid growing national outrage over the police killing of an unarmed black man in his own backyard in Sacramento, California, earlier this month. In the Sacramento case, two officers shot at the man, Stephon Clark, 20 times after apparently mistaking his cell phone for a gun, police have said.

JUST IN: Louisiana Attorney General says there will be NO criminal charges filed against the two officers involved in the fatal shooting of Alton Sterling.

Sterling, who was black, was shot after police responded to a call about a man with a gun outside a store. Officers arrived and encountered Sterling, and a confrontation ensued in the store’s parking lot. Video of the incident showed one officer use a Taser on Sterling and another tackle him to the ground. Salamoni’s decision to shoot Sterling in the back when he was already on the ground—followed by the police shooting of Philando Castile in a Minneapolis suburb days later—sparked national outrage and a new wave of Black Lives Matter protests during the summer of 2016.

“After a thorough and exhaustive review of the evidence…the Louisiana Department of Justice cannot proceed with a prosecution of either officer Lake or officer Salamoni,” Landry said Tuesday. “We came to this conclusion after countless hours of reviewing the evidence gathered and turned over to us by the US Department of Justice, including voluminous documents, many photographs, extensive video evidence, and again, after our own interviews of eye witnesses to the event.”

“Our investigation has concluded that officers Lake and Salamoni attempted to make a lawful arrest of Alton Sterling based upon probable cause,” Landry added. “During that encounter, Mr. Sterling continued to resist the officers’ attempts to arrest him.” Landry noted that investigators had determined that Sterling was armed and that he had more than one drug in his system at the time of the encounter.

Louisiana state law enforcement officials opened an investigation into Sterling’s death last spring after the US Department of Justice announced in May 2017 that it did not have enough evidence for a federal prosecution of the officers involved in the shooting. That decision was announced after President Donald Trump’s attorney general, Jeff Sessions, had taken over the DOJ. Sessions has long been an opponent of criminal justice reform, but notably, much of the Sterling investigation had been concluded under President Barack Obama, whose DOJ also rarely charged officers in police shooting incidents.