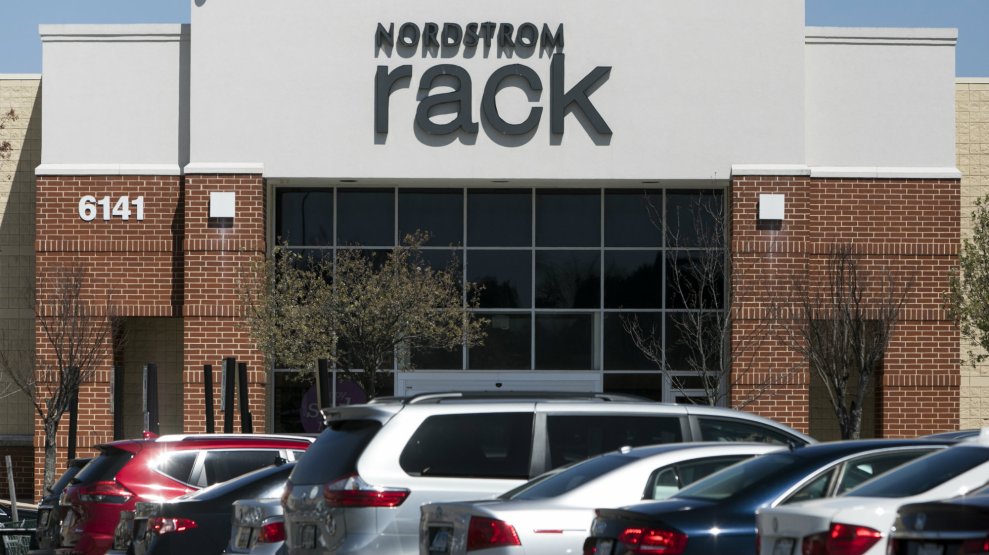 Danielle Stubblefield, 42, stood outside a Nordstrom Rack store feeling frustrated, desperately hoping to prevent what she believed was an instance of racial profiling from escalating. The police had been called on several black teenagers who had entered the store, but the kids had done nothing wrong.

Stubblefield, who is white and has biracial children (her husband is black), was standing near the front of the store with her daughter around 5 p.m. when she overheard a white security guard notify staff via walkie talkie that a group of kids was approaching. When she peered out the window she saw five black boys approaching from a distance—almost a block away: “I couldn’t pick out any of their faces. All you could see was that it was a group of teenagers walking toward the store. Having fun. No kind of suspicious behavior.”

“If they’ve trespassed, why were they even let in? I knew the whole thing was BS.”

The guard, Stubblefield deduced, had figured the boys to be potential criminals. When she asked him why he’d alerted the others, the guard refused to answer, so she asked him to see a manager. The guard walked away and she didn’t see him again.

Two boys from the group headed to another store and the other three entered Nordstrom Rack, at which point Stubblefield tracked down a manager and relayed what she had witnessed. The manager assured her the store had a policy against racial profiling, and said the guard was concerned because the kids had been previously banned from the store. “First of all, there was no way [the guard] could have picked out faces” from way down the street, Stubblefield recalled. “Second of all, if they’ve trespassed, why were they even let in? I knew the whole thing was b.s.”

Stubblefield’s hunch was right, according to DaVante Pressley, one of the boys. A few minutes after they entered the store, Pressley said, the boys noticed two security guards watching them closely—one at each end of the aisle they were browsing. The boys were looking for shoes for an event that night. When they noticed the guards, “I was like, ‘Excuse me? Why are you guys standing there?’ They said, ‘We’re doing our jobs.'”

One of the boys told the guards he thought they were watching them because they were black and the guards assumed they were going to steal, Pressley says. “They said, ‘You guys need to leave before we call the police.'” The boys insisted they were going to buy the shoes. They were moving toward the cash register when some police officers walked in—apparently, the cops had been called, Pressley said: “I’m like, ‘Aw man, here we go. Black teens, police officers nowadays—this is not gonna work.'” He and one of the other boys put down their shoes and headed toward the exit. Their other friend made his purchase.

All the boys stepped outside, along with the officers and several store officials, including the manager. Stubblefield joined them. “I started talking really loud,” she recalls. “I told them what I had witnessed and that the boys hadn’t done anything wrong. The cops were kind of standing there waiting to get orders from the manager.”

The teens were adamant they had never been banned from the store—in fact, they’d never even been to that Nordstrom Rack. The manager insisted store officials had seen them on camera in the past. “I said, ‘Pull the tapes,'” Pressley recalled. The manager eventually conceded that the boys had, in fact, not been banned from the store. But the guard who warned of their approach thought they had been, Stubblefield said.

“I was nervous because a lot of black teens are getting shot nowadays.”

To make matters more unsettling, when it became clear the teens were blameless, the manager began apologizing—to Stubblefield: “I had to tell her a couple times, ‘Look at them. Talk to them. Quit talking to me!’ It was 100 percent just her wanting to make sure that I was comfortable and that I wasn’t upset.”

The teens were allowed to leave, and Stubblefield drove them home. Each of the boys emailed Nordstrom Rack about the incident a few days later. None heard back, according to Pressley, who also says he also messaged the company on Twitter and got no response.

That April, the three teens shared their experience in a video (above) that Pressley and another boy produced for their high school communications class. The video attracted local media attention and spurred a TV news segment on racial profiling in Portland.

Stubblefield says she spoke to an official in Nordstrom Rack’s corporate office the week after the incident, who told her there had been a “theft ring” of people entering downtown Portland stores en masse and stealing merchandise. I tracked down some articles about “flash mob” thefts in Portland in 2011 and 2012—including one targeting a Nordstrom, Nordstrom Rack’s upscale sibling—but nothing since then. Nordstrom Rack did not respond to my questions about the 2016 incident.

“I was nervous because a lot of black teens are getting shot nowadays, and there were too many police there,” Pressley, who was 18 at the time, told me. There were three or four cop cars and two or three cops, he said, and he felt “embarrassed” when a crowd gathered to watch.

Stubblefield said she wasn’t surprised last week to hear about yet another group of teens being profiled at a different store location. “This happens every day,” she says.