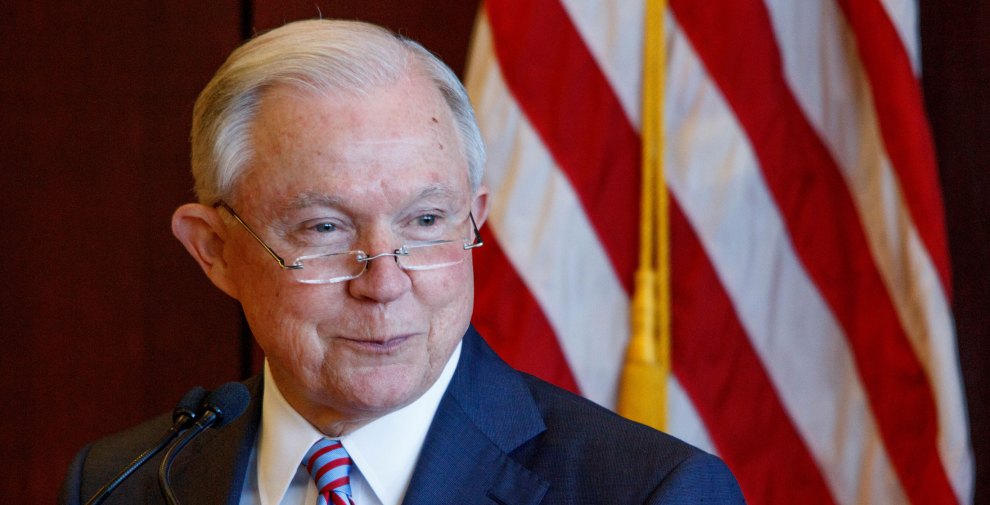 On Monday, US attorney general Jeff Sessions doubled down on the Trump Administration’s immigration policies during a speech to 1,000 school cops at the annual National Association of School Resource Officers conference in Reno, Nevada. After he praised school resource officers involved in recent shootings and lauded his department’s response to shootings, Sessions pivoted to focus on the administration’s immigration policies in the face of growing outrage.

“Children have indeed borne much of the burden from our broken immigration system,” Sessions said. “And the children you serve are too. They are watching as their friends and even their family members are getting involved in drugs and getting trapped in the funnel of addiction that is being fed by drug cartels taking advantage of our porous southern border.”

Sessions told the audience that refusing to prosecute adults who enter the country illegally “would be a disservice to the people of this country” and “an insult to those who come here legally.” He claimed that such a refusal would also “encourage more adults to bring more children illegally” and called the concept of having open borders “radical and dangerous.” (Later Monday, US Customs and Border Protection commissioner Kevin McAleenan said he had instructed Border Patrol agents to temporarily stop sending migrant adults for prosecution.)

“The compassionate thing to do is to protect our children from drugs and violence, put criminals in jail, and secure our borders,” Sessions told the crowd. By the end of his speech, Session received a standing ovation, according to a New York Times reporter in the room.

Although Sessions maintained that the administration would continue to prosecute adults who enter the country illegally, he said that the administration plans to “do everything in our power to avoid separating families.” Last Wednesday, President Donald Trump signed an executive order to end the administration’s policy of separating children who enter the country from their families, backing down from his “zero tolerance” policy. Sessions did not clarify what will happen to the more than 2,300 children who have already been taken into custody. Last week, Trump also ordered agencies to reunite those children with their families, though the status of that process is unclear.

Hundreds of protesters rallied outside of the Peppermill Resort where the conference was held, chanting “Jeff Sessions you can’t hide, Reno sees your ugly side!” In advance of Sessions’ address, a coalition of progressive groups in Nevada called on the National Association of School Resource Officers to rescind Sessions’ invitation. In a letter to NASRO, they wrote: “Rolling out the welcome mat to Sessions as your keynote speaker at this moment would demonstrate your complicity with his actions” in carrying out the administration’s “zero tolerance” policy toward immigrants. NASRO’s executive director Mo Canady told the Associated Press that Sessions, as the nation’s top law enforcement, had an important message to share with school resource officers “in the wake of recent, tragic shootings at several of the nation’s schools.”

Sessions also used his speech to emphasize that Congress must “fix” the country’s immigration system, referring to the Justice Department’s recent attempt to change a federal precedent that prevents the government from detaining immigrant children for more than 20 days.

“To have true compassion for our children, we must restore lawfulness to our immigration system and keep them safe,” Sessions told the crowd.

Sessions did at least begin his speech discussing school safety. He applauded the work of several school resource officers involved in school shootings this year and he praised the Justice Department’s response to high-profile mass shootings.

Sessions, who is part of the Federal Commission on School Safety led by Education Secretary Betsy DeVos, highlighted a recent hearing that featured conflicting testimony on the role of violent video games in school shootings. Sessions also pointed to the millions of dollars the Justice Department has allocated to firearm training for teachers, developing threat assessment systems for schools, and hiring more school resource officers as a point of pride. He congratulated Blaine Gaskill, a deputy who confronted a student who opened fire at a Maryland high school in March, and Mark Dallas, an officer in Dixon, Illinois credited with stopping a school shooting at his son’s high school.

But Sessions did spend most of his time at the microphone on border issues and his law-and-order philosophy.

Watch his speech below: