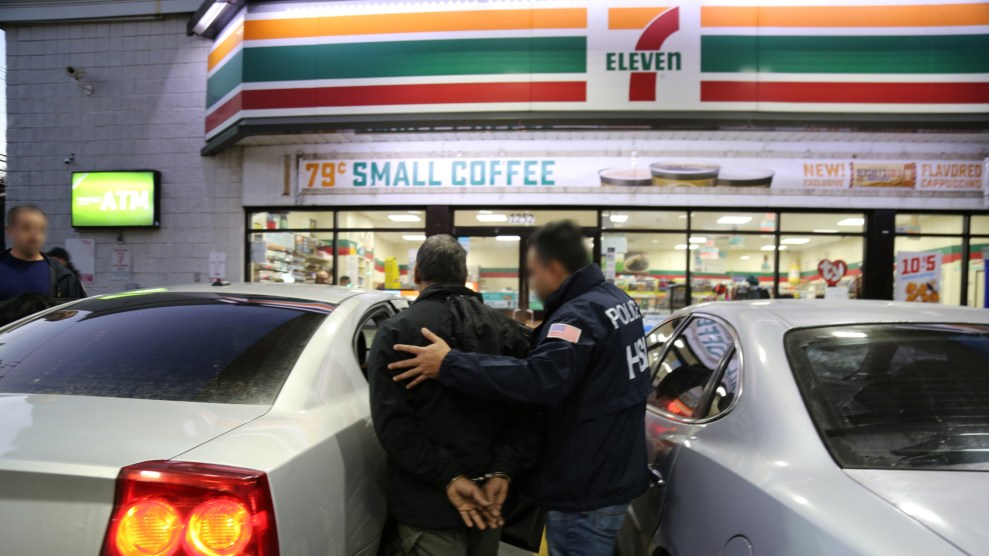 Homeland Security Special Agents raid 7-Eleven stores as part of the crackdown on undocumented immigrants by the Trump administration on January 10, 2018, in the New York City area.Charles Reed/Planet Pix/ZUMA Wire

President Donald Trump’s “zero tolerance” border policy isn’t the only way immigrant families have been torn apart by his administration—Immigration and Customs Enforcement is conducting massive raids on workplaces that employ undocumented workers in factories and stores from Ohio to Tennessee, leaving hundreds of children without their parents.

Advocates say they know of more than 250 children who lost at least one parent after the largest sweeps in April and June, but since there were 357 arrests total, there are likely more children who were affected.

Raids first became popular under Bill Clinton and continued with George W. Bush, who was under pressure from his Republican colleagues to be tougher on immigration as more people began to cross the border. The tactic stagnated under the Obama administration, which instead focused its efforts on auditing employers’ hiring practices to ensure they complied with federal law.

Now, the raids last seen in the mid-2000s are resurging under Trump. In January, ICE agents targeted nearly 100 7-Eleven convenience stores across the country, resulting in 21 arrests. In April, the agency took on a bigger target, raiding a meatpacking plant in Tennessee and arresting 97 undocumented immigrants. Last month, the feds made their way north to Ohio for two huge raids that collectively resulted in more than 250 arrests—one at a gardening company and another at a meatpacking plant, which was the biggest workplace raid since the Bush years, according to immigration experts.

Although some of those detained during workplace raids are quickly released, others are detained for weeks, even months, leaving their children behind.

Although some of those detained during workplace raids are quickly released on their own recognizance until their court date, others are detained for weeks or months, sometimes leaving children behind. Mark Heller, a senior attorney at Advocates for Basic Legal Equality, a nonprofit law firm in Ohio that is assisting families affected by the two June raids, told Mother Jones that the organization counted about 100 children who had one or both parents picked up in the gardening company raid. These children, most of whom are US citizens under the age of 10, were mostly taken in by other relatives if their primary caregivers weren’t immediately released—in one case, a babysitter cared for multiple children for an extended period of time. Jessica Ramos, another attorney at ABLE, said that although ICE sometimes releases women who have small children faster than other detainees, the practice is inconsistent. Ramos is not aware of any children who were taken into state custody after their parents were detained.

“[ICE] really doesn’t care and doesn’t make any type of arrangements to assist in caring for the children if they happen to arrest both sets of parents or if they are left without caretakers,” she told Mother Jones. “Immigration doesn’t call social services and say, ‘Hey, can you guys check up on these kids to make sure they’re not at home playing with fire?’ It’s up to the community and friends and family members to fill the gap.”

Heller said the bond hearings for those still detained from the gardening company sweep will begin this week—a month after the June 5 raid. Under the Obama administration, he said, most detainees would have gotten out on bond or been released on their own recognizance by this point. He said his office does not know how many of those arrested are currently detained because ICE has not released that information.

“ICE doesn’t take any proactive duty or responsibility to make sure children are cared for. When ICE does these workplace enforcements, the children are an afterthought.”

In Tennessee, at least 160 children had a parent arrested in the April raid, according to Stephanie Teatro, co-executive director of the Tennessee Immigrant and Refugee Rights Coalition, and more than 600 children missed school in the district in the days after the raid. Although the numbers are in flux, at the time of our interview, 7 of the 97 workers arrested agreed to a voluntary departure, 22 are still detained (almost three months after the raid), and 68 have been released. TIRRC is now hosting workshops to teach immigrant families about power of attorney and how to craft emergency custody documents, and Teatro said the workshops have been attended by nearly 400 families so far.

Unlike in Ohio, Teatro knows of only one case in which a child’s sole caregiver was detained, forcing him to move in with an aunt in another county. However, she said there are several cases in which a child’s sole caregiver—a single parent, for instance—is out on bond and facing deportation. Although it’s difficult to know how many—if any—children who lose their parents end up in foster care, advocates emphasized there isn’t a formal process in place to make sure kids have someone to take care of them.

And the raids will likely continue: In October, Acting ICE Director Thomas Homan (who retired this weekend) said he wants the agency to quadruple or possibly quintuple workplace enforcement actions this year. In May, ICE announced it had already doubled worksite enforcement investigations since 2017, so the agency is well on its way to hitting Homan’s benchmark. Meanwhile, advocates say, they’re anticipating that more and more families will be split up.

“ICE doesn’t take any proactive duty or responsibility to make sure children are cared for,” Ramos said. “When ICE does these workplace enforcements, the children are an afterthought.”