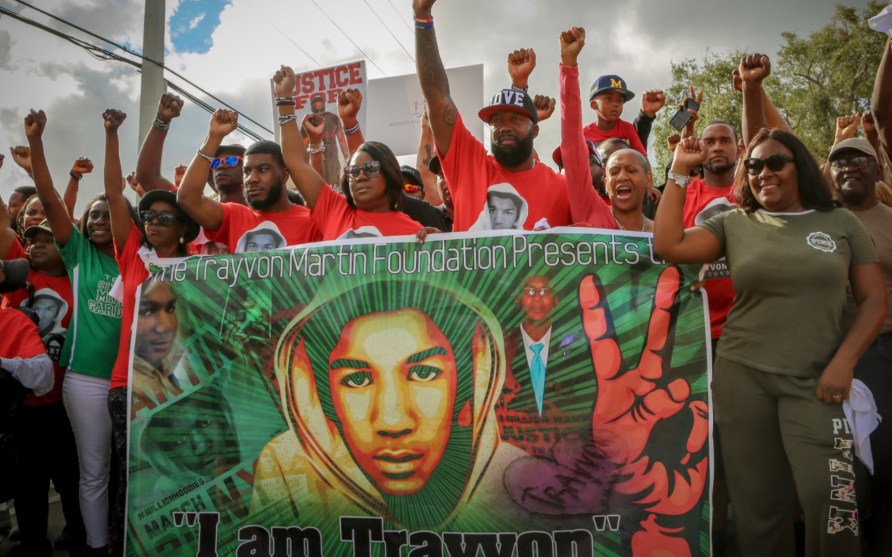 The parents of Trayvon Martin lead a march in honor of their late son./Paramount Network

On Monday, a new docuseries, Rest in Power: The Life and Legacy of Trayvon Martin, premieres on Paramount Network and BET. The six-part series is based on a book co-authored by the parents of Trayvon Martin, the black teenager whose fatal shooting by self-styled vigilante George Zimmerman in Florida in 2012 sparked national outrage. The series chronicles the shooting and subsequent trial, colored by Florida’s highly controversial Stand Your Ground law, and explores the case as an early precursor to the Black Lives Matter movement.

Featured prominently in the series is Benjamin Crump, the Florida-based civil rights attorney who represented Martin’s family in a civil lawsuit against the homeowners’ association that ran the neighborhood watch group headed by Zimmerman. (That case was settled for $1 million.) Since then, Crump has represented the families of victims in some of the most high-profile police-shooting cases in America, including Michael Brown in Ferguson, Missouri; Tamir Rice in Cleveland; and, most recently, the family of Stephon Clark in Sacramento.

Crump also represents the girlfriend and children of 28-year-old Markeis McGlockton, whose killing earlier this month by 47-year-old Michael Drejka has become the latest case to bring scrutiny to Florida’s Stand Your Ground law. McGlockton was killed in a convenience store parking lot in Clearwater, Florida, after confronting and shoving Drejka, who allegedly was accosting his girlfriend for parking in a handicap space. Police officials, citing Stand Your Ground, declined to arrest Drejka; local prosecutors have yet to determine if they will bring any charges.

I caught up with Crump to talk about the series on Martin, some recent instances of racial profiling and racist 911 calls that have drawn widespread attention, and Crump’s ongoing work to repeal Florida’s Stand Your Ground law.

Mother Jones: The Trayvon Martin case made national and international headlines. President Obama addressed it. It spawned congressional hearings on Stand Your Ground, and the organizing that happened after the shooting laid the foundation for what eventually became the Black Lives Matter movement. Six years later, what do you see as the legacy of that case?

Benjamin Crump: Trayvon was one of the most historical reference points that we’ve had in America in regards to race relations since Emmett Till. It’s that significant. For the first time in my life, the death of a black child made the cover of People, Time, Newsweek, Ebony—everything. Everybody knew Trayvon Martin’s name. We’re not talking about a singer or entertainer or actor or basketball player. This is an average black kid who was killed, and America cared about him. The world cared about him.

MJ: What do you think it showed in regard to race relations?

BC: How far America had come in race relations and how much further we had to go. Trayvon Martin showed very clearly that there was not equal justice in race relations in America, from the [Stand Your Ground] legislation to the [delayed] arrest to the criminal justice proceedings, the criminal justice system itself showed that black life was not valued or respected on an equal basis with white life in America. But it also showed that, when we said that his life mattered, people showed that they were willing to stand up. White and black people were standing up for Trayvon.

MJ: What do you think will be the impact of revisiting this saga for people who watch Rest in Power?

BC: It’s going to be very similar to watching O.J.: Made in America. People will be able to see just how differently we view things between black people and white people, things that are significant enough to bring us together, and what things still divide us. But what also is going to be very telling is to see how much we have in common. How we all love our children. And that’s what I tried to do with Trayvon. People say I made Trayvon a racial issue. Yeah, I did, because you had to speak truth to power. But also, you had to make Trayvon be what he was, and that was a teenage child. It doesn’t matter if you’re white, black, Asian or whatever—you love your children. And your children are children. None of them are perfect.

MJ: Several episodes of the series include a timely discussion of the fact that Zimmerman called the police habitually as neighborhood watch captain, often to report black people in his neighborhood, some of whom lived there. The Martin case often gets discussed within the context of Stand Your Ground, but do you think it also has more in common than people realize with more recent cases of racial profiling and racist 911 calls, like the #BBQBecky episode?

BC: Absolutely. What George Zimmerman was doing [repeatedly calling the police] was exposed when Trayvon was killed. But because we have video and cellphones now, you get to see that George Zimmerman wasn’t doing anything different than many other white people do. Now we just have evidence to show how ridiculous it is.

MJ: Do you see Zimmerman as a #BBQBecky of sorts?

BC: Absolutely. He called the police on 10-year-old kids playing in the street. How absurd is that?

MJ: When I heard about Zimmerman’s dozens of calls to police, I thought about the white family in Cleveland that called the police on the black kid mowing grass, that had called the police more than 50 times in 18 years.

MJ: Trayvon wasn’t killed by a police officer, but do you think his death still influenced the current conversation about race and policing?

BC: Absolutely. Because Zimmerman saw himself as a quasi-police officer, an authoritative figure. And I think what made [black] people lose their minds about Trayvon’s case was that we had unfortunately become normalized to the police killing us. But now, George Zimmerman and the Stand Your Ground law, you had regular white people be able to kill us and not be held accountable. And I think people were like, “This is just way too much.”

MJ: Today, in the era of Black Lives Matter, after several years of discourse around race in America, do you think many white Americans would process the Martin case differently than they did in 2012?

BC: I think Trayvon in and of itself makes you see it differently when you look at Zimmerman and everything that he has done since, you start to reanalyze what your preconceived notions were about Trayvon and Zimmerman. So with the benefit of hindsight, I think many white people would say, ‘Maybe we were wrong about this. This kid could have just been walking home, talking on the phone, minding his business.’ But what Donald Trump has done in America has made others say it’s okay to not give people of color the benefit of the doubt and the benefit of consideration, and I think that they would have accepted the narrative that Trayvon Martin was up to no good, just like George Zimmerman said he was.

MJ: Now you’re representing the girlfriend and children of Markeis McGlockton. Does that feel like deja vu for you?

BC: To some degree. It’s so ironic that this docuseries starts on Monday, and they’ll be having rallies on Wednesday in Clearwater, Florida, protesting this Stand Your Ground murder yet again. The similarities are alarming. Just like Trayvon’s killer, [Drejka] was the initial aggressor and then killed an unarmed black person, and then says he was doing it in self-defense. And just like Zimmerman, he went home and slept in his bed that night.

MJ: Last year, Florida amended its Stand Your Ground law to require the state to disprove self-defense instead of requiring the defendant to prove that they feared for their life when they used deadly force. What do you think the consequence of that will be?

BC: More people will get away with murder. Many prosecutors won’t prosecute, saying the burden is too high for us to disprove this Stand Your Ground claim. You have to figure out how to prove in somebody’s mind what they were thinking. It’s a legal falsity. It’s almost impossible. It should just be, ‘We don’t think this is self-defense, objectively. It doesn’t add up.’ But now you have to prove the person’s [alleged] subjective fear was not what he was thinking.

MJ: You’re still working to repeal the Stand Your Ground law in Florida. Especially given the recent change in the law, do those efforts ever seem futile?

BC: I’m cautiously optimistic that we’ll be able to use Markeis McGlockton’s case, if not to overturn Stand Your Ground or amend it, that we will be able to make the state at least pass a gun responsibility law to balance out all these gun rights laws. Chiefly, you can’t be the initial aggressor and then claim Stand Your Ground. We’ve been working on it for a while. Trayvon’s parents, Moms Against Guns, all of us are working in a coalition to get rid of this racist law. There are some things that can be done that don’t make them feel like their losing their Second Amendment rights but still can be fair.

MJ: Why do you think the McGlockton case is the one?

BC: I think [the image of] that little boy reaching out for his father, and the emotional impact for him. Many people are going to see that video and get emotional. It’s going to be a lighting rod of a case.