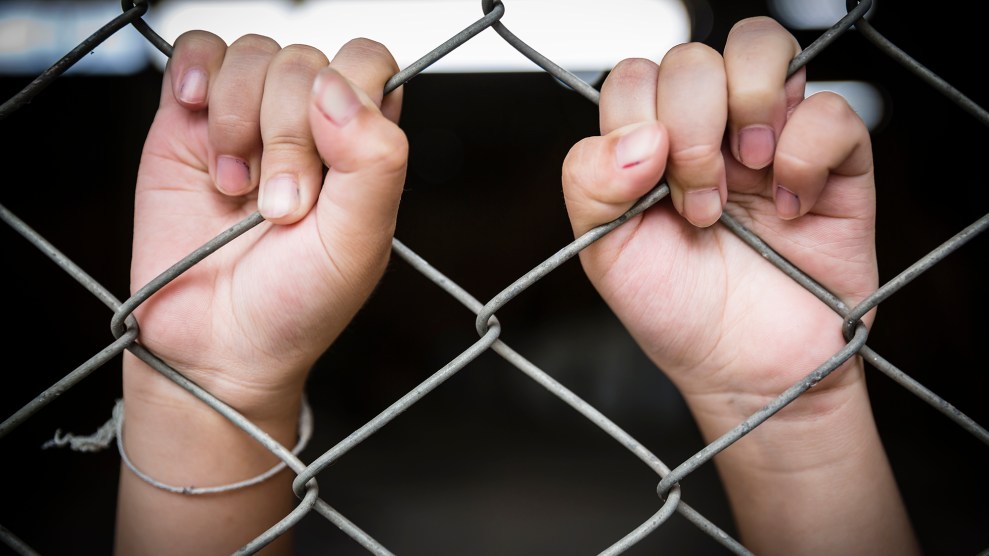 By the time he turned 15, Jesus G. was hearing voices and having suicidal thoughts. It was early 2013, and he’d been living at the Central Juvenile Hall in Los Angeles for more than a year, though he’d never been tried or found guilty of a crime.

In late 2011, Jesus’ younger brother accused him of molesting him, but Jesus denied the allegations. The clock stopped on his case months after that, when a doctor decided that, due to his hallucinations and immaturity, he wouldn’t understand what was happening in court.

As with adults, when a kid like Jesus is declared incompetent to stand trial, the state can detain him while trying to improve his mental functioning and knowledge of court procedures. But while California law limits the amount of time adults can be confined—often in hospitals—during this process, no such cap exists for children, who are regularly held in juvenile hall instead. As the months passed, Jesus and his attorneys wondered when he would ever get out.

In one egregious case, children were asked to watch episodes of Law & Order to prepare for their trials.

In California and across much of the country, children with cognitive problems routinely languish in custody for months or years while judges determine whether they’ll be able to pick up the skills needed for a fair trial. Most states don’t have comprehensive programs to help these kids become “competent,” as the courts call it, referring to someone who has the ability to assist their attorney with their defense and possesses a solid understanding of the charges and proceedings against them. In one egregious case, according to a legal director at the National Juvenile Defender Center, children were asked to watch episodes of Law & Order to prepare for their trials.

According to California Assembly member Mark Stone, about 300 of the estimated 7,000 wards in California’s juvenile justice system last year were not getting the help they needed to become competent for trial. Now, lawmakers in Sacramento are considering a bill that would limit how long kids are detained after a judge finds them mentally unfit. And it would spell out the services they can receive to get up to speed. Gov. Jerry Brown vetoed a similar bill last year after critics protested that dangerous, emotionally unstable teens might be let loose.

But this year Stone hopes a compromise will be more palatable: In his new bill, most kids could be detained six months while trying to become mentally competent, but those accused of certain violent crimes could be held for 18 months. Some advocates say a year and a half is still far too long to hold a child without trial, but others say it’s a step in the right direction for a system that often feels haphazard at best and an absolute mess at worst.

Before he got to juvenile hall, Jesus was struggling at home. He’d recently moved to California with his mom and told adults at school he was depressed and wanted to die; he tried cutting his wrist because he claimed his stepdad abused him. At age 14, after he was locked up, a medical examiner found he was functioning in some ways like a six-year-old. “For him to understand the reality of what’s transpiring and understand the process, what people are doing with him and what he needs to do in his own defense…those are going to be difficult things for him,” the doctor told the court.

The fight for better juvenile competency laws has roots back in the 1990s. Across the country, a jump in homicides led to a superpredator panic, and delinquent teens were depicted as dangerous criminals. New laws made it easier for them to be transferred to the adult system, where a third strike could land them in prison for life.

By then, courts already had procedures for dealing with adults who weren’t mentally fit for trial, and many states started to apply the same standards to children. But that hasn’t worked out well, says Thomas Grisso, a psychologist in Massachusetts and a leading expert on these issues. Like adults, kids can struggle to understand court proceedings because of a mental illness or an intellectual disability. But many kids aren’t ready for trial simply because they’re immature. Their brains haven’t developed fully, or they haven’t picked up the average knowledge an adult would have about courts, Grisso says, so they require different types of services to get up to speed.

California does have a separate competency law for juveniles, and back in 2007 it was the first state to acknowledge that immaturity could make someone unfit for court. But since then it has lagged behind. “California ended up with one foot moving forward and the other one stuck in the mud,” says Janet Warren, a psychiatry professor at the University of Virginia who helped develop procedures in her state for juvenile competency that are now hailed as a model.

“Because there’s no other place to house them, we end up with these minors in juvenile hall. They really should be in some other place.”

National guidelines written by Grisso and his colleague Kimberly Larson encourage lawmakers to keep kids in the least restrictive environment possible while they study to become competent—ideally at home. In California, however, “juvenile halls have become an unfortunate default holding place for incompetent youth,” public defenders in Los Angeles wrote in an amicus brief, noting that the state doesn’t use residential group homes enough. And California has no hospital beds for these kids, says Jim Salio, president of the Chief Probation Officers of California. “Because there’s no other place to house them, we end up with these minors in juvenile hall. They really should be in some other place.”

Experts recognize that locking them up can worsen their mental health problems, make them less likely to graduate high school, and boost their odds of committing crimes later. In 1972, the Supreme Court ruled it was unconstitutional to detain anyone indefinitely during treatment for competency problems; a person could not be “held more than the reasonable period of time,” the justices wrote. But what’s reasonable? In California, Salio says, some teens are held two or three years.

According to a study in Virginia, most kids can develop the skills needed for trial within three months by studying court procedures with an expert and receiving treatment for any mental health problems if needed. After six months, if a child has not become competent, it’s unlikely he ever will.

During his year-plus at juvenile hall, Jesus continued his schooling but received no services to prepare him for trial, his attorneys told the court, including no ongoing treatment to deal with his hallucinations, depression, and suicidal thoughts. The probation office explained a committee focused on competency programming was still “in the planning stages” and that Jesus probably couldn’t start until the following year.

Albert C., a 15-year-old accused of assault and gun possession, was also locked up in Los Angeles after a judge found him unfit for trial. His programming, according to an amicus brief, involved just 90 minutes a week of going over worksheets with court vocabulary, followed by a quiz. The person who administered the worksheets hadn’t graduated from college or received much training. “He was essentially warehoused for a year with no therapeutic services or treatment,” wrote the Pacific Juvenile Defender Center and local public defenders, noting that doctors recommended he take medicine for attention deficit hyperactivity disorder.

It doesn’t have to be that way. In Virginia, most kids with cognitive problems stay at home while they prepare for their trials. The state has hundreds of trained forensic evaluators who meet with them there a few times a week, typically over three to four months, using an individualized curriculum with interactive animated software, flashcards, workbooks, coloring books, board games, verbal conversation, and role playing. Florida, Louisiana, and Maryland also have comprehensive, state-wide programs for incompetent kids. But some states like California face pressure to spend their money on more hospital beds for the growing number of incompetent adults left languishing in jails. “To put juvenile competence as a financial burden on top of that makes me pessimistic about a lot of states suddenly getting on board,” Grisso says.

Jesus was held in juvenile hall for about 16 months before he was finally released.

Virginia experts counter that it’s cheaper to do it their way. Warren estimates children in her state become fit for trial at a cost of about $5,000 each, while it takes $200 a day to detain a kid in juvenile hall and $600 a day to keep someone in a psychiatric facility. In other words, a few months of treatment and education could cost three and a half times more in juvie than at a kid’s home.

Jesus and Albert both fought their pretrial detention. Neither kid had much luck. Jesus was held in juvenile hall for about 16 months before he was finally released. Albert stayed for about a year until a judge declared him competent and and he pleaded guilty to his crimes. In his case, a judge ruled that although local protocols suggested kids shouldn’t be held for more than about four months during competency treatment, that didn’t carry the force of law in California.

Last year, the California Legislature passed a bill that would have put a six-month cap into law, with support from the Chief Probation Officers of California, but the governor vetoed it amid concerns that kids with aggressive behavior would get out of custody too soon. Assembly member Stone tried to put more teeth into the bill this year, with a six-month cap for most kids and an 18-month cap for those accused of certain violent crimes, including murder and rape as well as certain acts of sexual abuse, like the ones Jesus was accused of.

“The kid has had no childhood.”

The new bill would lay out the types of services that courts could consider for incompetent kids, things like therapy and medication instead of just workbooks with court vocabulary. And it would encourage courts to look for options besides juvenile hall while still considering public safety, and require them to dismiss the cases of incompetent kids who are only accused of misdemeanors. Lawmakers have until Friday to vote on the proposal.

In the meantime, children are waiting. Dale Major, an attorney in San Francisco, says one of his teen clients has spent about three years locked up without trial, spread out over multiple arrests, after being declared incompetent because of post-traumatic stress disorder, paranoia, attention deficit disorder, and developmental immaturity. “Even though he’s in juvenile court, he’s now 18, sitting in a county jail, getting no services,” he says. “The kid has had no childhood.”