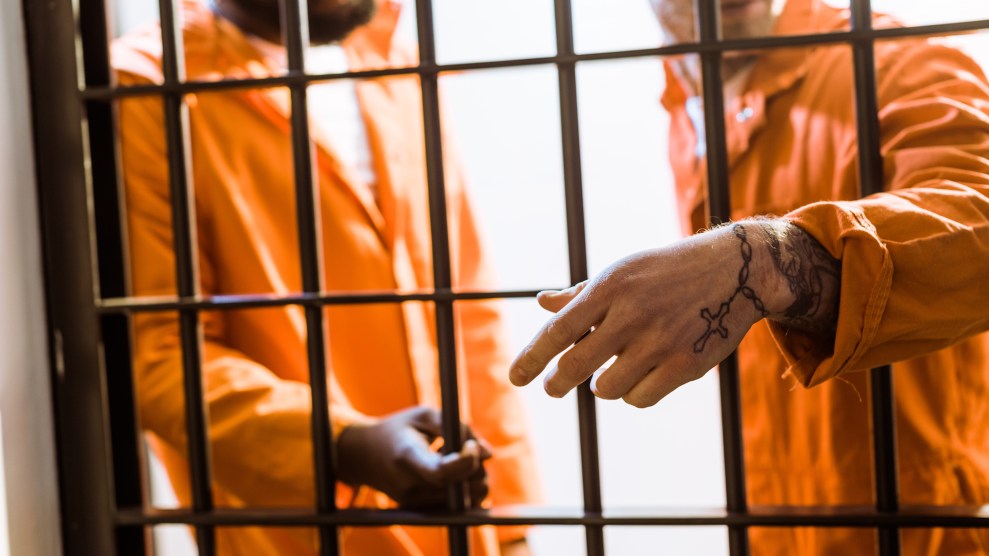 For weeks, the outside organizers of the nationwide prison strike that kicked off last Tuesday had been spreading the word that inmates in at least 17 states had pledged to protest prison conditions over 19 days. The plan was for thousands of prisoners to resist however they could—by refusing to work, turning away meals, or staging sit-ins. Yet in the week since the strike began, details about it have proved nearly impossible to confirm through official channels, with corrections officials almost uniformly denying that any protests or disruptions are underway.

Only three state prison systems would acknowledge strike-related incidents to Mother Jones. In North Carolina, dozens of inmates in the Hyde Correctional Institution unfurled makeshift banners calling for “better food,” “parole,” and “solidarity” last Monday. Matthew Jenkins, a spokesperson for the state’s Department of Public Safety, confirmed that the protest occurred. The next day, 18 prisoners from Nevada housed in an Arizona private prison started to refuse meals to protest visitation rules, solitary confinement, problems receiving work credits toward early release, and threatening interactions with guards, according to the Nevada ACLU. Two days later, the hunger strike was over, claims Brooke Santina, a spokeswoman for the Nevada Department of Corrections. “It was more of a fast,” she says. “I think they realized that what they were complaining about was already being taken care of.” On Wednesday, Ike Randolph of the Indiana Department of Correction confirmed that seven prisoners at Wabash Valley Correctional Facility began a hunger strike on August 27 and that two remained on strike.

Spokespeople for prison systems in Alabama, California, Florida, Oregon, Michigan, Mississippi, Texas, and Washington say they have had no reports of prisoners participating in the strike. “We’ve been aware of all these outside agitating groups that have been trying to instigate our prisoners,” said Chris Gautz, who represents the Michigan Department of Corrections. “Thankfully they haven’t listened.”

The strike’s organizers on the outside scoff at these denials. The Incarcerated Workers Organizing Committee (IWOC), the main outside group supporting the strike, says that “thousands” of prisoners are participating. “Prison authorities may prove successful in concealing or even deterring participation in some of those states,” IWOC and other organizers stated, “but they cannot refute the righteousness of the 10 prisoner demands,” referring to the strikers’ demands, which include improving living conditions, ending racially biased sentencing and parole decisions, and increasing access to rehabilitation.

Despite the near-blanket denials from officials, reports of protests inside prisons have trickled out anyway. Vicky Waters, press secretary for the California Department of Corrections and Rehabilitation, said no inmates were striking, but she couldn’t answer questions about a video posted on Twitter that appears to show a prisoner in Sacramento refusing a meal. (“Burritos or not, I’m not eating today,” he tells a guard through an open slot in his cell door. “I’m hunger-striking.”) In Alabama, a prisoner who goes by the name Swift Justice called into an Al Jazeera webcast to demand an end to what he termed “slavery”—the practice of paying inmates very little or no money for prison jobs.

A communications director for Immigration and Customs Enforcement denied a “rumor” that immigration detainees in the Northwest Detention Center in Washington state were participating in a hunger strike in solidarity with the striking prisoners. Yet Maru Mora Villalpando, an activist in Tacoma, says she received calls late last week from people in at least three units at the detention center who said about 60 detainees were still refusing meals, and that some are continuing to hunger strike this week.

Corrections departments in Georgia, Louisiana, Ohio, and New Mexico, where organizers have spread word of strike activity, did not return calls or emails for comment.

Karen Smith, secretary of the Gainesville, Florida, chapter of IWOC, says prison officials are deliberately covering up the strike. “You could be staring at a blue wall and they’ll tell you it’s red,” she says. “They can’t have other prisoners hearing this is a thing in their massive prison state.” Smith says she has received information from a member of Jailhouse Lawyers Speak, the anonymous group of imprisoned activists who called for this year’s strike. She lists five Florida prisons where she’s heard that between 170 and 210 prisoners are refusing to work. About 100 people in Charlotte Correctional Institution outside of Fort Myers were boycotting the prison commissary, she adds.

Still, outside organizers have struggled to communicate with the strikers, who they say face the threat of retaliation for even talking about the protest. Smith says her group gets information about which prisons are locked down, possibly in response to protests, by calling facilities and pretending to be girlfriends or family members asking whether visitation is allowed. She says at least four Florida prisons were locked down during the first week of the strike, while Florida DOC spokesman Patrick Manderfield says just one was locked down for part of the week due to a “contraband discovery.”

“People need to understand that the tactics being used in this strike are not always visible,” outside organizers said in a statement last week. “Departments of Corrections are not reliable sources of information for these actions and will deny them and seek to repress those who are engaged in them.”

No matter how many prisoners are actually protesting behind bars, the strike is still meeting at least one of its goals: “punching” prisoners’ complaints into the national agenda, as IWOC organizer Brooke Terpstra put it. The New York Times, NPR, USA Today, and Time magazine have covered the strike, particularly its demands for better living conditions and wages.

The organizers have also met another objective—gaining the support of mainstream progressive groups, including the ACLU and the Vera Institute of Justice, a think tank that promotes criminal justice reform. Even a few politicians have jumped on board, including Rep. Ro Khanna (D-Calif.), who tweeted that he endorsed the strike because “inmates are exploited for cheap labor” rather than rehabilitated. Last week, Chris Johnson, a candidate for Delaware attorney general, released a video talking about his support.

The strike’s other goal, according to Terpstra, is to promote ceasefires between prison gangs. It’s still unclear whether the protests have accomplished anything on this front. On Tuesday, strike organizers alluded to continuing “prisoner-on-prisoner violence.”

The prison strike is scheduled to continue until September 9, the 47th anniversary of the Attica prison riot. Whatever is happening inside prison walls, the strike’s outside organizers have already deemed it an “unparalleled success” for incarcerated activists. “Prisoner demands have permeated the mainstream conversation,” the organizers said in a statement on Tuesday. “They are taking their rightful place at the table.”