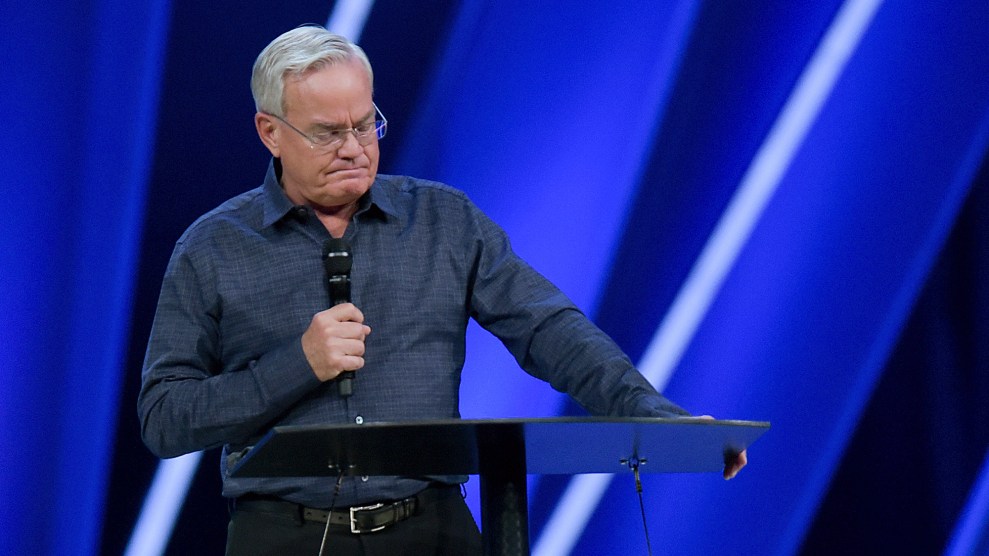 Earlier this week, in what is the most significant response to sexual abuse allegations in an evangelical church since the start of the #ChurchToo movement—or, arguably, ever—the lead pastor and the entire board of elders of Willow Creek Community Church, a deeply influential nondenominational megachurch in the Chicago suburbs, resigned in front of their congregation.

The moves, which happened in a special congregational meeting Wednesday night, were in response to allegations of sexual abuse and harassment against the church’s founding pastor, Bill Hybels, and to the ways the church had essentially turned a blind eye for nearly five years. In the meeting this week, lead pastor Heather Larson announced to thousands of congregants—Willow Creek is home to some 25,000 members, making it the fifth-largest megachurch in the country—that she would resign immediately, and Missy Rasmussen, an elder, announced that she and eight of her peers were stepping down because, she said, “Willow needs and deserves a fresh start.” Rasmussen apologized to each of the women who reported misconduct.

“To all the women who have come forward, we are sorry that we added to your pain,” Rasmusssen said. “We are sorry that our initial statements were so insensitive, defensive, and reflexively protective of Bill. We exhort Bill to acknowledge his sin and publicly apologize.”

Hybels has been publicly accused by multiple women of sexual abuse and harassment over the past several months, with some sharing their stories in the Chicago Tribune and Christianity Today. But still, after the stories were published in March, Hybels’ position as something of an evangelical superstar—he’s written several books about Christian leadership, was a spiritual adviser to President Bill Clinton, and created the high-profile two-day Christian confab, the Global Leadership Conference—largely continued without serious challenge from church leadership. And this was not the first time allegations were brought against Hybels; internal inquiries into his behavior actually began about four years ago.

Finally in April, the church launched a new investigation into allegations brought by at least seven women, though at the time, the elders and the church’s two lead pastors, including Larson, stood by Hybels as he appeared in front of the congregation to deny the allegations, for which he received a standing ovation. That same month, Hybels was allowed to retire, seemingly on his own terms, just six months early from planned retirement.

Then, on Sunday, things started to shift. The New York Times reported that Hybel’s former executive assistant, Pam Baranowski, was alleging that the pastor emotionally abused her, groped her, and demanded oral sex from her once while she was living in his home in the 1980s. Following that report, Willow Creek Community Church announced plans to conduct an independent investigation into Hybels’ misconduct and has said it’s engaged “an outside, independent governance expert to conduct a robust governance review.”

Then, the same day as the Times report, one of the lead pastors who succeeded Hybels resigned and, according to the Times, was so disturbed by the allegations that he vomited backstage before services.

The elders and Larson followed his footsteps this week, upending most of the church’s leadership.

This has all added up to the most serious and arguably the most significant reaction in the reckoning over sexual abuse in evangelical churches. Over the past eight or so months, in parallel with the broader #MeToo movement, women have begun sharing their stories of abuse in evangelical churches with the #ChurchToo hashtag, which I wrote about back in May. A handful of these allegations dealt with incredibly powerful pastors who had previously been untouchable. And, as I wrote then, while the church was finally being forced to deal with something that was a long time coming, these all-powerful men were only starting to see consequences. And it still seemed that something like what happened this week at Willow Creek was impossible.

For contrast, consider another case against such a high-profile man. Memphis megachurch pastor Andy Savage was accused of sexually assaulting a teenager named Jules Woodson in his youth group, and it took nearly four months for Savage to announce his resignation from Highpoint Church, which he did in March (although he was on leave for much of that time as an investigation was underway). Chris Conlee, Highpoint’s lead pastor, did not resign until last month. And Woodson told me via Twitter direct message this week that so far, two of the three pastors who knew about her assault have stepped down. In his final Sunday at Highpoint, Conlee did not address the allegations and was given a standing ovation by his congregation, reminiscent of the one in honor of Savage on the day he stood before the church and confessed his sin against Woodson. The church has downsized from three campuses to two, but it has largely avoided further addressing the Savage case beyond the statements put out in March. Sure, there were two high-profile resignations, but ultimately the larger church business continued as usual. And while the church issued a statement that said it was committed to developing a better process for victims of sexual abuse, it’s unclear if that has translated to any real action.

And that’s why Willow Creek is such a huge deal. By comparison, the behavior of its leadership seems extraordinarily proactive—even if the bar is low—and it seems almost certain this will set a strong precedent that would have been unimaginable a year ago. This is the first time in the evangelical reckoning that all of the leadership at the very top of an institution has resigned and publicly taken responsibility to this degree. Megachurches, which are often nondenominational, don’t tend to have strong checks and balances systems in place. A board or a team of elders is the main form of a power check on a celebrity pastor, but oftentimes, especially when there isn’t an additional denominational governance, that board seems more dedicated to the man who brings in thousands of worshippers and hefty donations than the word of a few congregants.

All that said, it’s still hard to imagine this church, or future churches where sexual abuse is reported, will do much to grapple with the deeper cultural factors that often contribute to an environment that’s ripe for abuse. As I’ve written before, strict gender roles, the value that is placed on sexual purity for women in particular, and the godly celebrity afforded to many of these often white, often male megachurch preachers all contribute to the problem that reaches well beyond Highpoint and Willow Creek.

In extraordinarily bad timing, the Hybels-founded Global Leadership Conference began Thursday morning, drawing thousands to the church campus. And despite the strong response from the church itself, the Willow Creek Association (WCA), the affiliated nonprofit that runs the conference, has not made any apparent moves to change its leadership. The event has long drawn big mainstream names, like Sheryl Sandberg, Bono, and Tony Blair, and was traditionally a showcase for Hybels, who served as chair of WCA until his resignation in April.

But Thursday morning, WCA president Tom De Vries emphasized in opening remarks that WCA and the Willow Creek church are “two distinct organizations with separate boards, separate staffs, separate budgets, and unique missions” but said, “We’ve tried to support each other in the midst of this unique situation as best we could.” DeVries assured attendees that there is no path for Hybels to return to his position with either organization and apologized for the shortcomings in Willow Creek’s initial response. His speech was carefully focused on WCA’s broad failures and its future endeavors to make amends, but he did not outright condemn Hybels’ behavior. The WCA board’s chairman is Dick DeVos, husband of education secretary Betsy DeVos, who, according to the Chicago Tribune, this week wrote to churches that had agreed to be host sites for the conference that “there is no question that Bill has had a significant impact on this ministry, but the Summit has never been about one person.”