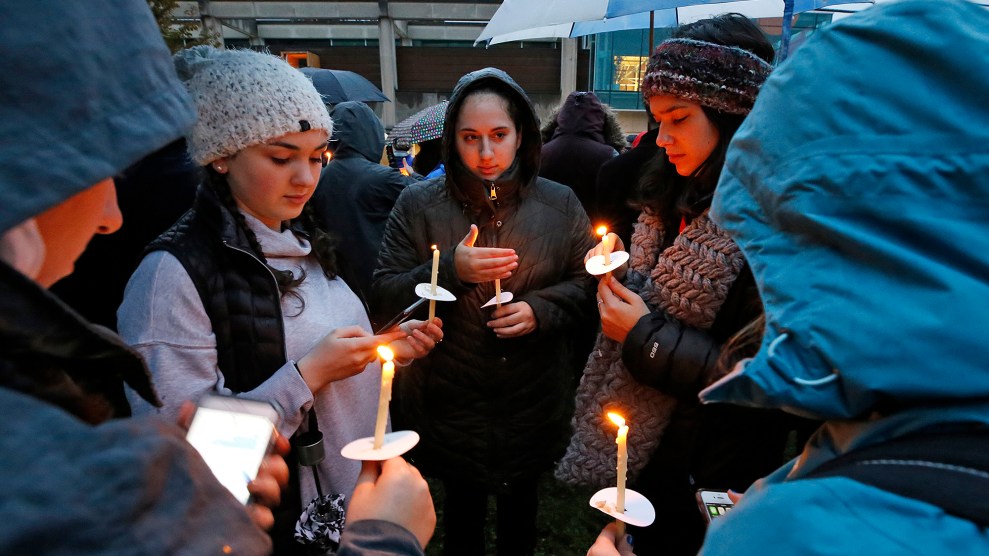 A memorial vigil in Pittsburgh Saturday night for the victims of the shooting at the Tree of Life Synagogue.Gene J. Puskar/AP

At a press conference Sunday morning, federal officials announced new details about the deadly shooting at Pittsburgh’s Tree of Life Synagogue Saturday morning. They said the accused gunman Roberts Bowers killed 11 people, ranging from 54 to 97 years old. The victims included a 97-year-old Holocaust survivor, a pair of brothers, and a husband and wife.

These were the Tree of Life synagogue victims:

The attack is being treated as a hate crime, and Bowers will make his first appearance in court Monday to face 29 federal charges. Scott Brady, the US Attorney for the Western District of Pennsylvania, said Bowers “made statements about genocide and his desire to kill Jewish people.” According to the criminal complaint, Bowers said during his deadly attack “They’re committing genocide to my people. I just want to kill Jews.”

Bowers’ social media posts indicate he blamed Jewish organizations, specifically the Hebrew Immigrant Aid Society (HIAS), for helping to bring refugees to the US. He frequently posted about the migrant “caravan” from Central America that Donald Trump and conservative news outlets have repeatedly highlighted as bringing “an onslaught of illegal aliens” in recent weeks. Yesterday, just before he entered the synagogue, Bowers wrote on the social network Gab, which hosts extremist right-wing views, “HIAS likes to bring invaders in that kill our people. I can’t sit by and watch my people get slaughtered. Screw your optics, I’m going in.”

The Pittsburgh shooting has reignited the national debate over gun control. Donald Trump said on Saturday that the shooting could have been prevented with armed guards at the synagogue and dismissed the need for stricter gun laws. At the press conference on Sunday, Pittsburgh Mayor Bill Peduto, rejected his dismissal, saying, “I think the approach we need to be looking at is how we can take the guns, which is the common denominator of every mass shooting in America, out of those that are looking to express hatred and murder.”

Trump held a campaign rally on Saturday night in southern Illinois, where he said “this evil anti-Semitic attack is an assault on all of us,” and then ended the night by tweeting about the flawed managerial decisions of the Los Angeles Dodgers in the World Series.

Watching the Dodgers/Red Sox final innings. It is amazing how a manager takes out a pitcher who is loose & dominating through almost 7 innings, Rich Hill of Dodgers, and brings in nervous reliever(s) who get shellacked. 4 run lead gone. Managers do it all the time, big mistake!