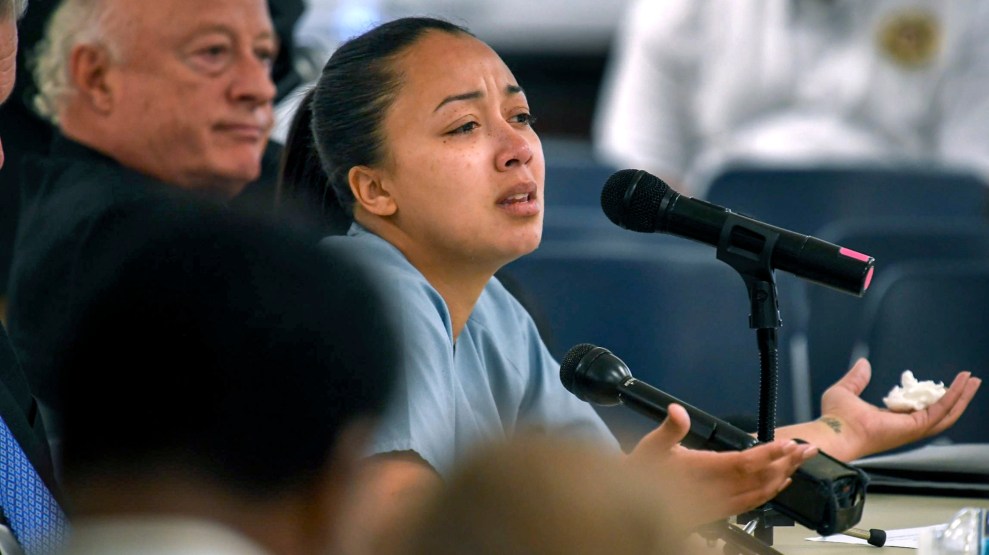 Cyntoia Brown appears in court during her clemency hearing in May.Lacy Atkins/The Tennessean/AP

Cyntoia Brown, a sex trafficking victim serving a life sentence in Tennessee for killing a man when she was 16, will walk free this summer after spending over a decade incarcerated. The yearslong effort by criminal justice activists and victim advocates to obtain clemency for Brown, who killed a man soliciting her for sex, finally came to fruition Monday, when Gov. Bill Haslam ordered Brown be released on August 7.

“Cyntoia Brown committed, by her own admission, a horrific crime at the age of 16,” Haslam, a Republican, said in a statement. “Transformation should be accompanied by hope. So, I am commuting Ms. Brown’s sentence, subject to certain conditions.”

In advocating clemency, Brown’s supporters noted her pursuit of education while in prison. She got her GED and a degree from a local university. Brown’s quest for clemency became a cause célèbre for celebrities like Rihanna, Kim Kardashian West, and LeBron James. Activists and others reacted to the news of her clemency on social media:

Incredible news. Many people worked long and hard to make this happen. Shout-out especially to @BLM_Nashville @prisonculture and many more. https://t.co/mNcgFVuLrK @WomensMarchTN

Over the past few weeks, more people have rallied around Cyntoia's case and I think that's really terrific. Grateful to all of those who wrote letters, made calls, kept her name in the press. ALSO, people in TN have been organizing around her case since at least 2008.

In a statement, Brown, now 30, said she hopes to use her newfound freedom to “help other young girls avoid ending up where I have been.”

“With God’s help, I am committed to live the rest of my life helping others, especially young people,” she said.

Had Haslam not intervened, Brown would have been in prison until she was at least 69, when she would have been eligible for parole. Brown’s release requires that she remain on parole for 10 years, complete 50 hours of community service, receive counseling, and find a job. When she’s released, she’ll have served 15 years in prison.

The push for Brown’s release has been especially intense in the past few weeks as Haslam’s governorship comes to a close; fellow Republican Bill Lee assumes office January 19. Groups on the ground like Black Lives Matter Nashville phone-banked and urged other state politicians to support clemency in an effort to sway the outgoing governor. In an interview with Mother Jones last month, BLM Nashville organizer Martaze Gaines said although clemency for Brown was the primary goal, justice would ultimately require a “dismantling” of the prison system, especially lengthy sentences for crimes committed by juveniles.

“We are really trying to reimagine a new future without these forms of punishment,” he said. “They don’t really do anything to restore a person. When we think about these [sentences] of 51 years, especially for those who were minors, it takes away the humanity they have inherently by birth.”