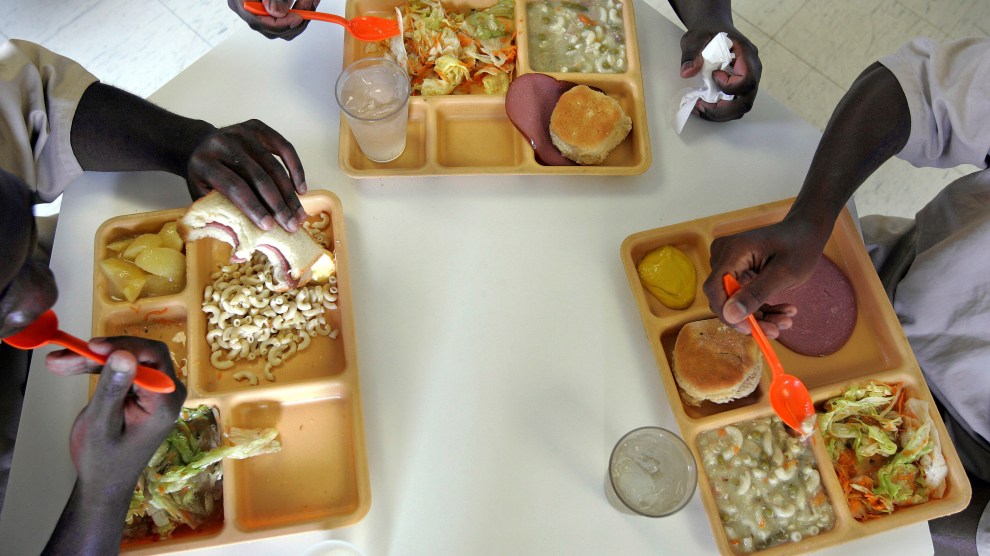 On Christmas Day, federal inmates were served holiday meals by prison employees, as happens each year. But this year, because correctional officers are working without pay due to the ongoing government shutdown, it made headlines.

Late last week, USA Today published the complaints of disgruntled prison guards who wrote to the newspaper to gripe that the inmates were “laughing” at the guards during their holiday meals for working without a guaranteed paycheck.

“We’re not getting paid, and the inmates are eating steak,” Joe Rojas, a union chief at the Coleman prison complex in Florida, told USA Today. Rojas “remains miffed” over the dish, reported the Washington Post; the paper then listed an array of standard holiday dishes, called the inmate meal a “feast,” and published a quote from an inmate’s email that was copied by a guard who was screening it for security reasons. The Post made no mention of the potential breach of the inmate’s privacy. NBC News reported that one prison served “a fancy meal of steak and shrimp” on New Year’s Day, too. The tone of the articles ranges from outrage (“‘I been eatin like a boss’: Federal prisoners served steak by unpaid guards during shutdown”) to inappropriately punny (“Hard to digest: Inmates eat holiday steak during shutdown while prison workers go unpaid”).

A letter from 65 advocates for prisoners addressed to the reporters who produced these stories says the articles unfairly pit guards against inmates.

“People in prison have nothing to do with the federal shutdown. It’s not like a Dickensian meal of gruel for inmates on Christmas would have opened the government,” the letter reads. “Doing time is not easy and the holidays are particularly hard for incarcerated people. Often, the slightly-different-but not-necessarily-better meal is the only highlight of the day as people are separated from their families.”

Every person who knows someone in prison should discontinue subscribing to your publication.

Your argument: b/c the government can't pass a budget people in prisons should not get one of their ONLY special meals of the year

The authors of the letter, which includes Joshua B. Hoe, who hosts the Decarceration Nation podcast, pointed out that the tradition has been around since the 1980s and should “not be a contentious issue” if prisoners were “treated with human dignity.”

During the vast majority of the year, most prisoners are served cheap, unhealthy food. In fact, a Centers for Disease Control and Prevention study published in 2017 found that foodborne illnesses were 6.4 percent more common in correctional facilities, and that 6 percent of all foodborne illness outbreaks from 1988 to 2014 occurred in prisons. It gets worse: A Georgia facility was reported to be starving inmates in 2015. An Alabama sheriff was jailed in 2009 after he testified that he served corndogs twice a day, using an arcane law to pocket the $212,000 of extra jail funds meant for feeding inmates. Less than a decade later, another sheriff skimmed “more than $750,000 between January 2015 and December 2017″ meant for food, according to a recent AL.com investigation. In a Minnesota correctional facility, there’s one special day a week for inmate dining: the day they’re served eggs. The only other culinary option for most inmates comes in the form of overpriced “gift packs” of mostly pre-packaged junk food sold by private companies.

It’s not just the guards who are working long hours for little pay in prisons. In many state facilities, prisoners actually work on large farms—famously Parchman in Mississippi, Angola in Lousiana, and Cummins in Arkansas—to grow their own food. Federal prisoners, according to the Prison Policy Initiative, a nonprofit that advocates inmates’ rights, only make between 15 cents and $1.15 an hour working. Unpaid inmate labor led prisoners to strike last year.

Guards forced to work with no guarantee of pay over the holidays is tragic. People eating decent food on a holiday is not.