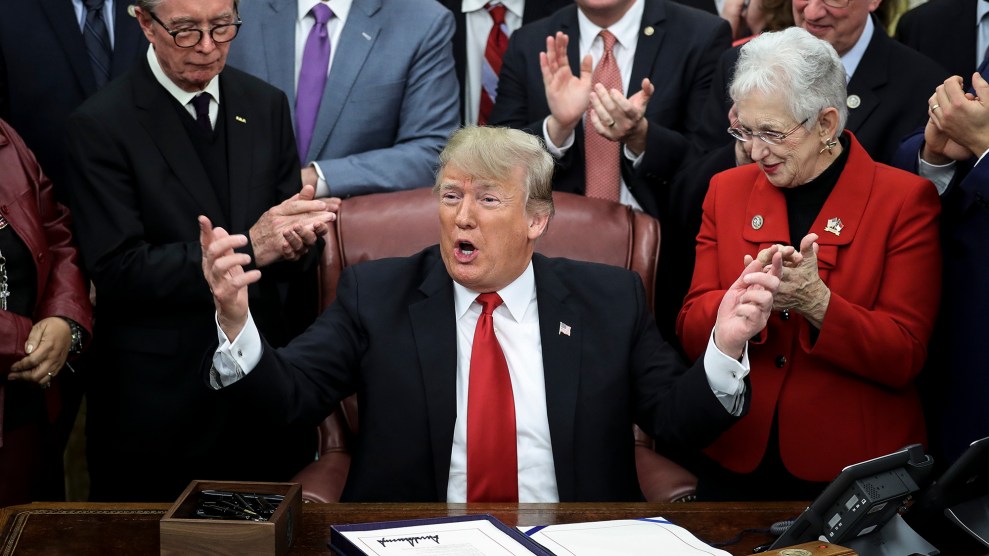 In mid-December, Congress and Donald Trump celebrated a rare bipartisan victory when the president signed a law to reform the federal criminal justice system. The First Step Act’s backers ran the ideological gamut, ranging from the American Civil Liberties Union to the Koch brothers; Van Jones referred to the legislative compromise as a “Christmas miracle.” But just a month later, advocacy groups that championed the bill are less than pleased with how it’s been implemented so far, claiming that thousands of well-behaved inmates who were supposed to quickly earn a reprieve have been forced to stay in prison longer than lawmakers intended.

The First Step Act, co-sponsored by nearly a quarter of the Senate and pushed heavily by presidential adviser and son-in-law Jared Kushner, was the first major criminal justice bill to pass Congress in about eight years. It tackled an array of prison and sentencing reforms, everything from curbing some mandatory minimum sentences to encouraging more prisoners to participate in job training. One of the most talked-about provisions concerned inmates who behave well in prison and earn what’s known as “good-time credits,” allowing them to shorten their time behind bars. The law stipulates that prisoners can use these credits to shave off as many as 54 days from their sentences each year, up from 47 days previously—a change that also applies retroactively. Before the measure passed, criminal justice reform advocates estimated it would allow about 4,000 people to get out of prison quickly, perhaps even in time for the winter holidays.

Before the measure passed, criminal justice reform advocates estimated it would allow about 4,000 people to get out of prison quickly, perhaps even in time for the winter holidays.

Lawmakers speaking in private to advocacy groups were reportedly clear that the credits would be recalculated right away—in order to take immediate effect—according to activists I spoke with who were involved in discussions about the bill on Capitol Hill and at the White House leading up to its passage. “There’s no doubt what the intent was,” says Jessica Jackson Sloan, national director of #cut50, an organization that seeks to reduce the prison population and that lobbied hard for the bill. “This stuff was debated ad nauseam publicly on the floor of the Senate,” adds Holly Harris, executive director of the Justice Action Network. “Legislative intent is very clear.”

On December 22, just one day after the First Step Act was signed, Vivek Shah, a federal prisoner in Chicago, tested that theory. He filed a habeas corpus petition in federal court seeking his immediate release from confinement because of the new rule on good-time credits. But in early January, US District Judge Sharon Johnson Coleman denied his request, saying that the law did not actually allow for his release until a later date. Technically, she wrote in her decision, the First Step Act stipulates that these extra credits can’t be doled out to inmates until after the Justice Department develops a risk and needs assessment program, a process that could take more than seven months, according to a deadline that she notes was laid out in the law.

Advocacy groups quickly shot back. The risk assessment, they argue, is specifically intended to help prisons figure out which inmates can spend extra days in halfway houses—a completely different point unrelated to determining which inmates can shave off time for good behavior. “There’s literally nothing in the good-time credits that has anything to do with the risk and needs assessment,” says Erin Haney, a policy director at #cut50. “These are people who are in good standing and have been given 47 days, and it just has to be recalculated to 54 days.”

The discrepancy in the policy’s interpretation seems to be a result of lawmakers putting the provision about good-time credits in a section that deals with the risk assessment program, a fact Judge Coleman notes in her ruling. Activists from the group FAMM, which advocates for families of incarcerated people, have suggested this was a legislative drafting error given the previous assurances about speedy recalculation of credits. “Everyone, including us, missed this mistake in the bill,” says Molly Gill, vice president of policy at FAMM. “We have notified lawmakers of the problem and asked them to fix it.”

To address the issue, lawmakers could pass a rider clarifying that good-time credits should be recalculated immediately, Gill says, or the DOJ could issue an administrative directive ordering the Bureau of Prisons not to delay the process.

“Everyone, including us, missed this mistake in the bill.”

But when contacted by Mother Jones, several lawmakers who co-sponsored the legislation declined to comment on the record about whether it was a drafting mistake or their intent to make well-behaved inmates wait for the risk assessment program. Taylor Foy, a spokesman for Sen. Chuck Grassley (R-Iowa), who helped craft the law and chaired the Judiciary Committee when it was passed, said it was not an error. “The text of the bill has been around for quite a while. It shouldn’t be a surprise,” Foy said, adding that Grassley hopes the risk assessment can be developed as quickly as possible. Sen. Dick Durbin (D-Ill.), one of the Democrats who championed the bill, declined to comment about his interpretation of the provision, as did Reps. Hakeem Jeffries (D-N.Y.) and Doug Collins (R-Ga.), who were crucial in drafting the legislation.

The Bureau of Prisons appears to be on the same page as Grassley. “We know that inmates and their families are particularly interested in the changes regarding good conduct time,” it said in a statement to Mother Jones. “While this change may result in additional credit for inmates in the future, it is not effective immediately nor is it applicable to all inmates.” The agency added that it would wait until “the risk and needs assessment system is issued by the Attorney General.” It did not say whether it had provided guidance on the matter to individual prisons, but at least two facilities sent the same statement to inmates in January, according to advocacy groups.

The Bureau of Prisons is likely in a holding pattern for the near future, since any directive about the First Step Act would “need the cooperation of the attorney general, which is what makes the Barr hearing so critical,” says Harris of the Justice Action Network, referring to William Barr, Trump’s nominee for the position. During his Senate confirmation hearing, Barr said he had “no problem” reforming the prison system and would “faithfully implement the law,” but his record of tough-on-crime rhetoric raises questions about the extent to which he would intervene to help inmates get out sooner. In 1992, as attorney general under President George H.W. Bush, he signed a report called “The Case for More Incarceration.” The Senate Judiciary Committee is set to vote on Barr’s nomination on February 7.

Matters were made even more complicated over the past month because of the record-making government shutdown. Lawmakers have largely been consumed by the impacts of the shutdown and negotiations over border security, while the Justice Department furloughed workers and delayed its development of the risk assessment program during those weeks. “So the long and short of it is that prisoners will end up waiting at least seven months, and likely longer, before they can get their sentences reduced with the extra good time promised under the First Step Act,” says Gill.

#Cut50 claims the White House is aware of the discrepancy. A spokesman for Kushner did not respond to a request for comment.

“So the long and short of it is that prisoners will end up waiting at least seven months, and likely longer, before they can get their sentences reduced with the extra good time promised under the First Step Act.”

The good-time credits aren’t the only aspect of the law that may need clarification from the future attorney general. The law gives judges more discretion to avoid handing down mandatory minimum sentences to people with certain limited criminal histories, but advocacy groups say it’s still unclear exactly which defendants can qualify for this sentencing reform. Some defendants who pleaded guilty before the law passed but haven’t been sentenced yet want to be eligible for the reform, known as the “safety valve.” Advocates say it will be up to the Justice Department to clarify whether they can be.

In the meantime, those 4,000 prisoners who hoped to be out for the holidays remain stuck behind bars waiting for answers. “Many inmates…are disappointed that nothing is happening,” an incarcerated man at the Federal Prison Camp in Duluth, Minnesota, wrote to me during the shutdown, speaking generally about the First Step Act’s implementation.