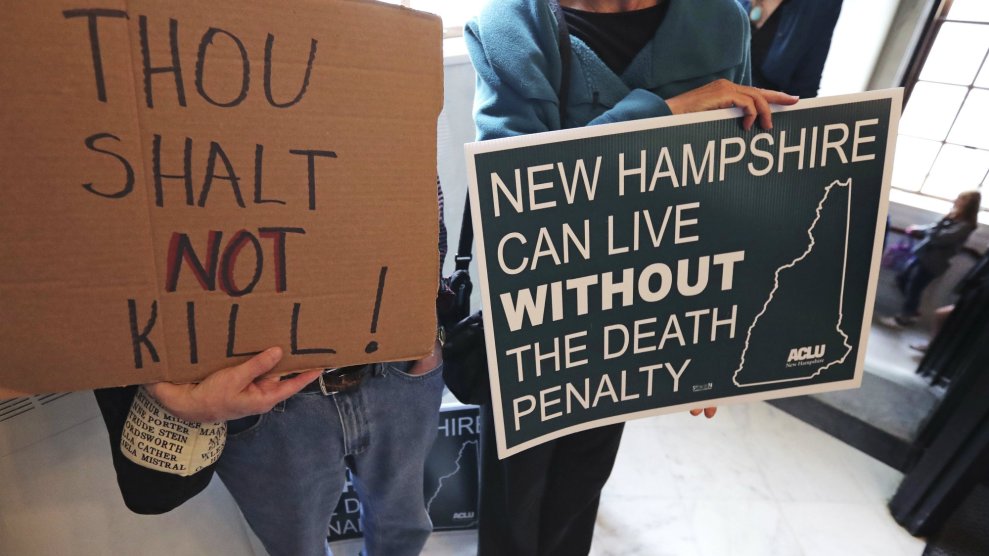 “The death penalty has been an issue every New Hampshire legislator has grappled with over many years,” Democratic state Sen. Donna Soucy said in a statement. “It was a privilege today to join my colleagues in voting to repeal capital punishment in the Granite State.” Last year, a repeal bill passed both the state House and Senate, but the bill was vetoed by Sununu and lawmakers didn’t have enough votes for an override.

On Thursday, Sununu said on Twitter that he was “disappointed” in the Senate’s override vote.

I have consistently stood with law enforcement, families of crime victims, and advocates for justice in opposing a repeal of the death penalty because it is the right thing to do. I am incredibly disappointed that the Senate chose to override my veto.

New Hampshire is the latest  to join the growing trend of states abolishing or putting a moratorium on the death penalty. Last year, Washington’s supreme court ruled the practice unconstitutional, and in March California Gov. Gavin Newsom imposed a moratorium, providing a reprieve for the 737 inmates on California’s death row.

But unlike California, New Hampshire’s death penalty was largely in name only. The last person executed in the state was Howard Long, who was hung in 1939 for sexual abuse and murder of children. And there’s only one inmate currently on New Hampshire’s death row. Michael Addison, a black man, has been on death row since 2008 for the 2006 murder of Michael Briggs, a white police officer.

Addison grew up in extreme poverty, and court documents allege that he suffered from an intellectual disability. The other defendant was John Brooks, a white multimillionaire who hired hit men to kill Jack Reid, a man he believed had stolen from him. Brooks and one of the men he hired to help him struck the victim with a sledgehammer. Addison was found guilty and sentenced to death. Brooks was also found guilty, but sentenced to life without the possibility of parole. Addison has been the only person on New Hampshire’s death row for the last 11 years. “The fact that the one person [on death row] is black and the state is overwhelmingly white is making people question the system,” Cushing says.

The law is not retroactive, so Addison will remain on death row, though it’s unlikely he will be executed any time soon. The state does not have the drugs needed for a lethal injection cocktail.