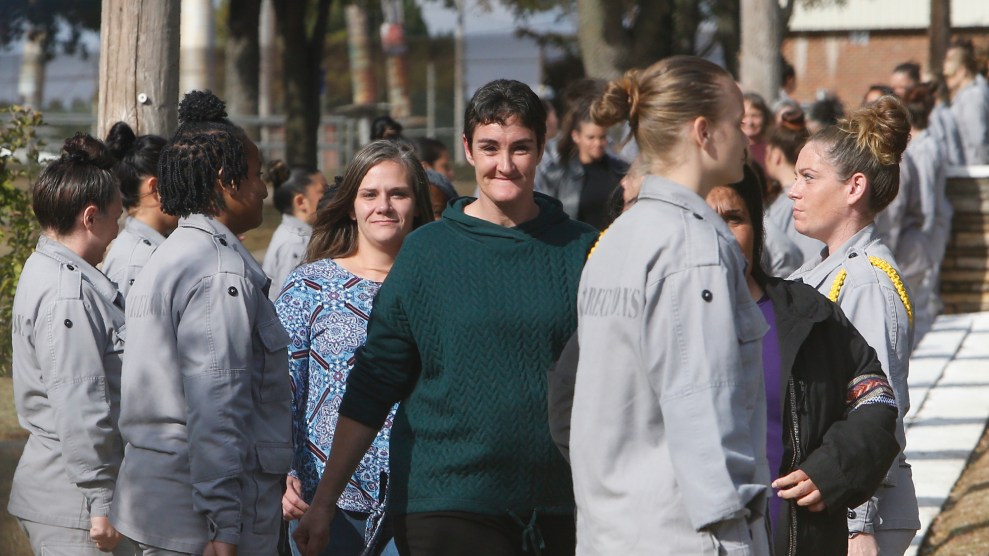 Inmates being released from the Eddie Warrior Correctional Center in Taft, Oklahoma on November 4, 2019.Sue Ogrocki/AP

Five and a half months ago, I wrote that “Oklahoma Is the ‘World’s Prison Capital.’ That Won’t Change Anytime Soon.”

At the start of this year, Oklahoma had the dubious distinction of having more people behind bars per capita than anywhere else in the United States, which itself locks up far more of its population than any other country. Then, last week, in what’s been trumpeted as the “largest single-day commutation” in the country’s history (not quite), Oklahoma released 462 prisoners who had been convicted of simple drug possession or low-level property crimes.

Jon Echols, a Republican leader in the state legislature who sponsored the bill that led to the commutations, crowed in a press release that “Oklahoma is no longer the nation’s top incarcerator.” According to Echols, the mass release meant the state prison system’s incarceration rate fell from 667.8 prisoners per 100,000 residents to 656.4—slipping behind Louisiana, which locks up 682.6 people per 100,000 residents. (These rates don’t account for jails, juvenile detention, or federal facilities.) In contrast, Norway has 75 prisoners per 100,000 people; Japan has 45. Whoo-hoo, Oklahoma: You’re now number two.

Not that there’s nothing to celebrate. The commutations are a solid example of the criminal justice reform movement taking root in red states as former lock-’em-up Republicans realize they can’t afford to keep incarcerating. But while each reduced sentence means a tremendous amount to everyone who went home last Monday—like Calista Ortiz, a mother of five sentenced to about seven years for drug possession—they affected about 2 percent of people inside Oklahoma’s bloated prison system, which held 25,770 people as of late October. And the state legislature had several chances this year to pass significantly more comprehensive reforms, but it punted on pretty much everything except for Echols’ bill.

As I reported in May:

The most ambitious bills would have shortened drug sentences, limited the use of cash bail, eased the reentry process for former prisoners, and reduced the use of lengthy terms for people repeatedly convicted of nonviolent crimes. Oklahomans for Criminal Justice Reform, a nonprofit led by the former Republican speaker of the state House, estimated that the bills would have cut the state’s prison population by 17 percent within a decade.

Despite bipartisan support for the measures, prosecutors in the state were reluctant to get behind them. Lobbying by law enforcement officials and bail bond companies derailed the bail-reform bill, which would have allowed judges to release low-level criminal defendants from jail even if they could not afford bail.

Echols’ bill expanded on a pair of ballot measures that passed in 2016, in which Oklahomans voted to reclassified simple drug possession as a misdemeanor and to raise the threshold for felony theft to $1,000. The ballot measures only applied to future prosecutions, but HB 1269 made them retroactive, allowing people already serving time to have their sentences reduced. (Another provision of the bill let 65,000 state residents wipe former felony charges from their records.)

However, not everyone serving time for such convictions was released last week. Rather than automatically freeing all prisoners who qualified, the bill routed their cases through the Oklahoma Pardon and Parole Board and Gov. Kevin Stitt. At a November 1 meeting, the board recommended sentence reductions for 527 of 814 imprisoned people with qualifying convictions. (The rest were not recommended because of behavior problems or protests from prosecutors.) Stitt approved the recommendations, prompting last Monday’s release (with the exception of 65 prisoners with immigration status issues or pending charges in other states).

Oklahoma’s much-hyped release perpetuates the myth that mass incarceration can be fixed simply by focusing on easing up on nonviolent drug offenders. Just 15 percent of the people locked up state prisons, which hold the vast majority of prisoners, are there for drug convictions; 55 percent have been convicted of violent crimes. Conventional wisdom holds that the idea of early release for people with violent felony convictions is a political third rail. (In 2015, President Barack Obama commuted the sentences of 46 federal drug offenders but declared he had no “tolerance” for violent criminals.) Yet Louisiana, which passed a raft of criminal justice reform bills in 2017, lowered its own astronomical incarceration rate by 7.6 percent in part by expanding probation eligibility and parole options for people convicted of certain violent crimes, and reclassifying some “violent” offenses as “nonviolent.” If Oklahoma truly wants to knock down its sky-high incarceration rate, it might want to look a little more like Louisiana.