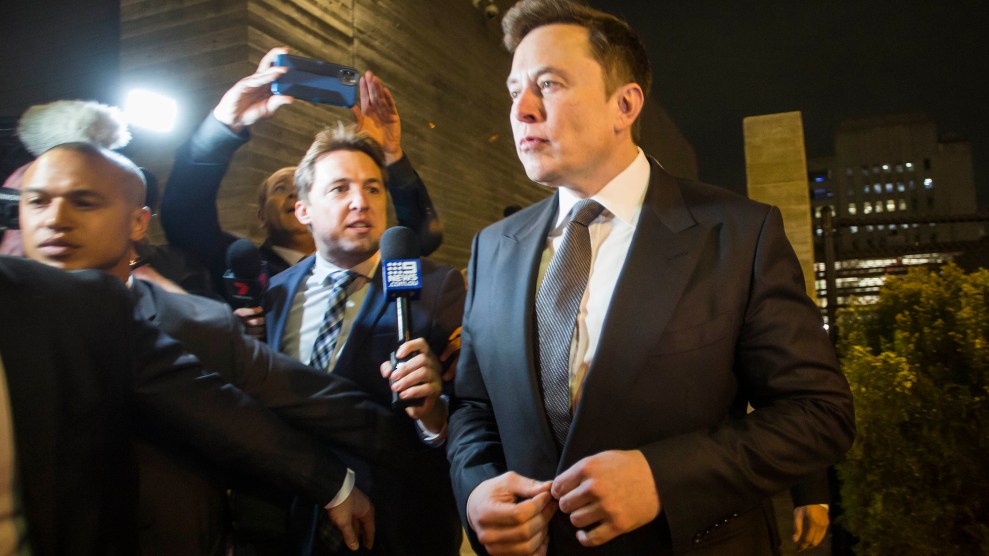 Elon Musk, leaves the US District Court, Central District of California in Los Angeles through a back door.Photo by Apu Gomes/Getty Images

A jury on Friday ruled in favor of Elon Musk in a defamation lawsuit filed by a British cave diver, whom the union-busting Tesla CEO had baselessly called a “pedo.” Cave diver Vernon Unsworth, who was on the team that helped rescue 12 boys trapped in a Thailand cave last year, had sought $190 million in damages, but his case ran headlong into the justice system’s curious tendency of letting rich people off the hook.

Musk went after Unsworth after the diver had criticized the billionaire’s contribution to the rescue, a miniature sub that was never used, as a “PR stunt.” In a tweet, Musk called Unsworth a “pedo.” He later deleted it, apologized, and later tried to clarify that he thought pedo meant “creepy old-man,” even though in emails with BuzzFeed News reporter Ryan Mac, he’d explicitly suggested that Unsworth was a “child rapist.”

As libel cases go, this one seemed pretty straightforward, given the defendant’s doubling down on the insult. But Musk is rich and popular (at least with a certain type of person), and largely for those reasons he gets to live outside the rules and standards of behavior that most people have to observe. The jury needed less than an hour to reach a consensus. Per BuzzFeed News:

One juror told BuzzFeed News the decision came down to the notion that a reasonable person could not read Musk’s “pedo guy” tweet and determine that it was associated with Unsworth. “The judge laid out five points for defamation as soon as we got to point two, which was about being acquainted [with the defamed person], we decided,” said Carl Shusterman, a Los Angeles attorney who served on the jury. “The people that read Musk’s tweet wouldn’t have known who he was talking about.”

The jury foreman, Joshua James, told the Associated Press that Unsworth’s lawyers had not proven their cases. “The failure probably happened because they didn’t focus on the tweets,” Jones said after the verdict. “I think they tried to get our emotions involved in it.”

Musk told reporters as he was leaving the courtroom, “My faith in humanity is restored.”

Unsworth said that he would not challenge the decision. “I accept the jury verdict, take it on the chin, and move on,” he told reporters outside court.

The defamation trial is only one of several legal issues Musk has dealt with recently. Tesla reached a $40 million settlement with the Securities and Exchange Commission last year after Musk tweeted that he was taking the electric vehicle company private at $420 a share, which he later swore wasn’t a bad marijuana joke.

There will be a lot of chinstroking in the coming days about the precedent established by the verdict, about what it augurs for First Amendment cases in the age of social media, as if you or I might now be similarly absolved if we were to start tossing around accusations of pedophilia on Twitter. Better, instead, to look at Musk’s case alongside his former PayPal partner Peter Thiel’s sabotaging of Gawker Media and the various libel cases brought by attorney-to-the-oligarchs Charles Harder, all of which point to a clear moral: Sometimes the First Amendment means whatever the wealthy need it to mean.