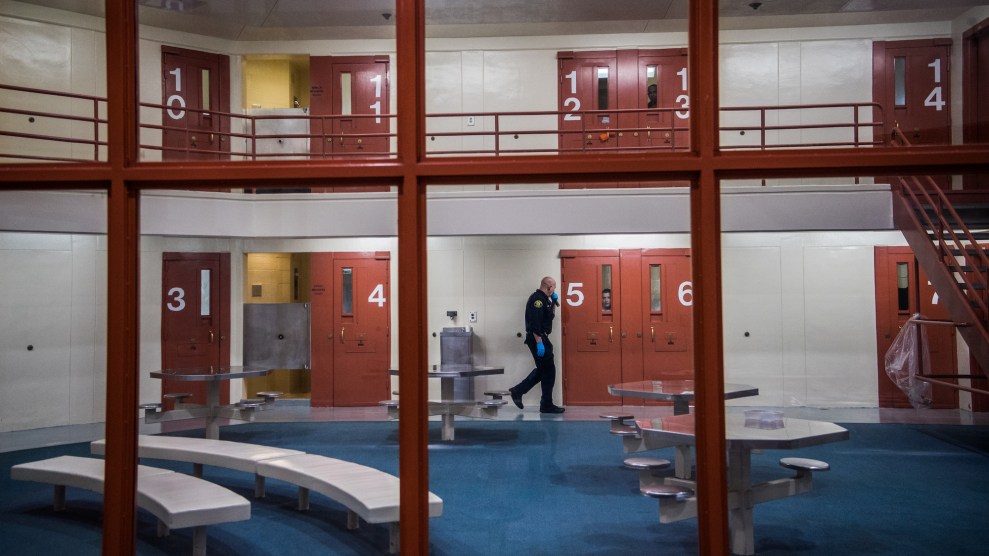 The last time Bert Davis was booked into Santa Rita Jail in Dublin, California, he was assigned to Housing Unit 31, the pod for inmate workers, and promptly sent to work in the facility’s industrial kitchen.

This was routine for Davis, who had cycled in and out of Alameda County’s main jail over the years, either awaiting trial or serving sentences for minor charges like drug possession and joyriding. He had a reputation as a hard worker who was willing to volunteer for extra shifts or stay overtime.

He never had an opportunity to say no to the kitchen assignments, Davis says, but in any case, he didn’t want to. Working gave him a little freedom of movement and a chance to spend days outside the cramped cell where he bunked with about 30 other men. He got to walk in the sun on his way to work, and swipe whatever extra food he could grab—maybe an orange or a packet of Kool-Aid with ice. “Ice is a big thing in there,” Davis, now 49, tells me. “A piece of ice and you’re living like a king.” These minor perks made it “better to be slave than it is not a slave,” he says.

When he was arrested in October 2018 and couldn’t afford bail, Davis was sent back to Santa Rita. He spent the next four months working eight hours a day in the kitchen. Monday through Friday, he prepared trays of food that were wheeled on robotic carts to the housing units or shipped to jails in nearby counties. The work was overseen by employees of Aramark, a $16.2 billion multinational food and facility services conglomerate. Since at least 2006, Aramark has held contracts worth more than $94.5 million to feed Alameda County’s inmates. Neither Aramark nor Alameda County paid Davis for his labor.

“Santa Rita and therefore the county are stealing the wages that have been earned as a result of the work of the prisoners.”

Now, Davis and seven other current and former Santa Rita inmates are suing Aramark, Alameda County, and Sheriff Gregory Ahern in federal court, arguing that the company “receives an economic windfall as a result of the uncompensated labor of prisoners confined in Santa Rita Jail.” The plaintiffs claim that their unpaid kitchen jobs were forced labor, a violation of the Constitution, the federal Trafficking Victims Protection Act, and a 1990 California law that requires private companies to pay prisoners fair wages. They’re suing on behalf of all Santa Rita inmates who have worked for Aramark, including people awaiting immigration proceedings.

“Santa Rita and therefore the county are stealing the wages that have been earned as a result of the work of the prisoners,” says Dan Siegel, one of the lawyers representing the kitchen workers in their class-action suit. “We speculate that it’s at least millions.” Siegel and the plaintiffs argue that they should have received wages on par with Aramark’s non-incarcerated employees and could be eligible for overtime pay under California’s labor code.

In a legal filing, Alameda County has said that if anyone is on the hook for inmates’ unpaid wages, it’s the “private business” that employed them. “The whole operation is run by the Aramark corporation,” says Sgt. Ray Kelly, the sheriff’s office spokesperson. “We just kind of facilitate.” (The county has also argued that the inmates did not follow the proper steps for filing grievances before suing, as federal law requires.) Kelly explains that the county’s arrangement with Aramark is less expensive than paying wages and benefits to non-incarcerated employees. The county also makes money by selling meals made in the Santa Rita kitchen to jails in Amador and San Joaquin counties. (Aramark did not respond to a request for comment.)

The lawsuit is part of the growing movement against a prison labor system which pays inmates cents on the hour (or nothing at all) for doing mandatory cooking, cleaning, and maintenance, or work for private companies. While the 13th Amendment bans slavery, it makes an exception for work performed “as a punishment for crime,” essentially permitting forced labor in prisons. During national prison strikes in 2016 and 2018, prisoners in several states stopped work, refused food, or staged sit-ins to draw attention to injustices they likened to modern-day slavery. “Overseers watch over our every move, and if we do not perform our appointed tasks to their liking, we are punished,” strike organizers wrote in 2016. “They…have replaced the whip with pepper spray.” A series of recent lawsuits has made the case that immigrants locked up in for-profit detention centers, most of whom have not been convicted of a crime, are illegally forced to do menial jobs for little or no pay to maximize private prison companies’ profits.

The origins of the Alameda County suit can be traced back to a former inmate named Scott Abbey. Last February, Abbey read an op-ed about alleged civil rights violations by the county’s Sheriff’s Department. With Davis’ help, Abbey, who was serving a sentence in Santa Rita at the time, convinced about 30 inmates to sign a letter (below) to the article’s author in which he described poor working conditions in the jail kitchen. Abbey’s letter eventually made its way to Siegel’s law firm. “They’re making money off of using us prisoners and we’re not getting anything in exchange except for one better meal per day, and maybe easier living,” Abbey says.

The suit—which its lawyers believe could be the first of its kind involving a county jail—alleges that sheriff’s deputies forced inmates to work by threatening them with solitary confinement or longer sentences if they refused, or with firing if they needed take a sick day. Davis says that when he tried to take a day off to attend a GED class, he was threatened with being “rolled up”—fired from his job and transferred to another housing unit. Both Davis and Abbey say they know inmates who refused to go to work who lost up to 30 days of “good time” credits, extending their time behind bars.

Kelly, the sheriff’s spokesperson, says inmates were allowed to quit their jobs or turn down kitchen assignments without punishment, but those who refused to go to work could face disciplinary action including losing good time credits or commissary access. “This is not a free society,” Kelly says. “You’re in jail, under jail rules. You have to comply with those rules.” But he stresses that inmates who volunteer for kitchen jobs “really do enjoy the work” because it offers a way to pass the time and socialize.

“This is not a free society. You’re in jail, under jail rules. you have to comply with those rules.”

In October, male inmates in Housing Unit 31 staged a hunger strike and work stoppage over poor living conditions, including insects and vermin in their food, and lack of access to cleaning supplies. (Kelly admits that Santa Rita struggles with rodent control, but he denies that the jail has sanitation problems.) The striking workers were fired from their jobs. Sheriff’s deputies allegedly forced female inmates to work extra daytime shifts during the strike, telling them that unless they worked, they wouldn’t be fed, according to the lawsuit, which includes two women who were brought in to break the strike.

For more than a century, California prohibited companies from using prisoner workers out of concerns that they would exploit the cheap labor. Then, in 1990, voters passed a ballot initiative that allowed sheriffs and the state corrections department to sign work contracts with private companies as long as inmates’ wages were comparable to wages on the outside. Facilities could deduct taxes, restitution payments, or room and board fees from paychecks, but inmates were required to receive at least a fifth of their wages.

Even if 80 percent is taken off the top, earning and saving some money gives inmates resources to draw when they leave jail, says EmilyRose Johns, one of the Santa Rita inmates’ lawyers. “It could mean the difference between some semblance of stability and homelessness,” she says. “Between some sense of stability, and reoffending out of necessity or out of lack of options.”

Now that he’s out, Davis can finally go to school. This month, he’s starting to work toward a welding certificate as part of a “restorative integrated self-education” program run through a local college. Financial aid will help him pay for it, but wages from his months working at Santa Rita would have helped far more as he rebuilds his life.

During a meeting in late December with Johns, Davis emphasizes that he’s not participating in the class action suit for the money. He’s doing it to stand up to the sheriff’s office, which he believes is breaking the law. “Not everybody who’s locked up is a complete idiot or miscreant,” Davis says. “Some of us do have brain cells and can function in society, and we know what’s right. And”—he taps on the table to emphasize each word—”this is right.“