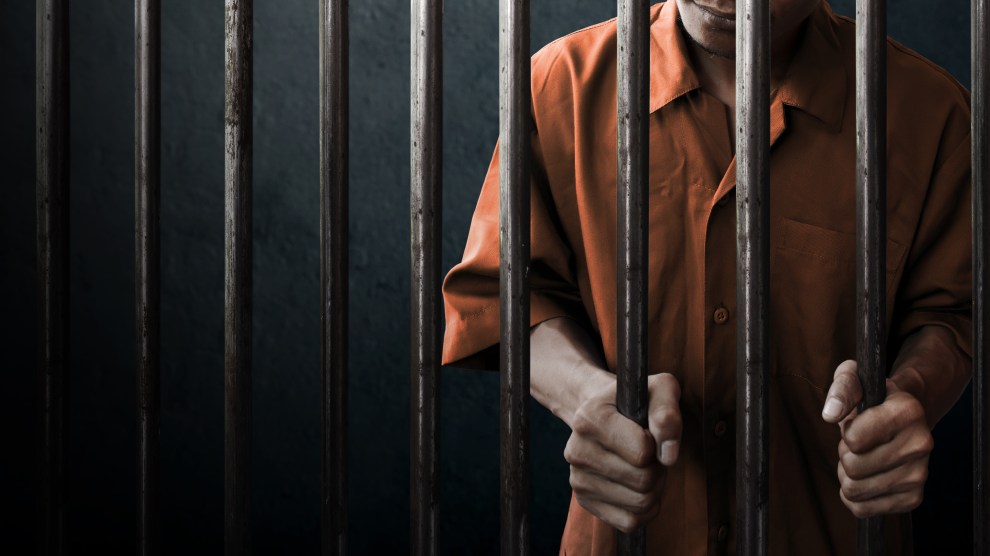 As the coronavirus spreads in every state, one of the most dangerous places to be is in prisons. Incarcerated people know it. They’re aware that when an infectious disease gets inside, it gets around fast, and resulting medical care often leaves much to be desired. Prisons around the country are now on high alert trying to prevent a coronavirus outbreak among inmates, many of whom are elderly or have preexisting conditions. But it may just be a matter of time: In China, the virus has sickened hundreds of prisoners, while Iran has released 85,000 incarcerated people to slow the disease’s spread.

I talked on the phone this week with a 41-year-old man who’s serving a 37-year sentence at a federal prison in Sandstone, Minnesota. In early March, a flu outbreak swept through the facility, and some of the sickened prisoners were isolated in solitary confinement, he says. The inmate, who requested that I didn’t print his name, told me about his experience during that outbreak, and says he fears coronavirus could be much worse.

About three weeks ago, a few people just got sick, some sort of flu. Since we’re in a dorm, when a virus starts, it spreads very quickly. And there’s really no way to get around it because we share a bathroom—and there’s like 60 guys on each side of the unit.

I was one of the first people to get sick, a couple of weeks ago. And man, I tell you, my fingers were sore, my elbows were sore, my whole body was sore. It was a deep cough, and a sinus thing too. My whole head and throat. The reason I didn’t go to medical, and a lot of people don’t go to medical, is because all they’ll do is charge me $2 for copay and then tell me to go to commissary and buy ibuprofen and Tylenol. Since most of us average $12 a month for pay, it isn’t worth it to go. I just tough it out.

There’s really no way to get around it because we share a bathroom.

Over a quarter of the population probably had a cough or headache from the flu. There are still guys that are sick in my unit. Since the news of the corona thing, when people started to get this flu, they decided to “quarantine” them: They brought them into a converted card room in one of the other units. But they still had to come out and use the bathroom. Say there are four urinals, four commodes, four showers that people share—they were only allowed to use the last one, and that was their solution. But that’s not really a quarantine.

One of my buddies was outside the card room, and he was asking why the staff came in with a mask on. And the guys walk through without them on. They’re like, “Nothing’s wrong.” But then, like, why do you guys have masks on? We’re trying to isolate people or keep people separate—it’s virtually impossible in this setting. It’s almost like it wasn’t considered before, and now it’s gonna be a big deal in a couple of weeks, for sure.

After the guys raised a lot of concerns about the people in the card room, they ended up closing that quarantine and moving them to the SHU [solitary confinement]. So now every guy who has the flu is in the SHU. There’s probably 20 guys at least, maybe more. Putting them there could discourage others from reporting if they get sick—I’ve heard people say that already. The last thing you want to do is be locked in a cell with no shower or hot water or your own personal property.

It’s interesting, because they say there have been no confirmed cases of coronavirus [here]. But how many test kits are available? To the best of my knowledge, I don’t know anyone who’s been tested.

We do have hand sanitizer in multiple places throughout the institution. So they’re good about doing that. But it’s not alcohol hand sanitizer because people would drink it. So I don’t know if that’s going to kill all the germs that it needs to kill. But they’ve actually been coming around with bleach. I’ve been locked up for 17 years, and I’ve never seen them come around the units and wipe stuff down with bleach, like the staff, and they’ve been doing that.

Another thing they are doing is calling in chow a lot, calling people to dinner slower, so there’s less than 200 people in the same area at the same time. But we all share phones and computers, so there’s like 50 computers for like 500 people. They also suspended visits, so there’s no outside people coming in. The only way it’s gonna come in now is by some staff. If somebody is feeling sick, are they gonna stay out or not? But from what I heard, the incubation period is 5 to 14 days.

So if it gets bad, what are they gonna do? They’re not gonna be able to treat us all. There’s no designated medical unit. They’ll probably have to clear a whole unit—move everyone out that isn’t sick and start moving people that are sick in there.

What could they do if this whole place, if 60 percent of the population here, had it?

I’m more concerned about the older guys. This is a different care level institution because we’re not close to a hospital, because we’re up in the middle of northern Minnesota. So if someone has a certain amount of care level needed, they’re not even at this institution. So that’s good I guess. But there’s a few older guys I’m friends with that would be in bad shape if it got here.

Everybody’s talking about it. Every time somebody coughs, people are joking, oh corona, because we’re trying to make light of the situation, but what could they do if this whole place, if 60 percent of the population here, had it? You know? There’s nothing, nothing they could do. And I feel like that’s something that should have been considered when they’re sentencing us to all this time.

This interview was edited and condensed for clarity. The Federal Bureau of Prisons, in a statement, said the prison in Sandstone “has appropriate health services staff and a medical room,” and “is equipped with space to respond to medical issues as clinically warranted.” The bureau’s plan to address coronavirus calls for screening, testing, and other infection control measures.