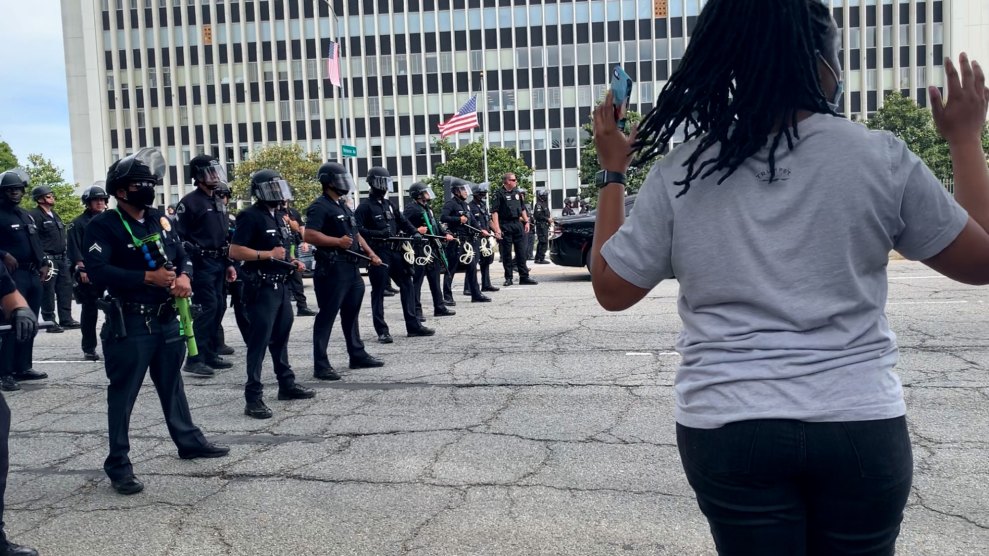 Police move in to begin arresting people at a protest in Los Angeles June 1, 2020.Fernanda Echavarri

Monday afternoon, while I was out reporting at a protest in Los Angeles, a young man grabbed a megaphone and began telling the crowd that it was almost 3:30 p.m. and that it should start to disperse. “The National Guard is surrounding us, curfew is 4,” he said. “We know you want your voice heard, but we need you all to please get home safely, we need you guys back here in the coming days and weeks because this shit is not over.”

Some in the crowd seemed confused, others tuned him out—the curfew wasn’t supposed to start until 6 p.m. In the end, only a few people seemed to leave. The rest continued peacefully protesting against police violence and decades of police killings of African Americans. Then, shortly after 3:30, many of our cell phones went off with that piercing sound of emergency alerts: “Curfew now 5 pm- 6 am” in the County of Los Angeles, officially moving it up an hour—an alert that county officials later said was meant for Glendale and sent out countywide by mistake.

A few protesters then asked me if I could clarify what the real curfew was, and if I could explain what could happen if they were to keep peacefully protesting past 5 p.m.

When I saw a group of law enforcement officials (including armed members of the National Guard) starting to move closer to the protesters, I walked over to try to get clarification on what was going on with the curfew. A deputy with the LA County Sheriff’s Department told me, “Right now it’s kind of being changed a couple times…so we’re waiting on word from our command staff about what approach we’re taking at what time.” I asked him if law enforcement would declare this an unlawful gathering once the curfew started and he responded, “Time will tell, we’re still within an okay curfew time.”

With that extremely unhelpful answer, I walked away, and a few protesters then asked me if I could clarify what the real curfew was, and if I could explain what could happen if they were to keep peacefully protesting past 5 p.m. Honestly, I was just as confused as they were.

I was also concerned. The lack of clarity here can have real consequences. The difference between one hour and the next could lead to arrests for those violating curfew or, as Andrea Ritchie, a criminal justice and race researcher at Barnard College for Research on Women, told me Tuesday, “it could also mean life or death for somebody, because we’ve seen what police can do.”

“It’s the exact opposite of what should be happening,” she added.

Chicago Mayor Lori Lightfoot gave merely 35 minutes’ notice to the public when she announced a curfew on Saturday for 9 pm. Many — including the American Civil Liberties Union of Illinois — pointed out that it was unfair to issue the order while public transportation was suspended, restricting Chicagoans’ ability to get home quickly. Lower-income people who can’t afford to call a ride-hailing service are particularly likely to be vulnerable to arrest in such situations.

Curfews are increasingly a tool of choice, albeit a blunt one, in cities that are scrambling to respond to the ongoing outrage over the killing of George Floyd at the hands of Minneapolis police. The Los Angeles County Sheriff’s Department said the curfew was needed because “the effects of public calamity caused disaster and extreme peril to the safety of people and property,” according to a public statement. “Because of the dangers which often occur under cover of darkness and the difficulty to preserve public safety during these hours, a curfew was ordered.”

But, here’s the question: Do curfews even work? Or maybe I should ask, who do curfews work for?

The first thing Ritchie told me was: “Curfews definitely work to increase possibilities for criminalization and police violence. We can guarantee that they work for that.”

She added, “Responding to a protest of police violence with more police violence and more criminalization is the absolute worst possible response if you’re trying to address the issues that protesters are raising right now.”

Historically, curfews have been used to suppress dissent and uprising. Most notably, when Black Americans protested in the streets in the 1960s to demand equal rights, cities responded with strict curfews. “People were shot and killed by police enforcing curfews,” Ritchie told me. “So the reaction of the young man you witnessed yesterday who said ‘we should go home’ is the intended impact.”

In 1992, Los Angeles imposed curfews after the beating of Rodney King. The Los Angeles Times reported that the arrests for curfew violations and other “civil disturbance” offenses outnumbered those of looting, and that 51 percent of those arrested were Latino and 36 percent were Black. More recently, late-night curfews were put in place during the Occupy protests in 2011. But the magnitude of the curfews across major US cities in the past few days is pretty much unprecedented.

There’s widespread confusion about the rules of the curfews, their carveouts, and their consequences—even for Ritchie, who also serves as a legal observer at marches and protests. She told me that a few days ago she and other legal observers didn’t know if they would be exempt from the curfew or not. At Mother Jones, we’ve scrambled to figure out if journalists are exempt in all locations. And while essential workers are supposed to be exempt from curfews across the country, many individuals are unclear about whether or not they classify as essential workers or how to prove to police why they’re outside. “Curfews are completely arbitrary in terms of the time, and completely arbitrary in terms of enforcement,” Ritchie says.

The consequences of that confusion also vary depending on where you are and who the police officer is—you could get a warning or a ticket, get arrested, or be shot at with rubber bullets for violating curfew.

“I’m incredibly worried about the violence of enforcement of the curfews and the way it literally gives police departments carte blanche to round up, arrest, beat, and pepper spray entire Black communities.”

So far, many protesters in Minneapolis, New York City, Chicago, Washington DC, and Los Angeles, among other cities, are figuring this out by defying their curfews (mostly to continue protesting peacefully, but also for looting). An event in Oakland planed for 8:05 p.m. on Wednesday—minutes after curfew begins—encourages participants to sit down at “the intersection of 14th and Broadway to say an unequivocal ‘F***k your curfew!’” And Monday night in Washington, DC, police trapped nearly 70 protesters who sough refuge in a man’s home during a post-curfew protest. The protesters remained in the man’s home until the curfew was lifted at 6 a.m. the next morning, while police camped out in front of the home waiting to arrest anyone who left.

This type of enforcement is made all the more dangerous given that we’re in the middle of an economic crisis and a public health pandemic—and all the above is likely to cause disproportionate harm to communities of color, Ritchie said. She told me that Monday night, she had a difficult time sleeping because she was concerned with the police activity past curfew in her predominately working-class neighborhood in Brooklyn. What about the people who need to simply get fresh air? Or take their dogs out? she wondered. What about a woman in a violent situation at home who needs to get out? What about the nurse who’s commuting back from work in the middle of the night? “I’m incredibly worried about the violence of enforcement of the curfews and the way it literally gives police departments carte blanche to round up, arrest, beat, and pepper spray entire Black communities, and entire communities of people who are protesting,” Ritchie said.

While Ritchie is worried, she is also careful to emphasize that she understands why people are still on the streets. “People are protesting in defense of their own lives, they’re saying the state is killing us through the police, through abandonment and lack of [COVID-19] testing and universal health care, and through creating the structural conditions around housing and employment that put us at risk of literally dying every day,” she said.

With the curfews in place, “now my mere presence outside is potentially a crime.”