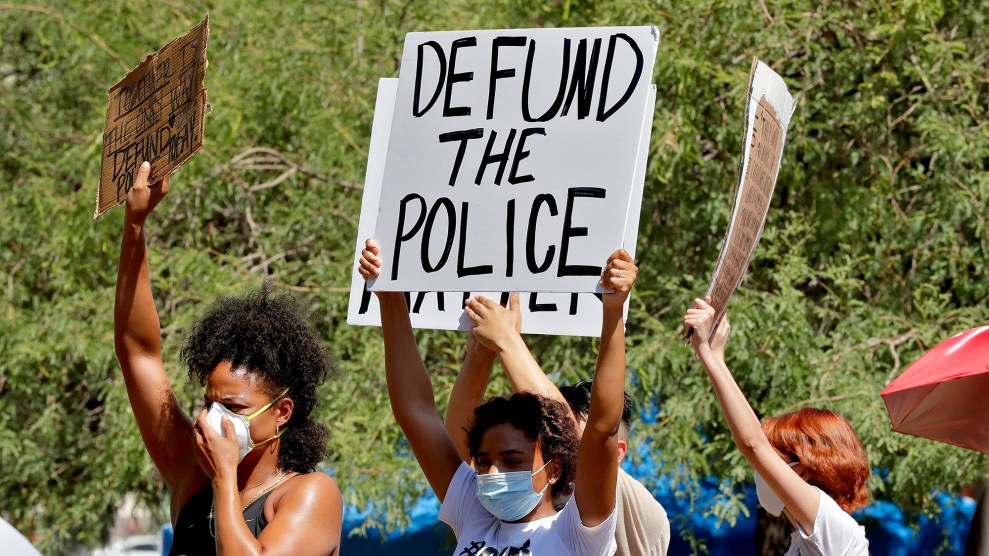 Los Angeles Mayor Eric Garcetti announced at a press conference on Wednesday night that he will cut $100 to $150 million from the Los Angeles Police Department and reinvest those funds “in black communities and communities of color.” Despite its liberal reputation, Los Angeles has the largest jail system in the United States, leads the country in deaths by police, and was the birthplace of many military-styled policing tactics, like SWAT teams. The mayor’s announcement is the latest sign that politicians might be starting to respond to the demands of protesters following George Floyd’s killing at the hands of police. As my colleague Madison Pauly reported earlier this week, efforts to cut funding for police have already taken root in Minneapolis, where the police department’s budget currently totals $193 million, with other campaigns afoot across the country.

Defunding the police, which might at first read as a seemingly radical proposition in the United States, is a reform many criminal justice activists have been fighting for a long time. Lex Steppling is one of them. Steppling is the Director of Campaigns and Policy for Dignity and Power Now, a grassroots organization in Los Angeles that has been fighting to cut back the organs of punishment in the city, like the massive LA County jail system, the sheriff’s office, and ICE. It’s working: In 2019, the group was part of the coalition that fought against the $1.7 billion expansion of the LA County Jail, and won, convincing city officials to invest that money in a mental health treatment facility instead.

Mother Jones Podcast host Jamilah King talked to Steppling over Zoom this week about what it means to fight for real reform in this moment. You can read an edited version of that conversations or listen to it on this week’s episode of the Mother Jones Podcast:

Jamilah King: First, let’s just start with the basics. How are you doing?

Lex Steppling: “How are you doing?” has become an oddly intimate question. I’m doing all the ways. I always try to think of that Charles Dickens line. “It was the best of times, it was the worst of times.”

The call to defund police is landing in a way it should have landed a long time ago. That’s really encouraging. Simultaneously, the constant flow of state violence in our communities is traumatic, and it’s exhausting, and it’s painful. Sometimes you have a moment where something happens in plain sight, where there’s a collective reckoning that everybody experiences together. Lots of good comes from that, and lots of trauma is compounded by that at the same time.

“The call to defund police is landing in a way it should have landed a long time ago. That’s really encouraging.”

My organization, Dignity and Power Now, works with families who’ve gone through that. It’s a daily struggle. While hen a moment consolidates in the consciousness of everybody, and people take to the streets in the way they’re doing right now, it’s really important to look at it as an organic function of what happens when you live in a system that’s mediated by violence. That’s why the defund conversation is saying that it really is time. It’s been time. It’s always been time to to take resources away from a system that perpetuates so much violence.

We’ve just seen another wave of recent violence in the United States. The killings of Ahmaud Arbery, Breonna Taylor, George Floyd. What are the primary systems that are putting black and brown lives at risk that need reform?

There’s an apparatus. It’s important to consider the relationship that exists between a DA’s office, a police department, the sheriff’s department, a jail system, and a probation department. They exist in a vacuum of accountability. Judges play a huge part in this as well and probably are able to do it with the last remaining veil of secrecy left with regards to this system.

We’re in an era where there’s a democratization of information. One question that comes up for folks in L.A. all the time is, “I wonder what it would have been like in 1992 had there been access to communications platforms the way they are now?” That was an era where sheriff’s departments, police departments, probation departments, judges and DA’s offices got to operate with quite a bit of secrecy and quite a bit of opaqueness. And that’s not the case anymore. As painful and traumatic and disgusting as it is to have to bear witness together, it also helps inform a conversation the right way. For years we had to rely simply on the anecdotal experiential storytelling that we had as communities who’d been impacted. Now, everybody’s seeing that that’s always been true.

“As painful and traumatic and disgusting as it is to have to bear witness together, it also helps inform a conversation the right way.”

Why did you think the police need to be defunded?

If you ask ten people, you’ll get ten different answers. And I think all ten of those answers would be valid. You can start with a conversation that’s free of any agenda, which is to say, if you look at jurisdictions across the country, and you look at the pie graph of resources, and you see how much of a locality’s resources goes to policing and law enforcement, it’s shocking. We all live in cities right now or counties where our local officials are telling us we don’t have the resources to to help with housing, food, mental health, schools, or infrastructure. Our advocacy is often met with a resistance from our local officials that’s mediated by this austerity analysis. That is rendered invalid when you actually look at this pie graph and you see the amount of resources that go to law enforcement. In the case of Los Angeles, it’s over half of our budget. And every year increases it increases and it increases. Public health models that are administered by public health experts work ten times out of ten, and yet they get so much less compared to law enforcement.

What are some of the specific steps that you recommend as alternatives to incarceration? What do you think an ideal version of a divestment from punitive institutions looks like?

We were really successful here in L.A. County with the Justice L.A. campaign. We stopped the expansion of what was already the biggest jail in the world. L.A. County wanted to increase the size and scope of its jail system via a $3.5 billion expansion plan, which was going to be bond money. It was going to cost us probably $7 billion. Not only were we able to stop the expansion of L.A. County jail, but we were able to push the county to do something different. [The LA County Board of Supervisors] created a work group called the Alternatives to Incarceration [ATI] Work Group. It was actually a really beautiful example of what civic democracy should look like. It was an eight-month process. We ended up with the ATI Report, which was the holistic set of recommendations of what L.A. County could do instead of jailing.

We finally have a chance to do something different and no longer be the wrong kind of leader. Divestment from policing, and all of the peripheral departments and mechanisms that go into policing, is not actually a radical demand. That’s a sensible demand. The only thing radical about it is that it’s a departure from a longstanding set of norms. But those norms have done nothing but harm.

So, as you said, it seems like calls to defund the police are gaining traction in this moment. That’s something that seemed pretty politically impossible in the past. Why do you think it’s different now?

That’s a great question. What’s different now? From our point of view, for too many years, advocacy organizations were not run by people from the community. It allowed for people to make compromises in the halls of policy change that betrayed the most acute needs of the community in exchange for an expedited political victory that could then be fundraised off of. We cannot rely on Democratic Party consultants who are alienated from the community. Nothing we are demanding is impossible. We’re demanding things that are completely sensible, completely feasible, often more economically feasible. They’re just different from what some of these folks are used to.

“If you work really hard to crack open opportunities to tell the truth, it eventually works. I think we’re in a moment where that is starting to work.”

Too much is happening in plain sight now. It was really interesting in the last couple of days to watch mainstream news outlets covering the protests throughout the country. It seemed like they really wanted to provide a narrative that sided with the police. And the police made it impossible because over and over and over again, in city, after city, after city, the instigators and the aggressors were the police. That’s nothing new. But the surfacing of a dialog that acknowledges that is new. If you work really hard to crack open opportunities to tell the truth, it eventually works. I think we’re in a moment where that is starting to work.